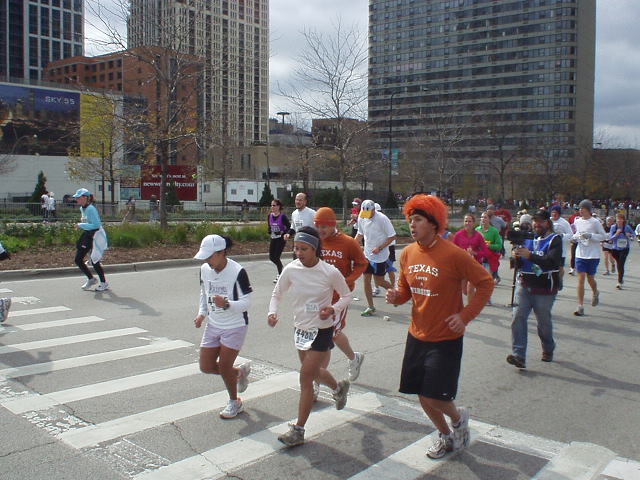 Every once in a while, it seems, things don’t turn out the way one had expected.

No, I’m not talking about Iraq, although for the French-bashing war-mongers in D.C., that may hold true. Nor am I alluding to the Pittsburgh Steeler’s Cinderella march through the playoffs last year, even though that was a great victory!

Instead, I am referring to my training in the critical weeks before the 2006 Chicago Marathon. I was in California and desperately needed to get in a run (or two) lengthier than my long jaunt of 19 miles in Fort Collins. Twenty-four miles would have been good. However, as it turned out, my attempts to run in the San Francisco Bay Area proved to be disastrous as chronicled in this blog entry. Indeed, about the only good run I did out there was a wonderfully wooded run through the trails of Woodside with Alyssa the Sunday before the big race.

The situation was perhaps even bleaker for my Chicago friends, Kathrin and Guy. The two of them had registered for the race early in the year, but when I saw them for their wedding in August, they both insisted they were not going to do the race due to having no time to train due to work and their upcoming honeymoon. A month later Guy had changed his tune to being “theoretically still registered for the race” along with “optimistically planning on doing the marathon,” but Kathrin remained adamant about being just a spectator on October 22nd.

In fact, I think Kat got tired of my incessantly asking her, “So are you going to do the race? Yes, yes?” that one day she wrote me,

We’re excited too! I just wish you’d stop pestering me about the marathon—I won’t do it (as I told you back in August)—you’re going to have to trust me—it’s just not a good time for me right now between work, new house, etc., and really, that’s ok. There will be other chances in the future.

Her message was pretty clear, so I was a little surprised when—the day before the marathon—she woke up a little early to run for the very first time in a month: three miles. Actually, I didn’t think much of it until 10:00 p.m. that night when she started asking me algebraic math problems such as, “To finish a marathon in 6:30, if one ran at 10-minute pace and walked at 20-minute pace, how many miles would she have to run?” (The answer is about 13.)

Or—on the morning of the marathon—“To finish a marathon in 6:30, if one ran at 10-minute pace and walked at 15-minute pace, how many miles would she have to run?” I think my response (about 1 mile) really buoyed Kathrin, because then she decided that—barring a disaster along the course—she would attempt to do the race after all despite her three miles of training.

Due to the notoriously bad Chicago traffic, the three of us took an early morning train instead of driving. As the weather forecast called for high temperatures low enough to render refrigerators unnecessary, each of us had skull caps on our heads. Guy and Kat noted how we looked just like thugs, or, better, rappers.

After the race I confessed that I was hoping that the frigidness of the air would help reduce any muscle soreness that would develop during the race, much like bags of ice.

“Hey, is that another one of your ‘theories’?” Kathrin teased, no doubt recalling many of my other off-the-wall running postulates of yore.

With not much time to spare we parted ways after dropping off our warm-up clothes at the check bag station. I then scurried over some crowd-control fences like a chipmunk to the Preferred I Start Area, which was reserved for runners who had run sub-3:35 marathons in the past.

Recalling how I told Guy earlier that morning that my strategy was to stick like glue to the 3:20 pacers as long as possible until I could no longer hang on, I looked for guys and gals with 3:20 placards pinned to their backs.

The first to take off after the national anthem were the wheelchair racers. A few minutes later my group commenced the journey. As we crossed the start line, I noted that despite how we were packed like sardines in a tin can in the start area, this critical mass was not really slowing us down as we started running, at least those of us with the preferred starts.

Miles 5 and 6: 6:54 and 7:06, respectively. These splits seemed accurate to me despite comfortably cruising along. Furthermore, by this point most of the 3:20ers were behind me and I was in a sea of 3:10 pacers. Now I was inspired. 3:10, after all, is the time I need to achieve to qualify for Boston.

“So this is how it feels like to be running for Boston,” I thought to myself, noting how I had never approximated Boston pace at any point in marathons prior. Then, with new resolve: “Today I’m giving Boston my best shot. I am going to try to keep up this pace as long as possible…”

I passed a wheelchair racer around here. Moments later, I settled in behind a tall runner who—in addition to moving his legs as quickly as possible—was juggling three balls. Amazingly, in the two miles I trailed this guy, he did not drop a single ball. It’s doubtful that the balls provided any additional draft but in any case it made for interesting commentary by spectators as we passed by. (“Hey, there’s Juggle Man!” exclaimed several watchers.)

After Mile 9 I had decided to go ahead of the juggler, whom I never saw again. My tempo remained sub-Boston pace all the way to the halfway point of the race, where I noted my half-marathon split.

1:34:20. Forty seconds under an ideal Boston-qualifying split. A new half-marathon PR, faster than any previous race where the total race distance was 13.1 miles. Today would entail 26.2 miles, however. So the question was, could I maintain the pace or would I run out of gas?

By Mile 15, I could already tell that my legs were getting tighter. I reached down to my gel belt to grab a Clif Shot. My dexterity was lacking as I had loose full-fingered gloves on, so I took the right glove off and stowed it in my jacket pocket. Mistake! Almost immediately the glove fell out of the pocket and by the time I realized this, it was long gone. As the temperatures were holding steady at 39 degrees, this was a critical error.

My digits became chilled so quickly that Frosty the Snowman would have refused to shake hands with me. Eventually I retracted the hand within my jacket sleeve and only popped it out like a turtle’s head when I would pass by the water stations to grab a cup of Gatorade.

Ultimately, I decided that protecting my hand in this manner was messing up my biomechanics so I took it out of the sleeve again. Moments later I tried to take another Clif Shot out of the gel belt. To my dismay, my digits were so frozen that I had zero grip strength and the fingers may well have been coated with Teflon. Finally (like 30 seconds later), I extracted the gel package from the belt… and promptly dropped it.

“Butterfingers,” I grumbled to myself, continuing on sans gel but with even chillier fingers and squandered time.

Finally, up the road, I stooped down to pick up a castaway black glove off the road. It took some effort to put it on but it was worth it. Never mind that before the race was over, I dropped yet another gel…

Also never mind that it was so cold outside that the gels were no longer liquid. Instead, they had the consistency of refrigerated old-fashioned peanut butter, thick enough that I actually had to chew them after squeezing them out of their packages into my mouth.

By Mile 21 my mile pace had crept over eight minutes and the Boston dream was over. Especially since my left calf was beginning to get tight! I hastily took a Tylenol in hopes that it would ward off a cramp to no avail. For the last 4 miles of the race my left calf was right on the threshold of cramping and I did not dare pick up the pace one iota lest it seize up tighter than a vise and I would have to stop.

At Mile 25, a whole group of 3:20:xx pacers passed me. I did not even think about trying to keep up and just focused on doing my best without cramping. With 800 meters to go came the course’s one and only “hill”, which was about the length of a long highway overpass, but less steep.

I crossed the finish line and noted my time: 3:22:31, a new personal record. Despite the less-than-optimal second half I was certainly happy with that time. 3:22, after all, was a goal I set a year ago for 2006, wanting to halve the deficit of my then-PR (2005) of 3:34 and the Boston qualifying time of 3:10. Right before the race I thought that with my meager training, realistically, that would a big stretch.

Then again, I didn’t quite envision running for Boston during this race either.

After refueling and picking up/putting on my warm-up clothes, I headed straight towards the Runner Update tents. I inquired about Guy and Kathrin’s progress. Guy apparently had gone by the 30-km (18.7-mile) mark at 3:32, indicating that he was still doing well. More surprising was that Kathrin was only seven minutes behind Guy, which could only have meant one thing.

“Kat is actually running this thing!” I thought.

I trotted over to a point along the course 800 meters from the finish, hoping to see Guy and Kat come on in. During the time I was out there, I was colder than an Eskimo even though I was now wearing a long sleeve shirt under my jacket and polyester-lined pants. Sadly, I never did see either of them come in, as confirmed by Guy who called me to say both of them had completed the race in about 5 hours and they were now in a Starbucks.

Ironically, Kat’s unexpectedly good finish was a tinge bittersweet for her. “It almost makes me lose respect for the marathon,” she explained, “to be able to do this distance with virtually no training!” (Note: though she did not train this time around, Kat did run two marathons a few years ago, including a 3:42— astounding for her first try. She has some talent…)

For Kenya’s Robert Cheruiyot, the race also ended unexpectedly. He eventually won the race but never got to run through the finishing banner. This is because just a few feet away from the finish line, he slipped, fell, and went under the banner like a baseball player sliding to first base, hitting the back of his head in the process. Unfortunately, what should have been a glorious moment in his career became an oft-replayed “hey, look at this!” blooper which you can watch here, courtesy of YouTube.

Amazing splits! Can't wait to get the full scoop on the race. Hope your recovery is going well. :) ↩ Reply

Ouch, calf cramps! I feel your pain! Sounds like it was a fun race, though. Reading about running with your hand tucked in your sleeve made me laugh a little because that's how I run when I'm cold. I can't be bothered with gloves, and I have short arms, so it works out well for me. :) ↩ Reply