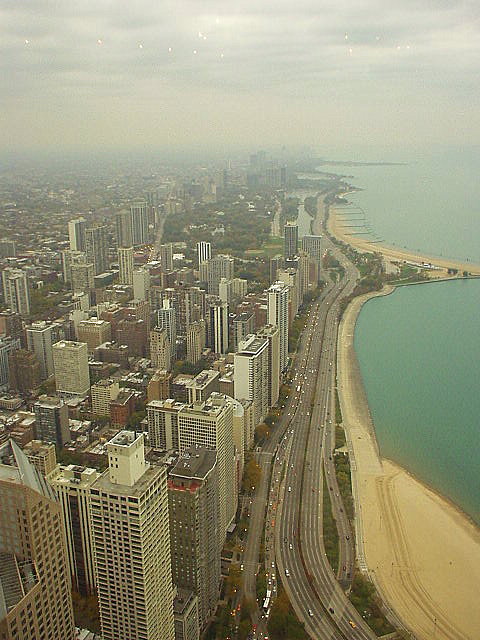 “Chicago,” I wrote a friend the first time I visited there, “is one of the few places in the nation where traffic is MUCH worse than the San Francisco Bay Area.”

That was back in August for Kathrin & Guy’s wedding. Back then, traffic into downtown at 10:00 p.m. on Saturday night was crawling slower than a centipede overdosed on pesticides, and note that the only special event occurring was a snooze-inducing game of Major League Baseball. At other times, it took me 20-40 minutes to find street parking.

Fast forward a couple of months to the weekend of the Chicago Marathon, and try to imagine the potential mayhem when 40,000 runners and their families from all over the world invade America’s “Second City.”

Actually, the traffic situation was not as bad as you might imagine. Then again, it helps to hold low expectations when trying to navigate through or park in this place. Within the city proper itself, one may as well be traveling by horse and buggy, as a 4-wheeled motorized vehicle will not be going any faster.

“Sixteen dollars to park here for 20 minutes!” exclaimed one of my friends, lamenting the parking rate at one of the parking garages near the expo we went to pick up registration materials. “And that’s a ‘special rate’ for the marathon…”

With some driving around, though, we managed to find some free street parking. Miracles of miracles…

Actually, once you get past the driving and parking situation, Chicago is quite nice. The skyline—which includes the U.S.’s tallest skyscraper, the Sears Tower—is a stunning mix of avante garde and high-powered commercialism. Many districts seem really clean, though Kat and Guy pointed out a few shady areas to me.

Then there is the vast, blue-green body of water called Lake Michigan. It abuts Chicago’s eastern shores. In the summer, there are many people sunbathing or playing volleyball in the sand only about 100 feet from the streets of the motorized rat race. Must be quite a sight.

Speaking of which, this is a good place for people watching. There are lots of really good-looking, superbly dressed people here with conduct themselves with seemingly less haughtiness of Southern Cal’s la-la land. Score one for the midwest.

Yet, all sorts of trendy, upscale chain stores line the business districts, including Room & Board, Crate ‘n’ Barrel, Bloomingdales, the Nike Store, the Apple Store, etc. Unfortunately, Kathrin and Guy did not take me to the “American Girls” store. Too bad!

We did go up the Hancock Observatory, where there were some spectacular bird’s eye views of the Windy City. It was worth the $11 admission fee, at least for one’s first time.

Of course, there are all sorts of restaurants here too. At my request, we went to an authentic Chicago-style pizza joint called Pizzeria Ora. The deep-dish pizza took 45 minutes to prepare (we were warned about this ahead of time, so it was no big deal), but was really good! Just be sure to, say, run a marathon to burn off the calories afterwards. 😉

All in all, we all enjoyed our time in our Chicago, even if the end of the days found us, once again, mired in traffic. Sometimes, the destination is worth the slow drive.