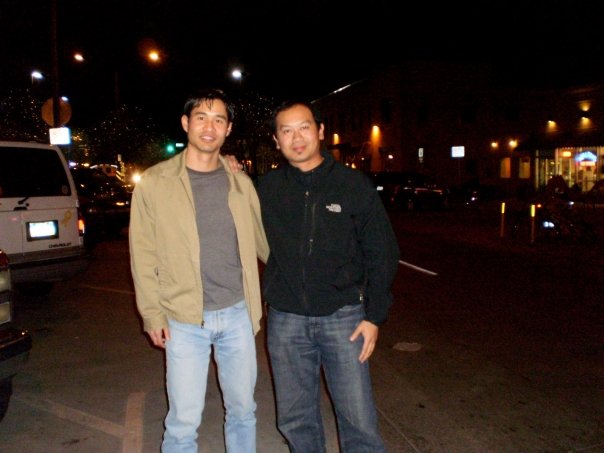 For the last couple years, whenever a winter holiday came around I’d get to see Bandy, an ol’ buddy from high school. It helps that I have family in California where he lives, and he has cousins in Northern Colorado where I reside. This Thanksgiving we were able to hang out again because he came over to the Rocky Mountain State for five days.

As I already hosted an early Thanksgiving dinner with friends, I was free to join him for a bona fide feast with his cousins in Erie on the actual Turkey Day. Inside their warm home we consumed enough turkey, beef and shrimp to satisfy a month’s worth of USDA protein requirements and had on hand more dessert than even the Cookie Monster could eat.

We also watched the Denver Broncos end their four-game losing streak by steamrolling the New York Giants while Bandy’s delightful cousin Leanne studied the latest People Magazine. Using analytical skills befitting of her Ph.D., she rated each of the A-list actors who had the misfortune of having their photos plastered inside the gossip rag and also told us about her boyfriends who had names like Johnny Depp and Rain. Before retiring for the night she gave me a much undeserved nickname of “the Dessert Thief” and, in general, teased me enough to make me wonder how Mr. Depp could put up with her.

A few days later, Bandy and I drove down to Colorado Springs where we went to visit my friends Lisa and Jeremiah. I had not seen Lisa since August when we hiked up Mt. Bierstadt. Since then Lisa and Jeremiah had gotten married and bought a house.

After they showed us around their new, sweet pad, we had lunch in Colorado City and a tour of Colorado Springs and Manitou Springs. Our last stop was The Incline, a former railway that shoots up 2,100 feet with an average grade of 41% that Lisa used to jog up regularly earlier in the year.

Later that evening, Bandy headed up to Fort Collins with me so he could see my beloved hometown for the first time. We stopped the Rio Grande, where happily my friend Kimberley was able to join us for dinner at the last minute since I had not seen her in about two months.

On my buddy’s final day in Colorado, we went for a morning run of 3-miles around my neighborhood, starting from my home and wending through the trails by Richards Lake, the Fort Collins Country Club, some horse and elpaca farms along hard-packed dirt roads, and finally back onto the Hearthfire recreation trail. Bandy—who ran a half-marathon in San Jose last month—seemed pleased to be able to do some altitude training, try his doctor-prescribed orthotics for the first time, and witness the beauty of Northern Colorado that is my virtual back yard.

In sum it was a great visit with my bud, and I’m looking forward to possibly seeing him again during the next winter holiday. By that time I should have even burned off the calories from all the Thanksgiving dessert I ate.