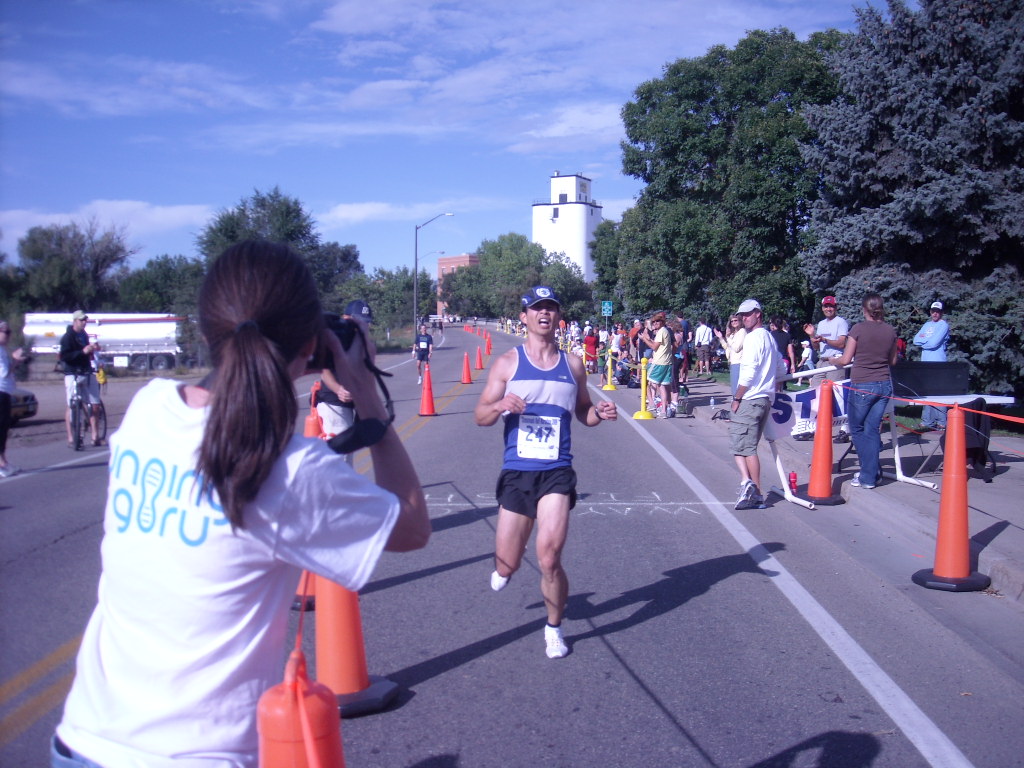 I had never run a sub-1:30 half marathon before, but I fully believed it was possible. For one day in the future at least—just not when my longest run in the last five months was a mere seven miles or when I was not at an oxygen-enriched altitude lower than 5,000 feet. But some races bring out the very best in a person especially when the course and the weather are perfect, when they’re in his home town, and there’s enough of his friends to pack a classroom. This was the case with the Crossroads Half Marathon in Fort Collins.

Who was there? A lot of my running buds who could make up a virtual Who’s Who of runners from Larimer County, including Alex, Brad, Cat, Celeste, Connie, Eddie, Scott, Steve, and Tina. During race number pickup I also bumped into my friend Kimi who was helping organize the event as a volunteer for the local Crossroads Safe House.

And then there were those I was happiest to see because they came out to watch the race and offer moral support specifically for me. Namely, Tanya and her kids. We hung out together for the first half hour before the race, and Tanya managed to keep the kids from being bored out of their minds for the duration of the event. She also took pictures. Yes, she’s very sweet.

Anyhow, so I was extra motivated to put in my best effort. I lined up in the second row right behind Steve and Brad in this race of 400 people. I did have a strategy as a result of playing with a spreadsheet the night before while envisioning different scenarios for finishing the race in under one hour thirty minutes. Microsoft Excel crunched numbers that were, frankly, daunting to me (bottom line: I needed to run 6:45-6:59 miles with an average of 6:52/mile for 13.1 miles), so ultimately I settled on a game plan of Just Run Hard.

I ran fairly aggressively right from the gun so I was quite surprised when I passed the Mile 1 marker and my stopwatch read 8:45. If this was my actual mile split then my chances of finishing the race in 1.5 hours were already less than Democrats and Republicans achieving consensus on a health care bill. But the time reading was so pessimistic that I knew it couldn’t possibly be correct.

Thankfully, my time split at Mile 2 seemed credible as would almost every other mile marker. I was feeling great—not so much effortless as energized with spring in my step.

At Mile 4 the course wound back on the Poudre Creek Trail close to the start. While it was too far away to see Tanya and the kids, I did hear my name called out by Alex and Kimi who were cheering on the sidelines. This buoyed my spirits even more and I was really in a groove.

By Mile 6 I was feeling so good that I overtook a trio that had been ahead of me for the last miles. However, this turned out to be a tactical error as—having no one to follow and the navigational inclinations of an island castaway without a compass—I made a wrong turn. Fortunately, the trio behind immediately called me back on course so I only lost 6-10 seconds, something I felt pretty confident would be insignificant in the final analysis.

Around Mile 9 I was ecstatic about how I had been running but was beginning to feel like a sports car whose tires had lost a few psi. Actually, my normally indestructible feet were starting to develop some hot spots indicating the onset of blisters. It seemed, then, that as a result of running infrequently this year, my feet had become significantly less calloused. I was used to not getting blisters even in ultramarathons with holes in my socks so this was a genuine surprise.

Within the next mile, the third place woman caught up to me and we swapped leads a couple times around an aid station (to save time, I ignored every single water stop knowing that I would have no problems running without food or water for 13.1 miles). Ultimately I could not keep up but it still seemed like I had banked enough time to finish under 1:30.

At the Mile 12 marker my stopwatch was reading 1:20, which would have meant I had 10 minutes to run the last 1.1 miles! But that amount of time seemed so ridiculously off that I knew the Mile 12 marker was wrong—plus I was fairly certain that (from using gmap-pedometer.com the night before) Mile 12 was still a few blocks ahead at the intersection of Mulberry and Remington Street.

So by this point I knew that finishing under 1:30 was going to be really close. I dug deep, inhaling and exhaling every two steps and desperately tried to put the bounce back into my steps that I was losing the last few miles. I mentally prepared myself for a wild finish the moment I could see the railroad tracks 0.2 miles from the finish along Lincoln Street.

Sometime around 1:29, I crossed them. All-out sprint! I looked at my watch one last time when it read 1:29:34 and the finish line was plainly in sight. I focused on leg turnover as my lungs were about to explode. Then I imagined Tanya and her kids at the finish, and within a few moments I was actually seeing them. I concentrated on not slowing down one iota until I had safely stepped over that finish line.

When I did, I clicked off the watch. After giving the kids some high fives and Tanya a big hug, I looked at my stopwatch and showed her my time: 1:29:59. I did it, I achieved the time goal by the thinnest of margins! But that was by my own timing, which I started when I had first crossed the start line. I knew that my official time could be as much as one second slower since I started in the second row.

In fact, my official time was 1:30:00. Groan. So it’s questionable whether I did achieve my time goal. If individual timing chips were used like in bigger races—or if I didn’t lose those 6-10 seconds by making the errant turn midway through the race—I certainly would have, yet the official time clock said no.

But it’s mostly academic. Regardless of the time, this was one of my all-time great races. Besides being my fastest half marathon to date, it was at altitude with virtually no training. All fueled by the belief in a possibility and some extra motivation provided by good friends and a wonderful woman and her kids. That it happened in my home town among them made it all the more special.