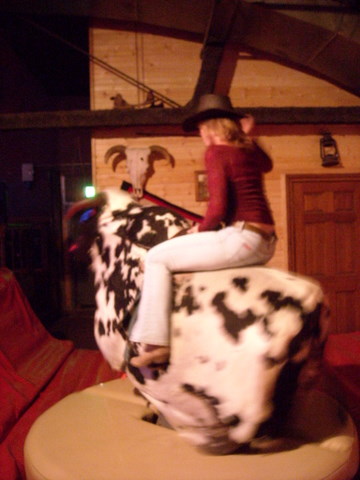 Roller skating nights sort of fizzled out; there were no more Passion Parties to attend; and I declared myself “retired” from a karaoke career shorter than William Hung’s. One might suspect, then, that life in Northern Colorado for my friends and I had suddenly become more boring than pouring through a programming manual on C++. But this was not the case. No, not with gal-pal Ryan living here. Somehow she always manages to find new places for fun, exercise, and doing things more off the wall than sweeping leaves off the front porch with a mop.

The latest venue we’ve been frequenting is the Sundance Steak House & Saloon in Fort Collins. You might guess that this is a fine establishment for chowing down huge chunks of beef and it probably is, but with a vegetarian or two in our group the food was never the biggest draw. Neither is the beer, as it seems to be lacking most of my favorites from the Fort’s finest microbreweries like New Belgium and Odell’s.

Instead, we mainly come here to shoot pool and do the cha-cha, the two-step, the waltz. Yes, dancing to country western music. Never mind that my dance moves are generally more uncoordinated than a robot’s and I had just about given up on country music ever since Alan Jackson started singing songs about not knowing the difference between Iran and Iraq. One of these days my two left feet will learn how to slide, step and shuffle—I just hope they do in less time than it’s been taking the rest of my body to learn how to swim well, otherwise I will be looking more foolish than a linebacker trying to learn the ballet for quite some time.

In the meantime, there have been plenty of other ways we have managed to keep ourselves entertained at the Sundance Steak House & Saloon. Some were sanctioned and encouraged by Sundance; others were not. Below are video clips from some of the weekends we’ve had there.


Jon leg wrestling the “female state champion” who challenged him. Yes, she was quite drunk.
Ryan riding the mechanical bull; yee-haw!
Tanya arm wrestling Jon. Despite looking super cute in her cowgirl hat, she was not able to distract Jon enough into losing.
Folks swinging to a live band on the dance floor.