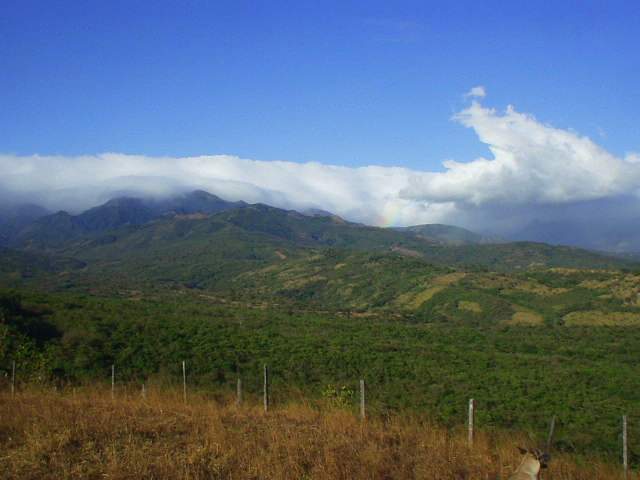 Reinforcing this thought were the horror stories related to me by friends about their first (and hence last) time riding a horse. This included Tori’s experience in which, out in Belize, she rode a horse that refused to do anything but go in an uncontrolled trot, turning what was supposed to be a leisurely ride into a panic-inducing death-gripping rodeo for her. Which understandingly made her decide without a doubt that she was NOT going to be joining me in this round of horse riding.

Fair enough. I just hoped I got a tame horse.

Picking me up at Habla Ya was Franklin, my horse riding guide. We took the road out of Boquete that Tori and I had taken the previous day to go to the Caldera Hot Springs, and I was pleased to find out that I’d be returning to Caldera again. During the drive over we talked about Latin music and U.S. politics exclusively in Spanish, though it turned out he was very fluent in English as well despite never having taken a single English class (“I learned by listening to 80s rock music,” he explained.)

Twenty-five minutes later after leaving Habla Ya, we arrived at Franklin’s home which sported a horse farm out in back. Knowing that I was a first timer, he set me up with Mercedes, who was so named because she “has a soft, comfortable ride.” Franklin spent a couple of minutes explaining to me how to manipulate the reins to communicate directional control to the horse before mounting his a white stallion aptly dubbed Blanco. In addition to the horses, a couple of Franklin’s dogs would be joining us.

Soon after, the six of us (two humans, horses, and dogs) meandered through some iron gates, over narrow streams, and onto the switchbacks of some hillsides. The hills we traversed were honey-colored, as this was Panama’s dry season, and Caldera can be a little warmer than Boquete. I briefly thought about how this terrain resembled the wheat fields of Colorado, although as we trudged higher and higher and could see farther and farther into the distance over the course of an hour, I realized this was where the similarities ended.

When we reached the top of the foothills we were surrounded by far-reaching, panoramic vistas of the surrounding mountains and serene valleys blanketed by lush rain forests. Although there was primarily blue sky on top of us, over these hilltops in the distance were low-hanging clouds and in one spot, even a rainbow. Aside from our horses and dogs, not another soul was in sight, and the only sounds aside from our voices were from a gentle breeze rustling the grasses.

“So you get to see this every single day?” I asked Franklin, gesturing to the views in front of us.

“Well, almost every day. Usually at least four days a week,” he replied.

“Amazing,” I remarked. Then, pausing, I added, “You have a good life.”

And I felt similarly, not only in getting a tame horse, but having the opportunity to be here in front of these vistas preciosas talking with Franklin. I would even say that I would ride a horse again, and if not, I can’t think of better place to have ridden a horse for my first and last time than the hills of Caldera.

I really enjoy the hills of Caldera, Franklin and horses. ↩ Reply