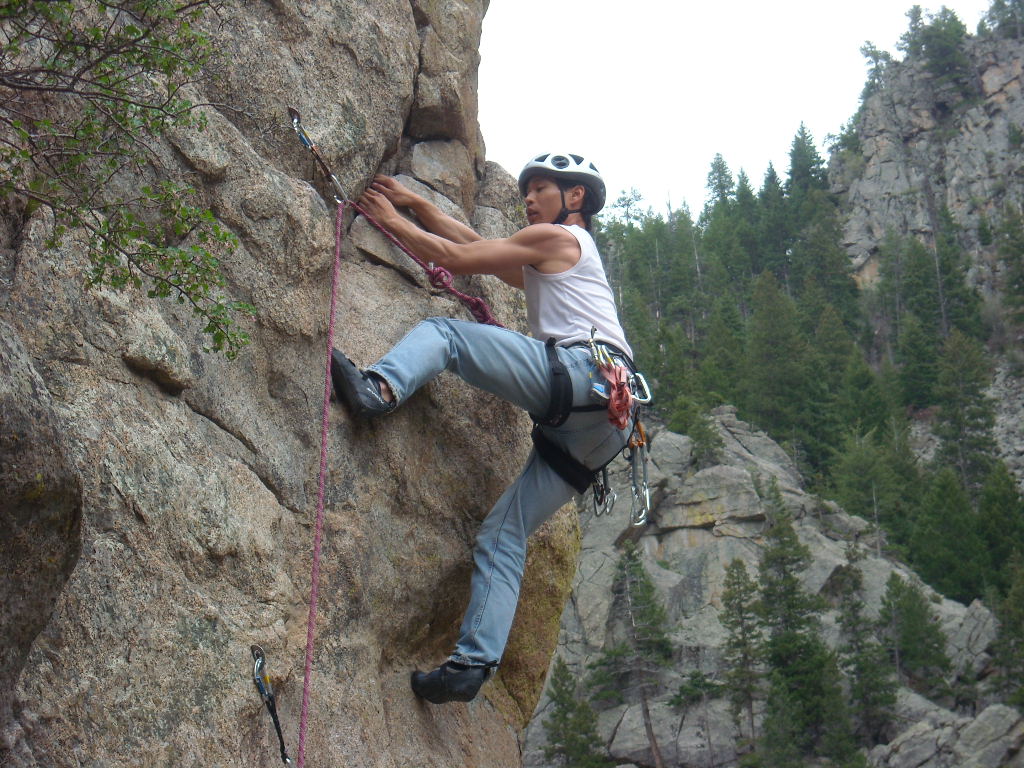 Anita and Derek had returned to Fort Collins after living in Hawaii for half a year, so what better way to celebrate than to return to the activity in which we first met: rock climbing. With the weather turning warm over the three-day weekend, we piled into Derek’s car and headed over to Boulder Canyon to do a few outdoor climbs.

Once we got to the proper parking area in the Boulder Canyon, it took us over an hour of quad-busting, foot-slipping scrambling to find Mine Hole Crag, which actually would have not taken long to get to were it not for our navigational skills. Once we found the crag, we started out on Sofa Kingdon, which was about 5.9 in difficulty.

I got the honor of leading this route and being the first to climb on Anita’s new rope, and found Sofa Kingdom to be a pleasant slab. The crux was a mantle move one-third up—a move I could do, although I soon found myself stuck in this position and unsure where to place my right hand next. After 30 seconds of this I resorted to grabbing the quickdraw I had clipped before the mantle, and then saw a three- (or two-) hole pocket I could barely reach. If I seen this earlier, I shouldn’t have needed to grasp the quickdraw, which was cheating!

After Derek pink pointed Sofa Kingdom and Anita top-roped it, we moved over to What’s Mine is Yours—a 5.9 directly over the mine hole. Derek red pointed, I pink pointed, and Anita top-roped. “That was like a gym climb,” I said after going up, since it was short (35 feet) and had a number of interesting, off-balance moves with good holds once you found them.

After the two climbs at Mine Hole Crag, we scrambled down the canyon to The Boulderado, which was literally just a few feet over Highway 119 and across the road from Derek’s car. Here I lead Qs, which was a straight up-and-down climb that looked a bit more intimidating than its 5.9+ rating would suggest.

The crux was right before the third bolt, and I made the mistake of loading all my quickdraws on the right side of the harness. I did this because it looked like I’d be climbing to the left of all the bolts and it didn’t occur to me that I’d have to clip some bolts with my left hand like at the crux. Yet I managed to do the maneuver even if it took a few more seconds than it should have, having to cross my left arm in front of my body to grab a quickdraw from the right side of my harness.

“Phew,” said Derek (on belay) after I clipped into the bolt. “I was a little nervous there because if you fell, you could have decked.” I was less nervous because my arms were fresh and the hold I was hanging off with my right hand felt bomber.

The rest of the climb was fun, with solid but pumpy moves. It was best just to move through as quickly as possible. After I topped out and was lowered, Derek and Anita went up on toprope before declaring we were done for the day.

When we got back to the Fort we had a nice dinner/snack at Ras Ka, a wonderful little hole-in-the-wall restaurant with excellent food. It was a fine way to end the day with my friends who—up until now—had been doing more surfing than climbing this year.