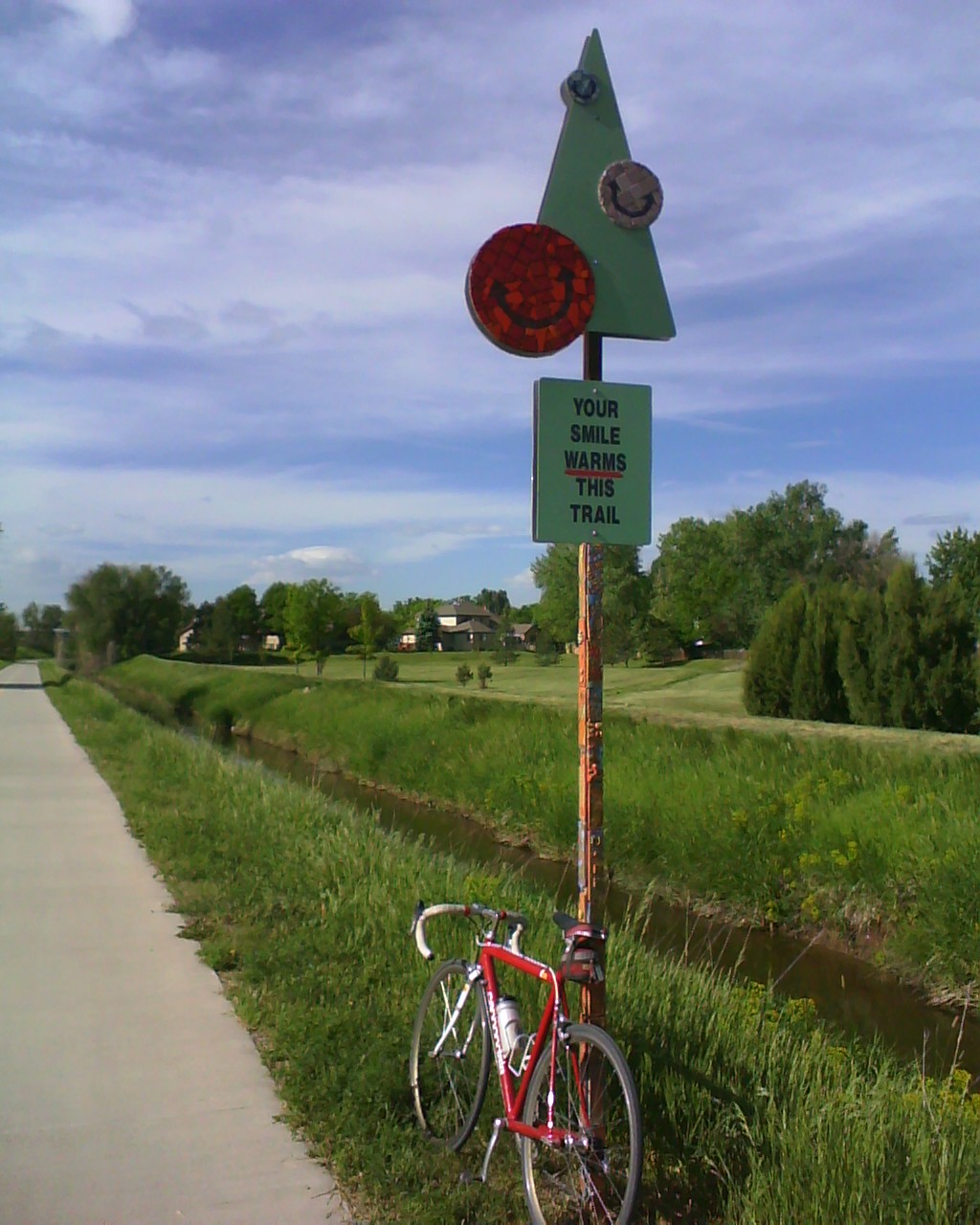 My friend Tori was out of town for a week and needed me to take care of her cats daily, so naturally I looked at this as a training opportunity. We live on opposite ends of Fort Collins, meaning that a trip to her place and back is a good 29 miles—a good distance for cycling or ultra-running practice. The key, then, was to find a good route because the most-direct car route on Shields St.—while doable on foot or two skinny tires—isn’t exactly the most pleasant with cars whizzing by all the time.

An inspection of Google Maps turned up an alternative, including several roads with wide bike lanes and even a few recreational trails. The highlight of these was the Mason Trail. I had last ridden this three years ago when writing it up for a now defunct local publication, so I looked forward to revisiting it.

Apparently, since this recreation trail’s initiation the city of Fort Collins had erected several signs along its four miles of pavement. But instead of being the expected, mundane warnings against excessive speed, littering or not stopping, they are of an artsy, smile-inducing variety—even inspiring. At least that seems to be the city’s intention. Messages like, “U can do it,” “Your smile warms this trail,” and “Getting strong.” The south end of the trail is even lined with wooden, human spectators who appear to be cheering for you as if you were racing over the cobblestones of Paris-Roubaix.

Another difference is the northern terminus is a little farther than where it used to be in 2007. It now goes all the way to Prospect Rd. You can carry on along a dirt/gravel path along the railroad tracks over to more pavement through Colorado State University, but I would only recommend this if you were either on foot or a mountain bike especially because there are many sharp thumbtack-like goatheads in this area.

The Mason Trail also seems less traveled than the Poudre Trail or the Spring Creek Trail (which connects to it). For this reason—in addition to its openness and relative straightness—it is a bit faster to ride on. The main impediments are major street crossings every mile, where the crosswalk signals can take a while to show the “it’s ok to go” pedestrian symbol. But this is no different from riding on an actual road.

In sum, the Mason Trail continues to be an excellent way to run, walk or bike from uptown Fort Collins to the southern end in peace and away from cars.

Glad you enjoyed a trip to the south end of town -- north-enders are always welcome to the 80528!

Not sure if you were aware, but a new 1.5 mile section of concrete for the Power Trail runs from Trilby to 0.5 miles south of Harmony. Therefore, it's easy to keep going SE from the Mason terminus, through Fossil Creek park, under the Lemay underpass, continue SE through a private subdivision trail, and then just a very short bridge section East on Trilby brings you to the new southern terminus of the Power Trail (got all that? =) )

The Power Trail going north, then, has a pleasant half-mile of unpaved/uncompleted dirt singletrack on either side of Harmony, but is easy to navigate.

I was not aware of that. How great about how all these trails are interconnected. Thanks for the tip, Mike! ↩Reply