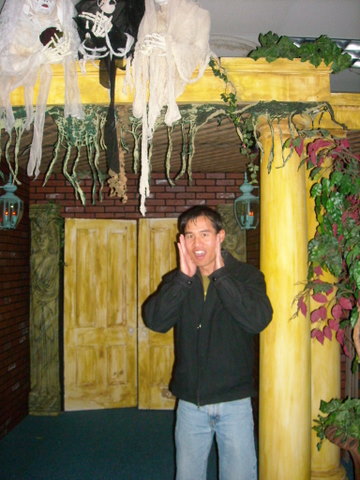 I’ve heard all sorts of excuses to get out of Friday night rock climbing this year. But Derek’s was one of the most unusual.

A monster? Why, that could actually be a good state of mind for doing one-arm pull-ups over gnarly overhangs and dyno-ing up to sketchy holds. But Derek didn’t mean he was going to be a Chris Sharma climbing machine. Instead, he was going to run around making indecipherable noises in a grotesque costume and try to make little kiddies pee in their pants.

Just kidding about the infant urination part. This wasn’t some rogue experiment he was conducting in some random area of Fort Collins to get parents all riled up or to test the effectiveness of local law enforcement. Instead, he was volunteering for an event called the Battle of the Haunted Houses at the local Foothill Mall. His job was to dress as a beast and frighten visitors willy-nilly.

He described how the night before, he and fellow monsters terrified a girl so badly that she ran out of the haunted house into the parking lot screaming. One of the monsters followed her and chased her among the parked cars, perhaps not only to the horror of the little girl, but motorists as well. I imagine after she found her mommy, she was still trembling in terror all the way back home.

Anyhow, in addition to being a scary monster, Derek was a very generous one as he gave Leah and I free comp tickets. So we visited the haunted houses on Halloween night, which seemed like the most appropriate night of the year to do so. It was the initial time I’ve been to a haunted house, and the first for Leah since she was a teenager.

The first haunted house we entered was named The Nightmare Experiment. Shortly after we went in, Leah kept grabbing onto my waist trainer, maybe to reassure me that she wasn’t yet eaten or kidnapped. Once in awhile I’d turn around, only to see some sort of gremlin stalking us from behind. Actually, this one was pretty friendly. Good thing, because he trailed us through every claustrophobic hall, room, nook and cranny in the maze.

Then there were other monsters who’d jump out at us, some of them muttering, “Leah… Leah…” We figured this must have been Derek’s house, unless the monsters were psychic.

Speaking of mind readers, the first room in the second haunted house—dubbed Destination Terror—featured some sort of fortune teller witch conducting a seance for us. She then opened a door to a labyrinth containing more leaping, screaming monsters (the type which always made Scooby Doo go run and hide and make everyone ask, “Scooby Doo, where are you?”)

In addition, Destination Terror contained some unorthodox props. The creepiest one was a Hearse that we had to crawl through while some sort of horrifying being was writhing on the back seat. For some reason, old American cars always make the spookiest scenes. Leah needed about 10 seconds to prevent her heart from jumping out of her chest before she took her first step into the Hearse.

Afterward, Leah and I headed over to a Mission Impossible-style laser room in which contestants had to contort and limbo his way through the laser beams (without touching them, as that would result in significant time penalties). The person who could do so the fastest was the winner. Leah would like to make it known to the whole world that she easily beat me here. I’m not sure if I’d count it as a bona fide chicking, however, because women (who typically have greater flexibility and smaller surface area) would be expected to do better than men here.

All in all, the Battle of the Haunted Houses was a scream. And don’t worry, we did not wet our pants.

Good stuff..... Thank you from all the Creeps at Scream Theme Studios Battle Of The Haunted Houses Fort Collins CO. ↩Reply