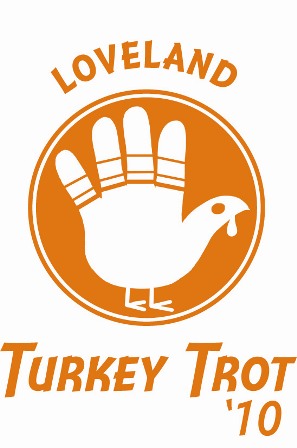 Because I had only run as many times this month as some of my friends run in a single day, I figured I’d spend more time this Thanksgiving eating turkey than running around like one. Besides, the weather guessers had forecast temperatures below Justin Bieber’s age for the morning, and when the air is that cold my speed typically approximates a little girl’s, just like Bieber’s voice does.

But Leah wanted to do a holiday run for charity and registration fees for the Loveland Turkey Trot benefited the Stepping Stones Adult Day Care Program at McKee Medical Center. Would I be interested in running? Okay, I said. If I was going to get a an ego-bruising, might as well do it for a worthy cause.

Thankfully, runners were allowed to huddle inside the McKee Medical Center before the start of the race, preventing our digits from becoming like a frozen bird’s. We only exited the heated building 10 minutes before the race, after which we encountered Raquel. Hooray, she made it out! We lined up in a mass of 1,000 people, and after a couple of near false starts caused by someone popping a balloon, the runners were off.

I quickly settled into about 30th place and concentrated on maintaining my position without pumping the lungs like an accordian too soon. After the first mile a teenage girl passed me with a similar-aged guy running elbow-to-elbow with her. I decided this was a good pair to pace off of but after another half-mile, the guy could not hold pace and I passed him. The girl got as much as a 20 foot lead over me but I kept the tempo fairly steady.

Then, with a mile to go, the girl pulled off to the side onto some grass and just completely stopped. What happened here, I don’t know, but at least that was one less youngster I was going to be chicked by.

Compared to some others around me I felt like I was surging at times, but my Garmin data shows the opposite: my mile pace was slowly increasing to about 6:51/mile. Bleh. But at least I had some fight at me at the end of the race, finishing with a solid sprint that got me past at least one dude.

Final time: 20:40. Bleh again. That put me two out of the age group awards, but no big deal: by now I am used to not winning any pumpkin pie on Thanksgiving Day.

The course actually proved to be about a tenth of a mile too long, so my performance actually was a little better for a 5k than the final time indicated. But I was thoroughly smoked by no less than three lassies. In fact, this was the third year in a row that a high-schooler (17 years old!) won the women’s race.

Hmmm, maybe running like a little girl when it’s frigid outside isn’t such a bad thing after all.