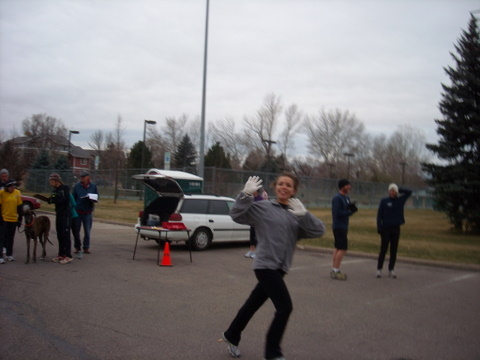 It’s amazing how a couple months of doing anything but running can make a formerly trivial distance seem like a week-long trek through Siberia. At least the weather today (unlike past years) was hardly like that of the Eurasian Steppe, with the car’s data pod reading a comparatively balmy 28 degrees by the start of the race.

It was because of the weather that I turned in my best-ever time for this particular race, which is pretty laughable because I felt anything but the best shape of my life and my running form felt as fluid as steel-cut oatmeal. The first couple miles I had good turnover but no stride length; after the turnaround I felt like I had no stride length, turnover, or functional lungs. I can’t even blame it on “cold air” because it really wasn’t that cold; I’m just out of shape.

Adding to the perception of slowness in this fastest-runners-start-last race were speedsters such as Slush, Alex, Nick P., and one guy who (for some odd reason) was given a start time three seconds before mine despite finishing in under 39 minutes. Slush (also for some odd reason, considering how fast he has gotten this year) started 15 seconds ahead of me and just kept getting farther and farther ahead especially after the turnaround; Alex caught me shortly after the halfway point; and Nick P. ran past and dropped me like he was being chased by hoodlum wearing a ski mask.

Ah, well. No complaints considering that it was my best time in six attempts here at Lee Martinez Park, even if the reason for that was primarily due to the weather. My current fitness level is an acceptable “base” for when I start training again.

Afterward the Fort Collins Running Club had its annual holiday party at Avogadro’s Number. At least food and friends is something I wouldn’t say “oh no” to.