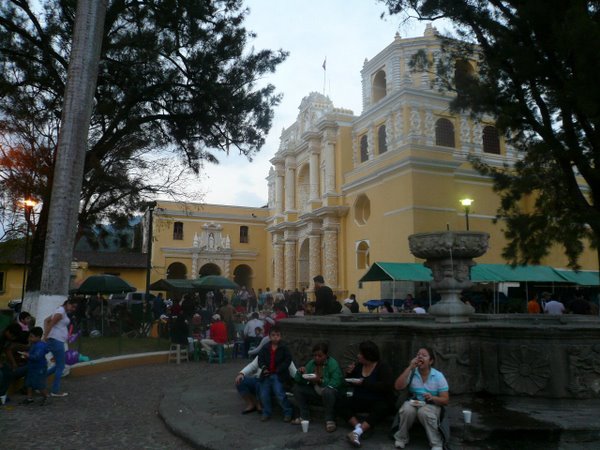 Report from Day 1 in Guatemala:

I made it to Guatemala so can give you some first-hand impressions now. I got to the airport on time and was through customs and out of the airport pretty quickly. However, it turned out that on x-mas day almost no shuttles (collectivos) were running that I was counting on (usually there are supposed to be many). So I ended up taking a taxi from the airport to Antigua by myself.

The taxi wasn’t a bad deal, though. Normally, it’s supposed to cost something like $35 for a taxi ride, but due to some negotiation before getting in the car (with the assistance of a travel dude outside the airport whom I paid a $1 “commission” to), it cost $20.

Considering how dangerous I read the country is, I was pleasantly surprised by what I saw and how I felt so far. I feel quite comfortable here. Guatemala City really looked no worse than any other big Central American city I’ve been to, and not a far cry from, say, Oakland, CA for that matter.

Antigua feels especially low-key and safe with less people than I expected. I went to an indoor ATM at Bank of America Central (BAC) by Central Park that had an armed guard pacing inside; no chance of getting robbed in here.

After I got some cash, I bought some yummy street food including crunchy tacos made with beets and bread filled with chicken. A street was closed off by Central Park where a bunch of fireworks went off (they are still going off)—however, they were fireworks not in the air, but on the street.

The kids here also have a thing for throwing “mini-grenades” (marble-sized things that spark and sound like a bb-gun when you throw them on the ground), including right in front of the airport.

I am leaving here tomorrow morning to San Andrés Itzapa (30 kilometers west of Antigua; I mistakingly wrote earlier it was 30 miles south), but could imagine coming back to Antigua for New Year’s. We’ll see. It’s a nice town.

Update 8:00 p.m., same day: Ok, the fireworks are definitely in the air! They are still going strong and their “bang” continues to reverberate against the walls of my hotel room. I did go outside to take a look, and they seem to be north of the city. I can sort of see them but buildings block their view most of the time.

Word has it that firecrackers are totally unregulated here.