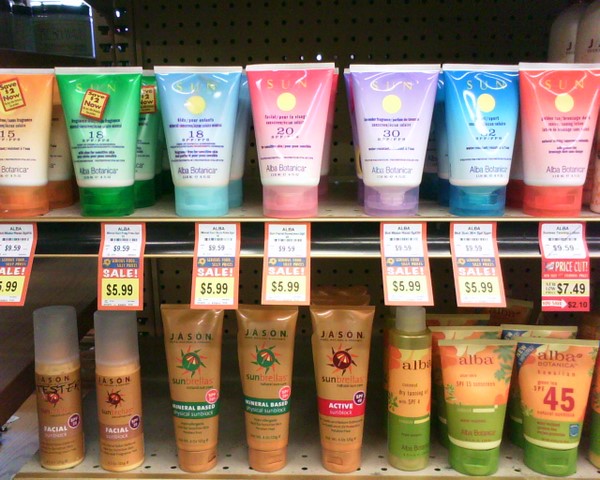 Many people—including myself—are willing invest significant amounts of time and money to purchase organic fruits and vegetables versus conventionally grown produce. While there is much debate as to whether the organic premium is “worth” it, at least the intent is to reduce our exposure to cancer-causing pesticides. The lifetime risk of getting a cancer is about one in three, so it makes sense to do what we can from getting this horrid disease in the first place.

What doesn’t make sense is that many of these same folks will willingly slather toxic chemicals from cosmetic products onto their skin, including common soaps, shampoos, lotions, and sunscreens. Dr. Joseph Mercola warns, “Putting chemicals on your skin or scalp may actually be worse than eating them.” After all, much of what you eat goes straight out of you at the toilet, whereas molecules absorbed through the skin can go directly into your bloodstream.

I learned there is an organization called the Environmental Working Group that maintains a database of nearly every cosmetic product sold in America and rates them for safety. It is found at CosmeticsDatabase.com and the ratings seem to be based off of credible, peer-reviewed scientific studies. The EWG’s safety rating scale is an easy-to-comprehend numbering system, with:

In other words, the lower the number, the less potentially toxic the item is.

Surprisingly, many of the items that I was using contained the words “natural” or “organic” but were pretty hazardous according to this database. Some examples included:

Once I “discovered” the Cosmetics Database earlier in the year, I phased out the above items or tossed them altogether. Then at my usual grocery store (the Sunflower Market in Fort Collins), I went around the store snapping photos of their cosmetic products with my cell phone camera. Finally, I assessed which of these were safest.

Ultimately, I settled on the following list. Note that these are not “the absolute safest products you can possibly buy,” but rather, what was “low hazard” and readily available to me without having to order online (which could easily double their cost due to shipping charges) or run around the entire town looking for products.

I’ve used all of them this year, and aside from the Aubrey Organics Swimmers Normalizing Shampoo, I’d recommend them. The swimmers’ shampoo doesn’t lather very well and most folks don’t swim frequently enough to warrant its “neutralizing” effects. I got it because I thought I’d swim in a chlorinated pool (that’s probably toxic, by the way) more than the four or times I have this year. I’d probably try something else with a good safety rating next.

For hand lotion, I was formerly using a homemade concoction of olive and coconut oil, but did not like its consistency (e.g., it was greasy and sometimes too hard or liquid depending on the temperature). So now I use lotion from Marin Natural Beauty that my friend Kimi developed and sells. Unfortunately, it is not rated by the EWG. However, she says that in all her products, “all the ingredients are edible in the form I use them.”

That’s kind of like my household cleaners. I have long used a 50/50 homemade mix of water and white vinegar for wiping surfaces and baking soda with a wet sponge for scrubbing. They are all very effective and are completely non-toxic.

Here are some guidelines you might consider when using cosmetic products:

Regarding the expense of the “safe” cosmetics, I wouldn’t worry about them too much. Yes, some of the items I listed above cost, say, $8 in contrast to their common $3 counterparts, but how much does one spend annually on cosmetics, really? I probably use only two bottles of shampoo per year, three tubes of toothpaste, one bottle of hair gel, etc., so spending 200% or even 300% more for these things is hardly going to break the bank.

Not to mention they cost way less than a year’s supply of organic fruits and vegetables.