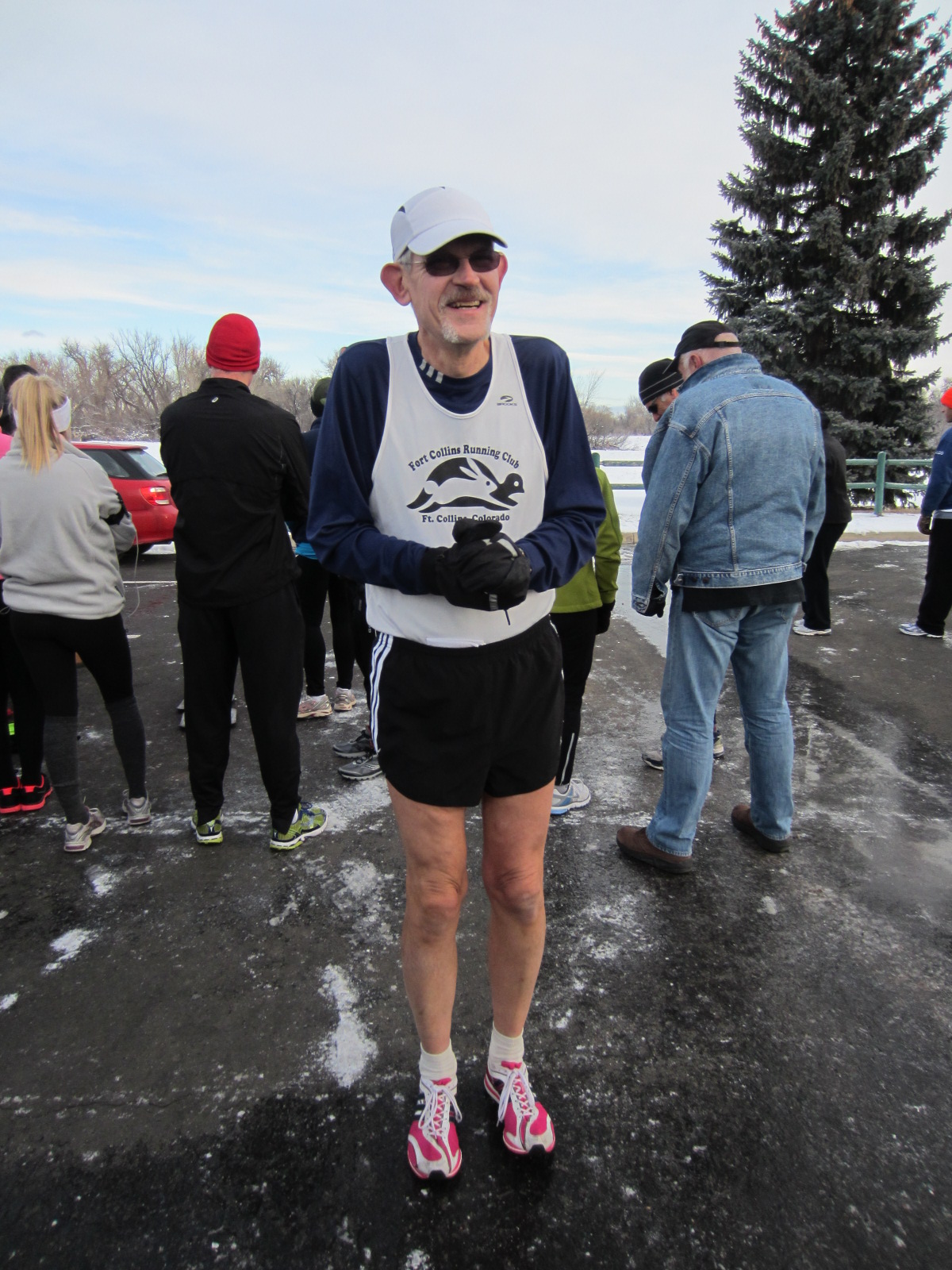 The anticipated race was cold and long enough that by the time I knocked on neighbor Tim’s door to pick him up, he had already decided “I can’t go.” No amount of pleading could get him to place a foot outside the door, which in turn did little to encourage Kelly—who was standing on my driveway—to head over to the race to run her longest distance ever. In fact, I believe she said more than once, “I’d rather take a nap instead.”

Fortunately, I did manage to cajole her to drive herself over to Lee Martinez Park, and by the time she got out of the car she seemed ready to run her butt off. She didn’t even seem fazed that most of the 37 others (actually, kind of a low turnout) were hopping up and down like bunnies, and even Tom Schipper was wearing a long-sleeved shirt. Or that even I—the guy who had earlier tried to assure her, “good news, it’s not that cold!”—ran back to the car in the minutes before race start to fetch an extra pair of gloves. It may have been 10 degrees warmer than this edition of the race in December 2006, but it definitely wasn’t balmy.

I had a special task today: to pace and sight for Fort Collins Running Club member Dan B., who is visually impaired. FCRC President Connie D. had asked me to run at 7:00-7:30/mile pace, which while a little slower than my A-game pace was enough to keep my effort honest. A side benefit was I got to start a little earlier in this staggered-start race, which allowed me to see, talk with, and pass other runners more than usual.

Ellen runs at about the same pace as Dan does, so the three of us ran the course usually no more than 50 feet apart. Our halfway split was 24 minutes flat, and we were able to pick up the pace on the return trip a little bit (22:54) for a nice negative split.

After getting Dan to the finish I ran back onto the course for Kelly. Last month she finished in a creditable third place, but today she was the last one remaining on the course. Her left knee started having a stabbing sensation after four miles. Still, she was smiling and I was proud of her when she crossed the finish line, successfully completing a distance over 50% farther than her erstwhile longest run. Without walking too.

Afterward, we all went to Fuzzy’s Tacos for a breakfast bar consisting of eggs, tacos, potatoes, and homemade breads. The restaurant put up signs welcoming us and the food was delicious despite it being self-serve buffet style. “Food tastes better after running six miles,” Kelly observed.

When we parted, she went home to take a nap. She wouldn’t admit it, but I bet she was very glad she decided to nap after the race instead of in lieu of the race after all.