When I purchased my 2001 Audi TT Quattro Roadster, the seller only had one key to provide me. Not having a backup key made me a bit apprehensive because if I, say, accidentally locked the key inside the trunk or—worse—lost it altogether, a locksmith could charge $500 and replacing the entire ignition lock for a new set of keys could cost upwards of $1000. Not to mention the great inconvenience of needing either service.

So I spent over an hour searching various Audi forums about how to duplicate the key and program the remote key fob. I encountered a lot of conflicting information and non-specific suggestions and speculation along with many uncomfortable price quotes. So this post is intended to clear up confusion for any other first-generation Audi TT owners out there by recounting exactly what I did in order to get a duplicate key and fob.

These were the specific steps I took:

I consider how much I paid for this backup key “not too bad” considering all the different prices folks were quoting on various help forums. E.g., $200 from from a locksmith and $230-350 from a dealer (which would require a wait since the dealer would have to order the key). And again, locking out or losing an only key would incur even greater costs for a rescue.

Consider the spare a form of insurance, then. I am keeping the backup key in a safe.

The following instructions were provided by Your Keyless Remote when I bought the key blank and remote transmitter from them.

Actually, I think Step 1 is unnecessary. This is because a few months ago—when I only had one key—I replaced the battery on the original remote key fob and the remote no longer worked. I successfully programmed it by doing steps 2-4.

The above is all I had to do to get my key and key fob working. If you are still having problems, see below.

According to helpful readers of this site, there are two scenarios where the above instructions may be insufficient: 1) if your car was a “2001.5” model year Audi TT or later and thus had an immobilizer chip in the key, and 2) if the above instructions don’t allow you to reprogram more than one key fob for some reason.

Apparently, some Audi TTs built for the 2001 model year and beyond (say, “2001.5+”) had an immobilizer chip embedded into the key. My understanding is that without this chip, the key is basically just a valet key, where the car would run in a crippled state. OR it may not allow you to turn on the car at all. I’m not sure which is the case, as my particular 2001 Audi TT Quattro Roadster does not have one.

However, if it turns out your TT does have an immobilizer chip, you can do the following:

For anyone that runs into this problem of having to also program the immobilizer chip located in the key half of the remote: you should be able to find a locksmith that can also program that for you. If you call the Your Keyless Remote at 815-675-0404 they can locate a locksmith for you near to you. I’d recommend to get a quote from locksmith for how much cutting the key alone is, how much for the chip programming, and how much for both. Have him cut the key first and try it real quick (turning on your car). If it turns on you’re good to go, if not run back in there and have him program the immobilizer chip.

Apparently it sounds like (from what I’ve been reading) Audi TTs made in 2001.5 forward have the immobilizer chip and earlier 2001 cars don’t. That may be why Felix’s remote doesn’t have one.

Thanks to Luis who shared this valuable information in the comments.

Programming More than One Key Fob

Steps to reprogram keys to a car they are already linked to:
1. Press and hold the unlock key on a remote
2. Insert key in ignition and turn to on (while still holding unlock)
3. Hold unlock while in the on position for 2 seconds
4. Turn key to off, remove from ignition and release button.

Do this for each remote. Relink to seat positions (press and hold mem position #, then unlock button for 2 seconds and release both) and done.

To program new remotes on a car never linked to previously:

1. Take a key (valet key works best, put it into the ignition and turn the key to the “on” position, so the dashboard lights come on.
2. Roll down the driver’s side window (not required, but a good idea in case there’s a problem).
3. Exit the car and close the door.
4. With a second key, physically lock the doors by turning the key clockwise (don’t use a remote).
5. Take the first remote to be programmed, press the unlock button. The lights will flash once.
6. Wait 10 seconds and press the unlock button. The doors should unlock. That first transmitter is now programmed.

7. Lock the door again (physically) with the key, (not the remote) by turning clockwise.
8. Press the unlock button two times with a one second interval in between, the lights will flash with each button press for a total of two flashes.
9. Wait 10 seconds and press the unlock button. The doors should unlock. The second transmitter is now programmed.

10. Lock the door again (physically) with the key, (not the remote) by turning clockwise.
11. Press the unlock button three times with a one second interval in between, the lights will flash with each button press for a total of three flashes.
12. Wait 10 seconds and press the unlock button. The doors should unlock. The third transmitter is now programmed.

13. Lock the door again (physically) with the key, (not the remote) by turning clockwise.
14. Press the unlock button four times with a one second interval in between, the lights will flash with each button press for a total of four flashes.
15. Wait 10 seconds and press the unlock button. The doors should unlock. The fourth transmitter is now programmed.

16. Remove the key from the ignition.

Make sure that to test the newly program remotes, the original key is removed from the ignition since this exits the programming process. Someone might be a bit frustrated trying to test it with it still in ‘program’ mode.

At least one Audi TT owner has had some difficulty accessing the programming mode. If it doesnt work then take the key out of the ignition and start over. Rinse, lather, repeat. It will go eventually.

If you are still having problems after trying it more times than you can count, check the key is right one for year of car or that the key and battery are good.

Thanks to Jeff who shared this valuable information in the comments. 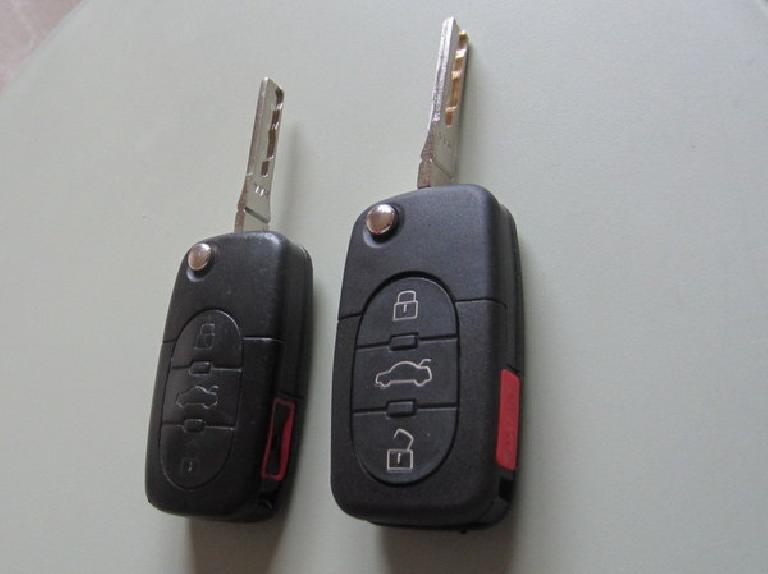