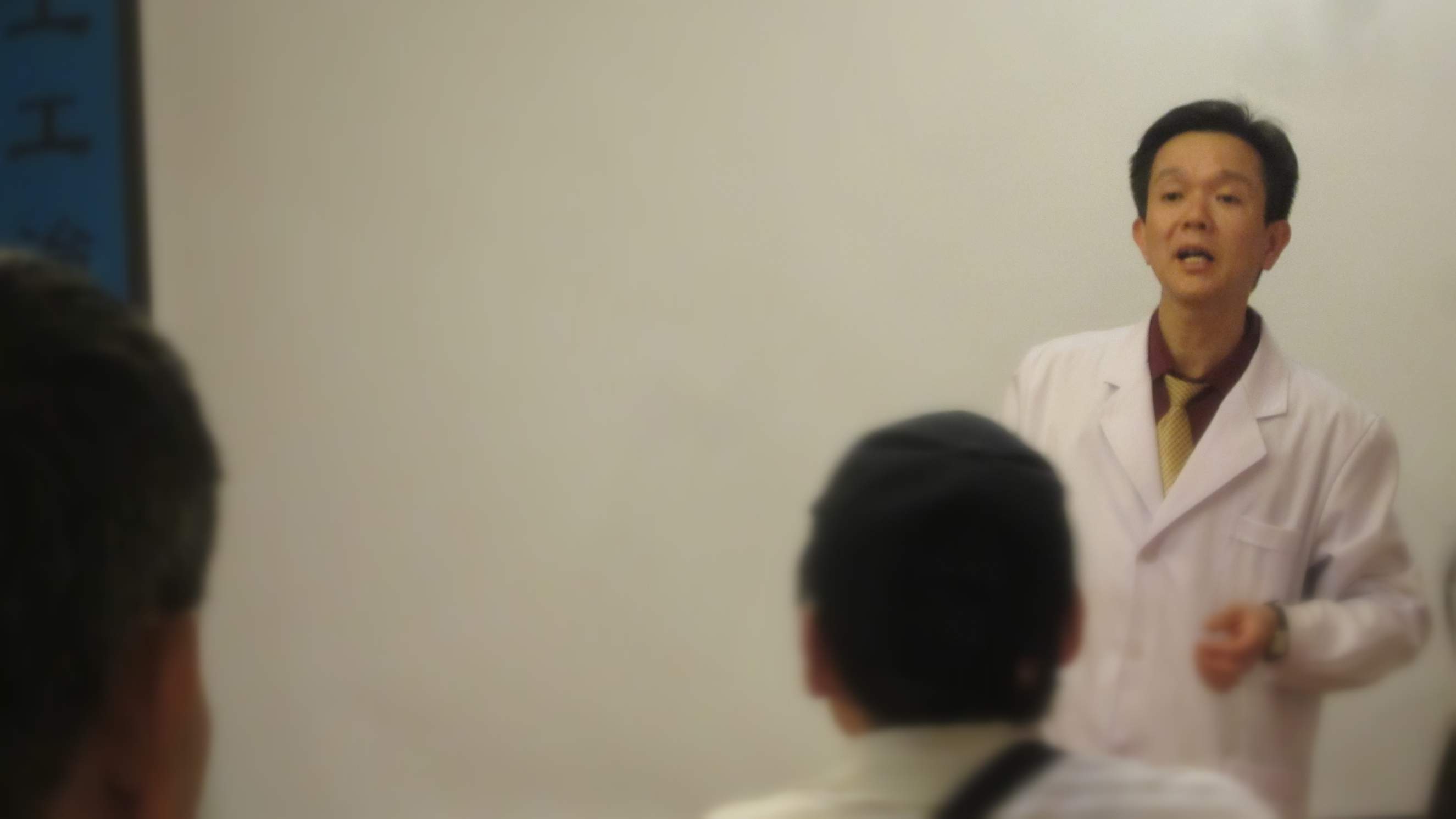 I had just awoken from a brief nap during a two-hour charter bus ride from Hangzhou before our tour group was corralled into a nondescript building sporting dozens of empty cubicles in Shanghai. We were lead into a little conference room with folding chairs arranged in rows as if for a wedding, but this little gathering would be a little less festive. That was obvious when the man, above, walked in wearing a serious-looking white overcoat with a gold tie and maroon shirt peeking out from it. He closed the doors behind him, as if what he was about to tell us was too important to be disturbed.

What did he tell us during his ensuing 30-minute presentation? Something truly remarkable: that our palms are not only the windows to our souls, but a most accurate prognosticator of our health.

My dad helped translate his presentation to me. “If you have red spots here,” he said, pointing to a region on his hand roughly below his index finger, “you have heart trouble.”

My hands lacked any red spots, so I let out a sigh of relief that my body was fine today. Or was it? When the doors of the conference room was finally opened, we were given the opportunity to have a free consultation with one of the dozens of People Wearing White Overcoats on hand to diagnose whatever problems we had Before It Is Too Late. Ah, now I knew what the cubicles were for as my mom, dad and I were shepherded into one of them.

Our Person Wearing a White Overcoat was a lady who looked smart enough. She must have been, as she was able to give very detailed diagnoses by looking at our palms for five seconds and holding them for another ten. Western medical devices containing a bazillion hertz worth of processing speed cannot yet do such a thing.

My dad was first. I couldn’t understand a thing the lady was saying, but my dad translated for me after the consultation when we were back on the bus. I was especially interested in hearing what he thought of her diagnosis, since he is a medical doctor with a bona fide M.D.

“She said I had three things,” he said. “First, she said I had high blood pressure. That is true. Second, she said I have hardened arteries. I thought that was perfectly reasonable, since most old people do.

“But she lost me when she said my pulse was too high. I had a stress test a few months ago, and the problem is my pulse is actually too low!” He then proceeded to count pulse: 60 beats per minute. Definitely not too high. Well, two out of three isn’t too bad.

Next up was my mom. She had nothing wrong with her, she was told, except that she doesn’t sleep well at night—something that is absolutely true. However, she could be rid of that problem if she were to “buy the most expensive drug.”

Finally was my turn. Now, a few months ago at my annual physical, my doctor told me that I was one of the “most medically boring” people he had ever met since there was nothing wrong with me, but it turns out my doctor must have overlooked a few things. Or perhaps he didn’t take (or worse, flunked) a palm-reading class. Because there actually are quite a few things wrong with me.

My dad translated on the spot as the Lady in the White Overcoat speaked. “You have a kidney problem,” she said.

That was definitely news to me. Fortunately, I have two kidneys if one of them fails. Unfortunately, that wasn’t my only issue.

“You have some nervous issues. Your job is really stressing you out.” It was?

“Your hands are very cold,” she continued. Well, the air conditioning was on…

The worst part was yet to come, though. “He gets excited very easily,” the lady said, now addressing my parents, “followed by great depression. It is really important that he see a psychiatrist. He must see one as soon as possible!”

I looked at my mom, who was positively grinning, and I struggled to keep a straight face myself. In fact, I must have laughed out loud because at some point my dad reprimanded me, saying, “Don’t laugh. This is serious!”

Which just made me laugh even more. I’m not sure why. Maybe a psychiatrist could tell me.

Unfortunately, our tour group had to leave before a Chinese doctor could advise me on what to do about my kidney problem. I wonder if it could be remedied with “the most expensive drug.” Here’s hoping.