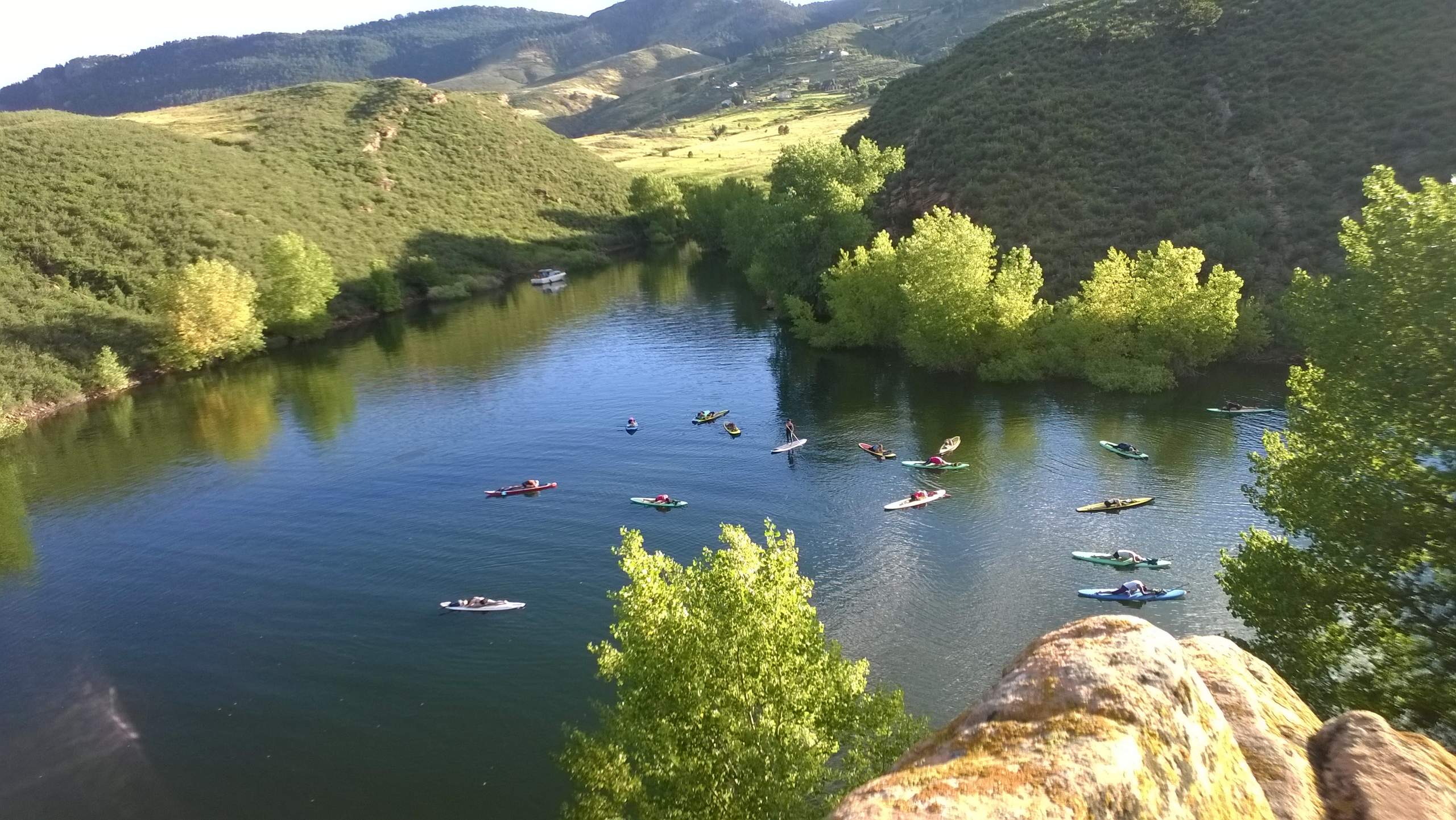 Maureen had signed up with Old Town Yoga to do paddleboard yoga at Horsetooth Reservoir in Fort Collins, and while Venus (who was visiting us from Oklahoma) and I would have liked to join her, she got the last available spot. No problem—instead, this gave me an opportunity to hike along the northwest shore of the water, watch the yogis on their colorful boards, and take photos. It was a sunny, yet temperature-perfect evening for it.

The yoga enthusiasts started near the boat ramp of Satanka Cove and paddled approximately half a mile over to a secluded inlet further southwest. I followed them by hiking along a narrow makeshift footpath that rose upwards to what turned out to be a perfect vantage point.

When the yogis reached the inlet and commenced their poses, three college-aged co-eds wearing swimsuits emerged from the water and climbed up to a vantage point about ten feet from where I was sitting. Apparently, they had swum to this point. When they settled down upon the rock, the male among them gasped, “Wow… this is so beautiful.” That was exactly what I thought too when I got here.

An instructor led the session for about an hour before giving the yogis 10 minutes of “fun time.” Maureen did a series of warrior, cat, cow, and crow poses before attempting to do dancer pose, which resulted in a loud splash as she hit the water. The others cheered, “Good job!” Another person fell into the water soon after, before the group commenced paddling back to the initial rendezvous point.

The three swimmers then scampered back into the water, but only after one of them mentioned something about going through “Colorado withdrawal” in a few weeks. This was the time to take advantage of outdoor opportunities before the summer was over, and Satanka Cove was definitely a good spot to do so.

See this post written by Juliette Rule about the same yoga session.

For this outing, I exclusively used my Nokia Lumia 820 Windows Phone instead of the Canon ELPH Powershot 110 I normally shoot with. All images—except Image 8 & 9 (the square ones) which were taken by Old Town Yoga—were taken using this phone, mostly with the Lumia Camera app and minimal or no post-processing. Not bad for a two-year-old cell phone, yes? I expect the photo quality of the current crop of smartphones to be even better.

I think it’s time to declare standalone point-and-shoot cameras obsolete—and maybe even digital SLRs for all but professionals and the most avid amateur photographers.

Hi Felix! These photos are awesome. I'm actually the SUP yoga teacher that teaches these classes :) Would you be able to email me some of your photos? I'll credit you of course. I'd love to post these on my website and FB. Thanks so much! ↩ Reply

Hi Ange. Great job teaching the yoga class. Sure, I'll share my Onedrive folder with you containing all photos from that yoga session. Feel free to use as you wish. Cheers! ↩ Reply