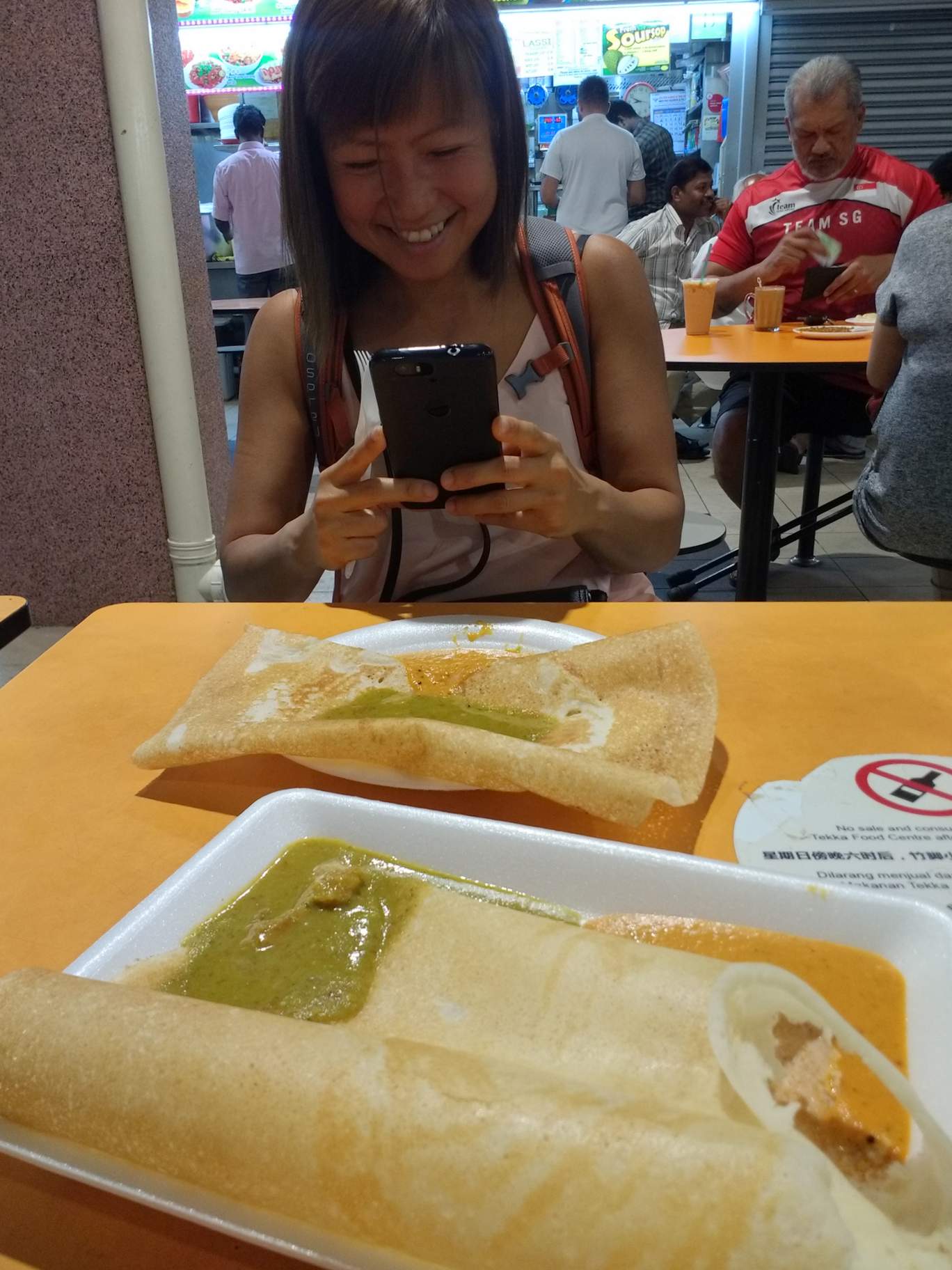 It was the middle of the day, so E and I had walked over to Singapore’s Chinatown Market looking for lunch. Angie had suggested trying out quite a few dishes here (fish head curry, claypot chicken rice, and fried Hokkien mein for starters), and my appetite was already whetted from spending several hours on our feet. Finding those entrées turned out to be more difficult than I imaged, however, because in this “market” were hundreds of tiny food stalls—most of which were selling different things.

Fortunately, the cheap Singapore SIM card I had bought on eBay well in advance was working, so I was able to send Angie messages by WhatsApp, who was able to assist us in our treasure hunt.

“Try stall number #02-126!” she advised. That one turned out to be closed. She suggested another one, and then another. Finally, E and I settled on Stall 103. E decided he would try the “black carrot cake,” and I was going to try the fried Hokkien mein.

I went over to the stall and announced our orders to the cook. At first I wasn’t sure if the man heard or understood me, because he never made any eye contact nor even looked at my face, and also remained mute. He simply went over to his woks and started throwing food in there. Was he preparing our order? Or someone else’s?

E and I waited about 10 minutes until a woman—maybe a manager, or maybe the owner—appeared. The cook then put two cheap-looking plastic plates with food on a ledge in front of the stall. One had noodles, and the other had what looked like a light-colored fried egg or vegetable dish.

“Is that our order?” I asked the woman. I couldn’t tell, as I did not know what Hokkien mein and black carrot cake looked like, although both E and I highly suspected that the latter was not some sort of sweet dessert.

“What did you order?” she asked. I told her “fried Hokkien mein and black carrot cake.”

“Did you pay?” the woman curtly responded. I answered affirmatively.

She then quickly consulted with the cook, who told must have confirmed that this was our order, except that he had made white carrot cake and not black carrot cake.

The woman then told me as such, adding at the end, “You have to STAY ALERT.”

As E and I retreated back to a table with the food, E said to me, “Wow—that lady really made it seem like it was your fault.” I laughed.

Perhaps neither the service nor the presentation was not going to win any Michelin stars, but at least the food was delicious and cheap. E and I took our time to enjoy the food, and was almost done when we heard more yelling.

“Don’t look,” I warned, “but it’s that woman again.” This time she was at a different stall, either barking orders at the employee over there or chastising another patron.

Later during our trip in Singapore, we enjoyed yet more Singaporean, Indonesian, Malaysian, and Indian food—just in places with slightly better ambience. Happily, we had a lot of these dishes with Angie herself, as she graciously came out to hang out with E and I a couple evenings to show us around the city she had once lived in and still has family at.

Below are photos of some of the food we had. I think the food (and food experiences) is what I will miss most about Singapore among all the many other positive attributes this city-state has.