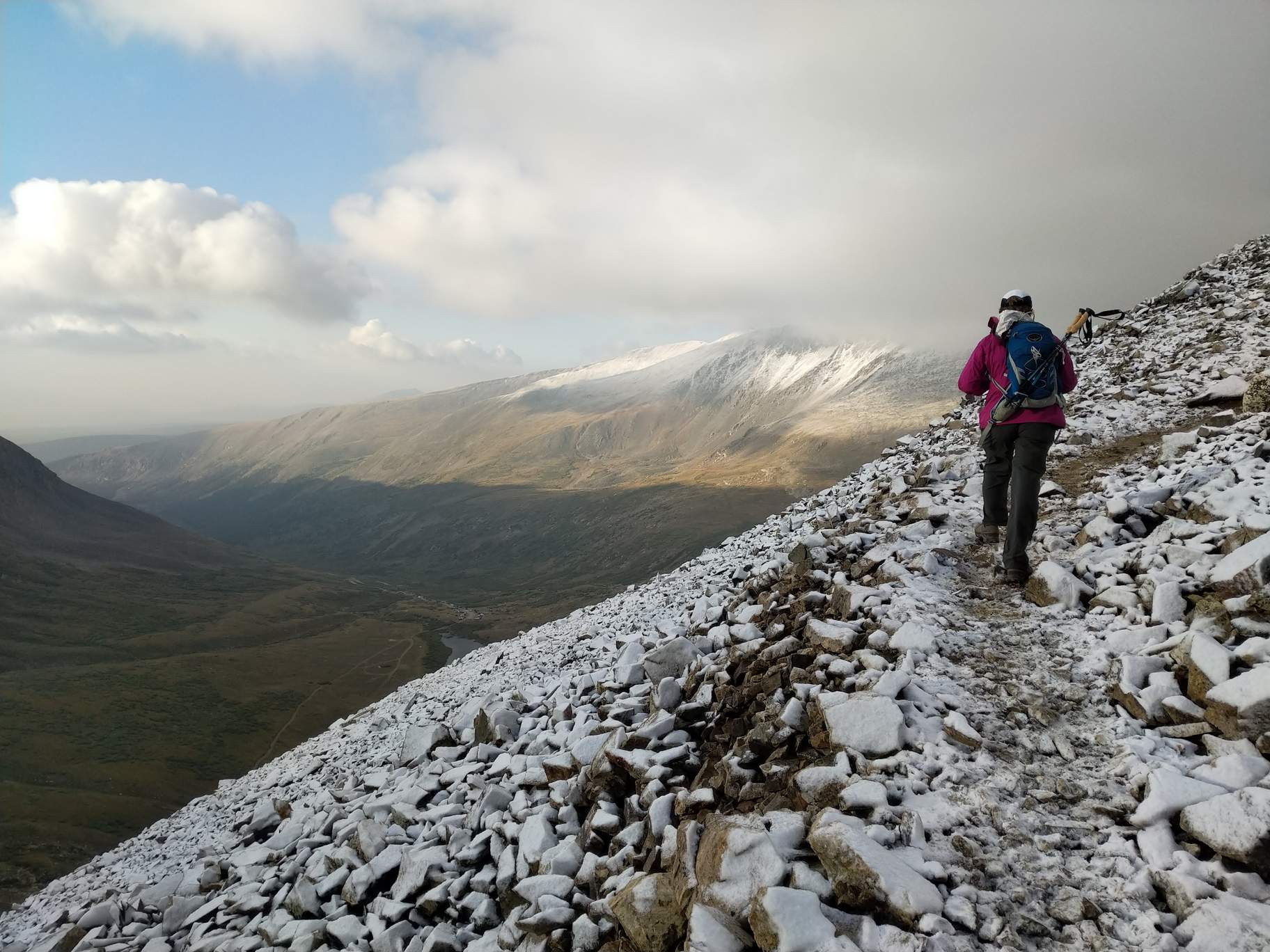 A bunch of us from the Fort Collins Running Club were having a going away party for our friends Colin and Serena when Mel made an interesting proposition.

Sure, why not? I thought. It’s not like I haven’t done impromptu mini-adventures like spur-of-the-moment 50-mile runs this year already.

In any case, I decided having to wake up at an ungodly hour—like 2:15 a.m., or an hour before the rendezvous time—was not sufficient excuse to turn down this excursion. After all, how many chances does one get to bag four peaks taller than 14,000 feet in a single day?

The mountains were Democrat, Cameron, Lincoln, and Bross. Turns out that Bross is on private land and Big Brother (the government) would rather not have anyone try to hike up to it. But that still left three.

Mel drove us to the trailhead, which was somewhat rugged the last 1000 feet but not much of a problem for her Mazda CX-5. The road was already littered with parked cars and there was a long line to an outhouse. We started hiking at 6:20 a.m.

None of the trail was super technical and only a few parts required some scrambling. Closer to the top of Mt. Democrat—the first summit we bagged—there was a light dusting of snow on the footpath. When we reached the top it was very windy and quite cold, and it amazed me that several people were hiking in shorts. Sure, it was over 90 degrees yesterday in Fort Collins, but up here? It was closer to 40F!

It was shiver-inducing enough that we decided took a moment to ponder whether we wanted to carry on to the next peaks. “My wife and I,” Wolfgang explained, “have a system where we’ll say how much we want to do something on a scale of 1-10.” So we took a quick tally of everyone’s feelings. Two of us (Wolfgang and I), were feeling indifference, like a 4.5. Mel and Marc, on the other hand, were more like 6-7, meaning they wanted to give the next peak a go. So we carried on.

I was wearing a long-sleeve tech shirt, rain jacket, beanie cap, and fleece gloves, but what I very much regretted not bringing was a fleece hat with integrated facemask. As we made our way up to the top of Mt. Cameron—first on a knife-edge traverse, then along a pretty exposed cliff face where the wind were nearly strong enough to toss us off the mountain—my face was about to freeze off. So I was hiking a good ways along this part with gloves covering the face, breathing pretty hard.

The wind continued to pick up and visibility was poor. At least some other hikers who were coming down told us how much further the summit was, although their answer was a little demoralizing. “About 20 minutes,” they said. Too long to think “almost there,” but short enough to continue going.

We were fortunate to encounter other hikers when we reached the top because otherwise we might have continued walking too far. The peak was on level ground, and with the lack of visibility beyond 50 feet, we missed the summit marker.

Up here in our frozen states, we did not even have to take an official vote of whether we were going to continue on to Lincoln or not. If we did, I was a 2 or maybe even a 1 on the 1-10 scale.

We hurriedly scampered down and at least when we got back to the knife-edge traverse, the wind had mellowed down a bit. From down here, we could see that Lincoln and Bross were still engulfed in inclement weather.

The whole experience reminded me of the mixed feelings I often had when hiking fourteeners. I loved the views and being out in pristine country, but never really cared for the dark-o’clock starts, the thin air, the cold, the wind, and sometimes treacherous footing. It’s why hiking all 53 fourteeners in Colorado has never been on my bucket list, even though Democrat and Cameron are now my 7th and 8th.

The nice thing about retreating down was we got back to Fort Collins with a whole afternoon to spare to do whatever else we wanted. Like take a nap.

Beautiful pix, thanks for sharing Felix. I summiteers the Grand Teton in 2015, as well as the Middle and South Tetons. Loved it. Some parts of the Grand were pretty dangerous though. -Carsten ↩ Reply

The Tetons looked stunning from afar. So great you got to climb them for a closer look! ↩ Reply