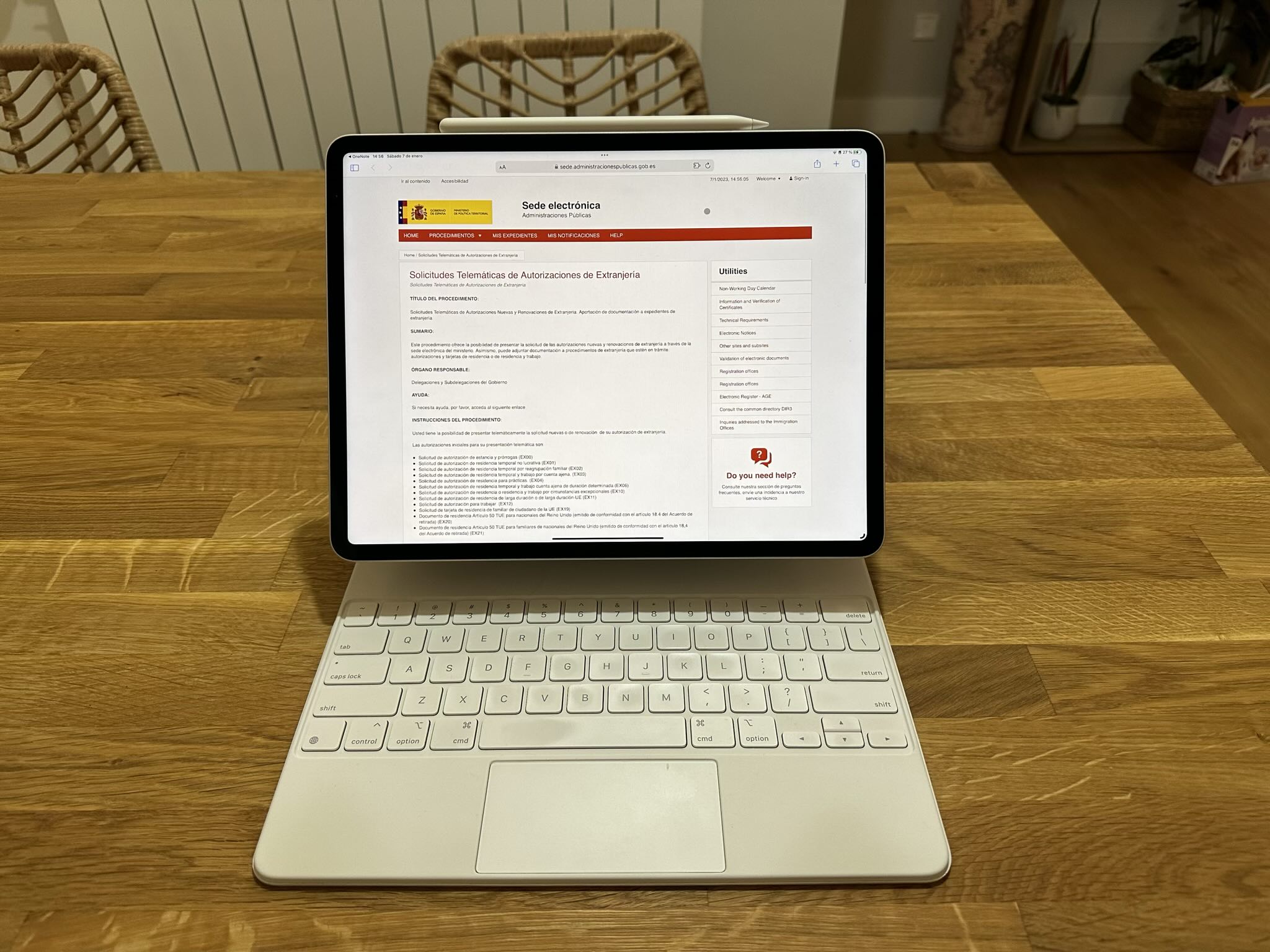 After the Los Angeles Consulate approved my first non-lucrative visa (NLV) application for Spain, I was relieved to discover an electronic option for renewals. I would not have to print out an inch-thick worth of paper again. I could simply renew the visa online when I needed to do so eleven months later.

If only it were simple.

First, there was the matter of getting a digital certificate. The certificate needs to be installed on the computer that you do online transactions with Spain. It assures Spain that you are who you say you are and not some hacker.

To get the certificate, I followed instructions from SpainBuddy.com. It involved:

I completed the above in August. But that was merely a pre-requisite for doing the NLV renewal application online..

In December, I started the renewal process for my NLV. Much like for the initial NLV, I obtained bank statements and translations. But this time I didn’t have to get a background check or medical clearance. In addition, I paid the tasa (fee) at my local Spanish bank (Santander).

In theory, then all I had to do afterward was digitize (scan to PDF) the documents and submit them online. I could only find one webpage in which an ex-pat successfully did the latter, but it was enough to encourage me that it could be done.

That webpage was entitled “How to Renew the Non-Lucrative Visa Online.” It was written by TapasForever.com in 2019 and is thorough enough that I will not repeat its contents here. Instead, this article is about all the pitfalls I encountered when trying to renew my NLV online in January 2023.

Ultimately, I spent seven hours on a Saturday afternoon before successfully submitting all the documents. At the time it seemed like a loss of a perfectly good weekend. But I received approval (“resolución favorable“) for my renewal application on Tuesday, only three days later! Then it seemed worth the trouble.

Below are all the hurdles I encountered when trying to renew my NLV online, and how I solved them.

It took some web searching, but I found the new website for visa renewals.

As an aside, I’ve encountered several instances of Spain creating new web pages and getting rid of old ones. It’s bewildering why they don’t add redirect links from the old to the new. They are easy for any web developer to implement and would help the general public immensely.

2. Submittal was not possible using iPadOS (or iOS).

I was able to install the digital certificate in Safari on my iPad Pro–my only computing device, unless you count my smartphone. But midway through filling out the renewal online, I realized I would not be able to complete the process using Safari for iOS because the Spanish government’s AutoFirma software was not available for it.

AutoFirma is required to collate each uploaded document with your digital certificate at the very end of the process. The software is only available for PC, Mac, or Linux and not iOS/iPadOS or Android.

My solution was to Remote Desktop into a Windows virtual machine like I did to get the digital certificate. How to create a remote Windows VM is far beyond the scope of this article.

What you can do instead, of course, is borrow a PC or Mac from a family member or friend if you only have a phone or tablet.

3. The Spanish website was not compatible with Microsoft Edge.

Partway through the process using Microsoft Edge on a Windows machine, the Spanish website was not responding. At first, I could not figure out why.

It was only until I remembered reading somewhere that the website was not compatible with later versions of Chrome. Chrome and Edge are both based on Chromium, so the software must not have been compatible with Edge either.

The solution was to download and use Mozilla Firefox instead.

4. The website warned that I already had an expediente.

After I had filled out a few forms, the website warned that there was already an expediente (record) for a renewal application, and that I should use that instead. I think the Spanish government automatically creates an expediente for you sixty days before the expiration date of your NLV.

To avoid wasting time filling out a form and then getting that error, I suggest going to this page at the very beginning to see if a número de expediente already exists for you.

On that page, fill out only the required fields. They are designated with an asterisk (*).

That will hopefully yield an existing número de expedienté for you. Now proceed with filling out the renewal forms.

5. The Spanish website would only accept PDF uploads of 6 MB or less.

One of my PDFs was a scan of all 30 pages of my passport. Initially, it was 18 MB. It took about an hour of work to reduce it to six megabytes. My method was to photograph every two pages, reduce the resolution of each image to 1200px (for the longest size), and import/collate them in Microsoft Office Lens. I then saved the collated images as a single PDF under 6 MB.

What probably would have been easier, and just as acceptable, was to scan only a third of the passport pages at a time. Then save each third as a PDF file. You would have three PDFs to make up the entire passport.

The official website for downloading critical AutoFirma software, only available from the Spanish government, was down. I futily scoured the internet for an alternate source for at least half an hour.

Gauging from two complaints about it on Twitter (an American social network that I searched), it was unavailable for at least the last few days. This was a terminal issue if I could not acquire the software.

Fortunately, a Spaniard on Twitter who had the same problem tipped me off to another software source. Ironically, it was available from Galicia, the region I live in: alternate AutoFirma download page.

After I had successfully installed the AutoFirma software and uploaded my documents, all I had to do was submit everything. But AutoFirma then started throwing a fit.

It said said it could not find my digital certificate (an encryption key I applied for in person in August for things like this):

This was the final problem I had before successfully submitting the renewal application online.

After resolving Pitfall #7, I arrived at the following page and was ready to celebrate:

But then the Spanish website reared its ugly head again. When I tried to download the justificante (receipt) or copia de su solicitud (copy of your appplication), it showed the following error page:

This was frustrating, but I had already reached the page that said my application was accepted. I crossed my fingers that was true and that I would not need the justificante.

On Monday afternoon–or only two days after I had submitted the NLV renewal application online–I received an email saying that my application was received. I was glad to receive that, because I kept trying to check the status of my solicitud online using the número de expediente that I knew was correct, and the website kept saying it couldn’t find a record. (You can also try to check the status at this link which doesn’t require a número de expediente. It only needs the application date, your NIE, and birth year.)

The next day, I received an email saying that my application was approved (“resolución favorable“) and that I should apply for another TIE within one month.

I was shocked to receive that message since I expected to gain approval within four to seven weeks, not three days!

I have a theory that my application was approved so quickly due to there being no others to review. I suspect very few people submitted online applications during the week I did since the AutoFirma download page was down.

Whatever the case, I was delighted. All I had to do was apply for another TIE, a procedure I was already familiar with from a year ago.

Of course, Spain had to throw me for another loop when applying for the TIE. Apparently, after December 2022, it was no longer possible to apply for the tarjeta in the town of Pontevedra. I had to go to Vigo instead. That was inconvenient since it required hopping on a train to go to a different city, but whatever.

I hope you do not encounter the same pitfalls I did, or at least know how to quickly resolve them now. Good luck!

About the Processing Times

Other ex-pats on the Spanish NLV Facebook Group have reported their electronic NLV renewals took five weeks to five months. So my three-day turnaround is atypical.

I suspect it’s because of the region I reside. I live in Pontevedra, and the Oficina de Extranjería de Pontevedra provided the resolución favorable for my renewal. I guess there are fewer ex-pats here, even though I have already met two American ex-pat couples in Pontevedra during the last few months.

This question was outside of the original scope of this article. But since a couple of people have asked me, I am answering it here.

I provided proof of funds from a Spanish bank and a U.S. investment brokerage. To be clear, I think that proof of funds from any source in any country is acceptable, provided that they are liquid (“available at a moment’s notice”). They also need to be enough to convince the Spanish government that you have enough to live on without working for the length of the visa renewal (2 years). The safest thing to do is show that you already have 2 years * 4X IPREM.

I went to a Santander Bank branch, where I have a Spanish account. I had their teller print out and stamp a statement with my account balances from the last three months. That was super easy, and since it was already in Spanish, there was nothing else to do but scan it.

I also provided three months of account statements for my Schwab investment brokerage account in the U.S. so that there would be no question I had sufficient funds. (My Santander account only had about one year’s worth of 4X IPREM, not two years’ worth.) But instead of translating those into Spanish, I had Schwab write a one-page, notarized letter that listed my account balances for the three months between September and November. Then I had a sworn translator translate it into Spanish.

By having the letter written, I only had to have one page (well, two pages because the second page was a notarized seal) translated. That is much less costly than needing to translate each statement.