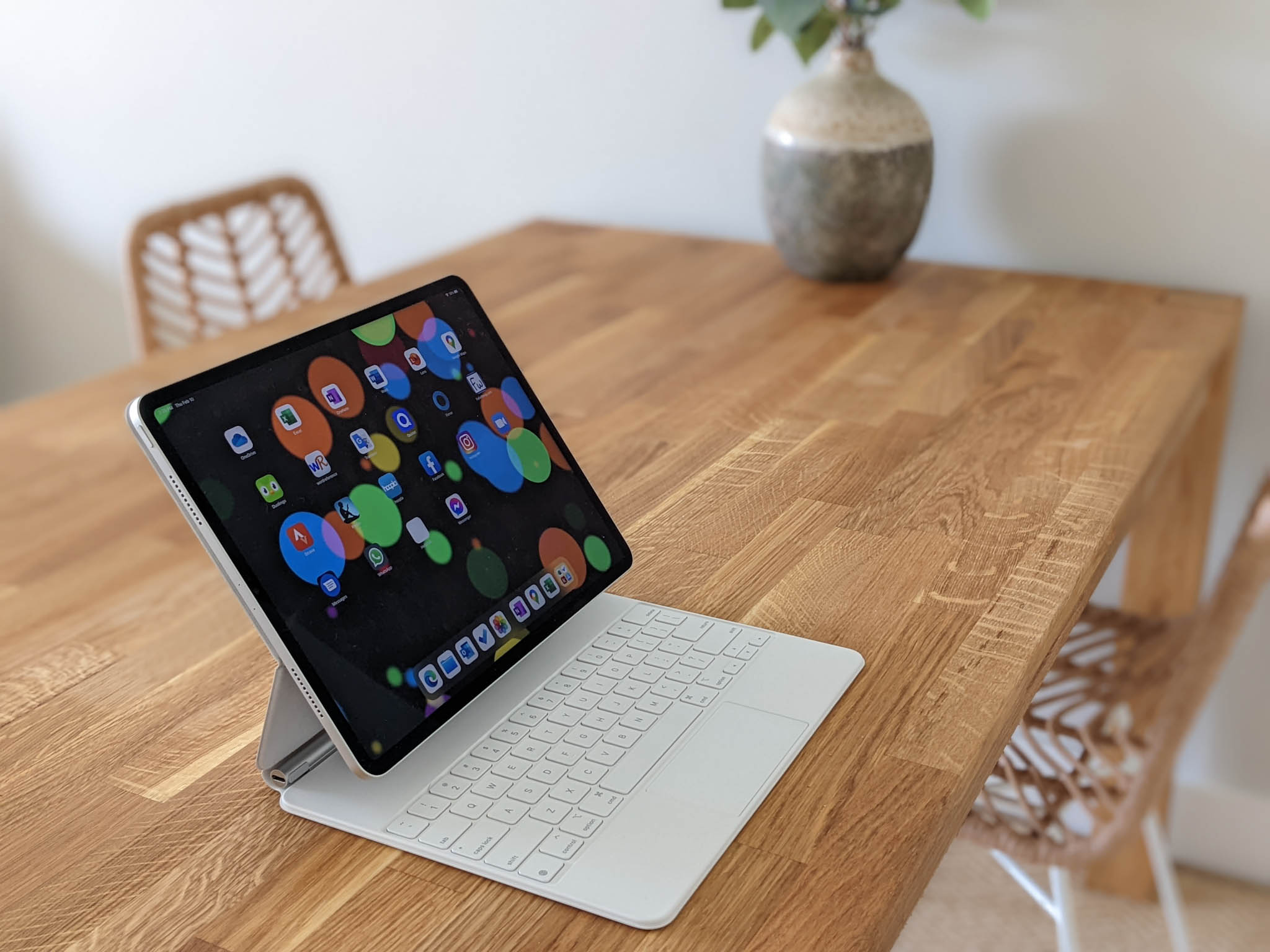 There were two days remaining before jumping on a plane from Colorado to Spain for good. With still so much to do, I hastily swapped out the aftermarket battery in my HP Spectre x360 convertible laptop. That aftermarket battery only lasted four months before it would prematurely die at 50%.

I inserted the warranty replacement battery. Due to my rush, I did not realize that the connector for the new battery was keyed and reversed. Then I connected it to the computer… backward.

Long story short: I fried the computer. My most important possession was dead. I took consolation that I had gotten nearly four years of daily use out of it. But I had just a couple of days to replace it lest I gamble and try to find a new one in my new, but foreign, country.

I decided to do something I had been pondering and researching for months: switching to the Apple ecosystem. But not over to a Mac.

Instead, the next day I went out and bought the latest iPad Pro with Apple Magic Keyboard.

I have been an unabashed Microsoft fanboy for the last 10 years. Why the change?

The reasons are as follows:

Why Not Get a Mac?

I used Macs in the computer lofts at Stanford University in the 1990s and owned various iBooks in the 2000s. Therefore, I was already familiar with macOS.

My principal objection to the Macintosh is that it still does not support touch input.

I have used and appreciated touchscreens for the last 10 years, starting with a Windows Phone and then the original Microsoft Surface. The lack of touch support was a dealbreaker.

Meanwhile, every technology publication agrees that the touch experience on an iPad surpasses that of any other operating system. YouTube videos had also convinced me that iPadOS has progressed enough to accomplish 98% of the things I did with Windows.

Why Not Use a Mac AND an iPad?

All Apple enthusiasts seem to own an iPhone, a Mac, and an iPad—and often several models of each. While that is great for Cupertino, that is not so good for the environment or people’s wallets.

As a minimalist, I do not want to have more than two computing devices. In the last few years, I have happily used solely a convertible laptop and smartphone. I even gave away my workstation computer, and I have not missed it.

I have been using laptops with screens of at least 12.3 inches since 2015, so I wanted an iPad at least that large. Therefore, the iPad Pro in its 12.9-inch variant was the only option.

I bought the latest, fifth-generation iPad Pro 12.9 because that is what was available in stores. It features Apple’s M1—the same chip used in MacBooks—and an XDR display that uses mini LEDs.

In hindsight, if I needed to save cash and had more time to look for deals, I think I would have been perfectly happy with a third- or fourth-generation iPad Pro 12.9. Apple’s older chips are still super fast and I don’t think I would have missed the better display or cameras. I hardly use the latter.

An intriguing alternative that became available in March of this year is the fifth-generation iPad Air, which is significantly less expensive than the Pro. It has the same M1 chip, but shorter battery life and only an 11″ screen. Considering that I thought the 10.6″ screen of the Microsoft Surface RT was adequate, 11″ might be fine. The iPad Air works with the 11″ version of Apple’s Magic Keyboard.

Advantages of an iPad Pro Over Windows Devices

What I love most about the iPad is its hardware. The first 13 advantages above are hardware-related.

Apple products carry a premium price tag, but they maintain higher resale value. Therefore, their cost may not be more than competing mid-range products in the long run as long as you do not lose or break them.

Benchmarks show that Apple’s M1 chip outperforms most Intel ones despite sipping much less battery power. The chip, coupled with mobile software that is usually much less resource-intensive than their desktop counterparts, makes the iPad performant.

But there is another reason why an iPad seems way faster than a PC: app management. With a PC, to save battery life, RAM, and CPU, you need to manually close unused applications. Then you need to re-open them when you want to use them again. In my experience, if you kept the applications open, battery life could be reduced by hours.

In contrast, an iPad is like your phone and designed so that you don’t need to keep closing and opening apps. Unlike on a PC, force-closing apps on an iPad (and iPhone) uses more battery power, not less. Instead, an iPad “tombstones” unused apps so that they do not use battery, and quickly resumes them when you switch back to them. Resuming is far quicker than reopening. So app switching on an iPad is instantaneous.

Some people bemoan an iPad’s lack of USB-A ports, SD card readers, or even a headphone jack. But not I. To me, all those things are relics of the past. I have yet to miss them using the iPad Pro full-time.

My gripes with the iPad Pro have to do with software.

Apple’s Files app is the file management system for iPadOS. It debuted in 2017. It was a good start and at least supports third-party cloud services like OneDrive. But it still lacks functionality that Windows and Mac users take for granted with File Explorer or Finder.

On the other hand, Files on iPad is much more responsive than File Explorer on Windows for navigating through OneDrive folders. File Explorer seemed to get even slower with the Windows 11 update.

An occasional side effect of that fast app switching on the iPad is that it doesn’t always remember where you were in an app, especially if you haven’t used it in a while. This is usually only a problem in a third-party app.

For example, I could be reading an HTML email in Microsoft Outlook, switch to another app, then go back to that email two seconds later… and Outlook shows the email back at the top instead of where I was last reading. That never happens in Windows. (It is also a reason I now use the Apple Mail app instead.)

Another issue is that sometimes when I switch away from an app and then switch back to it, the keyboard stops working. To get it to work, I either have to switch between apps again or force-quit and re-open the app. Sometimes undocking and re-docking the keyboard gets the keyboard to work again. This bug is my biggest complaint about the iPad because it is a productivity killer.

Most Microsoft applications are pretty solid on iPad. When there is reduced functionality, there are workarounds. See my article “How Well Do Microsoft Apps Work on an iPad in 2022?“

That said, Microsoft apps can be more enjoyable to use on iPad due to being designed better for touch. Hopefully, Microsoft will reduce the functionality gap between their apps on iPad and Windows over time.

Some things are just impossible to do natively

There are a few things that are impossible to do natively on an iPad. Here are examples of what I’ve encountered so far.

The good thing is that you can do all of the above with an iPad using a virtual machine (VM). I’ve done all of the above using a Windows VM I quickly set up on Microsoft Azure. The VM was inexpensive—less than 15 cents an hour for the VM, disk space, and bandwidth. Microsoft’s Remote Desktop Mobile app for iPad works amazingly well with the VM. With a good internet connection, the experience almost feels native. It’s like running Windows on an iPad.

I described how I did #1 in another article. It involved using the iPad, a VM, iTunes, and Apple’s $25 iTunes Match service.

Being able to use any iOS app on iPadOS is an advantage over Windows—which has comparatively few apps—or Android, whose phone apps most often aren’t optimized for tablet devices. Most of the time, the apps are more performant (quicker) than using the same service in a web browser.

However, I have encountered a few instances where I prefer the corresponding website or Progressive Web App more. Below are some examples.

Tip: Unlike Microsoft Edge for Windows, Safari currently cannot make just any website behave like an app, including opening them in their own chrome-less window; they have to be PWAs. But you can turn any website into a full-screen app using Shortcuts!

The Types of Tasks I Do with the iPad

One criticism I have seen leveled at the iPad is in regards to multitasking and windowing. You cannot display more than two or three windows at once, and you can’t freely overlay them freely like you can in Windows or MacOS. (Edit October 22: This has been addressed in iPadOS 16 with Stage Manager.)

My take on multitasking is more subdued. I am perfectly content with the iPad’s Full Screen, Split View, and Slideover functions. Split Screen is a more visually appealing and efficient use of screen real estate than overlaying windows, and Slideover works as an overlay when Full Screen is only available for an app like Duolingo.

It would be great, however, if an iPhone app that is not optimized for the iPad can be used in Split View instead of only Full Screen mode.

I used the iPad Pro 12.9 as my only computer for two months before writing this article. I had stopped using Apple products around 2006 and have only used Linux, Windows, Windows Phone, and Android since then. You can imagine, then, there was a learning curve and some frustrations to overcome.

Yet I was determined to give this experiment a fair shake. I’m now not only comfortable but enthusiastic about using the iPad as my only computer—with an Azure-powered Windows VM as fallback for the infrequent times I must use a PC.

I hope that Apple continues to develop iPadOS and particularly the Files app. The software is the only thing holding the iPad Pro back from cannibalizing Mac sales. The hardware is virtually perfect as it is.

Later in the year, I plan on swapping my Google Pixel for an Apple iPhone 14 Pro. Since I am now adept with the iPad, I expect virtually no learning curve with an iPhone. Then my transition from PC+Android to Apple-only will be complete.