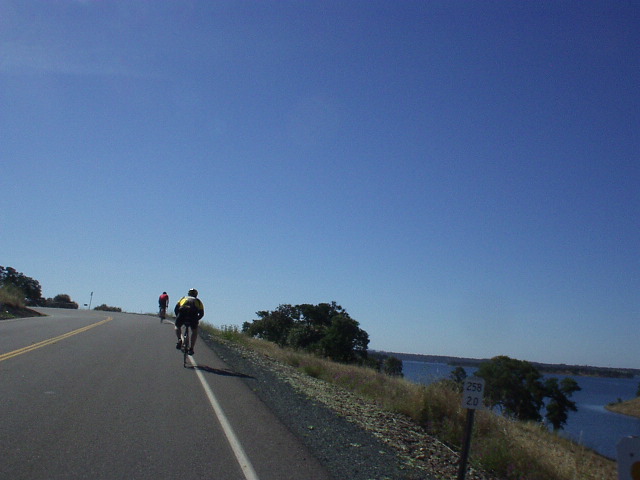 In recent years, controversy has plagued the Mokulemne River of San Joaquin County, California. Apparently, enough water was being drained out of the river that its native fish, including the Steelhead, were being threatened.

Hence the Committee to Save the Mokulemne hosted this ride as a method to raise funds. 1994 was the first year of the ride; I am uncertain whether it has continued over the years.

The ride, in scenary and terrain, was very similar to the Party-Pardee Century I did the next year. In fact, both rides went through the hills surrounding the Camanche Reservoirs, even covering some of the same roads.

Overall, though, I think the Steelhead was slightly less challenging than the Party-Pardee. The last 40 miles or so were entirely flat, meandering through the orchards and vineyards east of Lodi and north of Stockton. At one point it came within 2 miles of my Stockton home. I probably would have went directly home, but my car was at the start/finish at Lodi Lake, just 15 miles away.

But while the terrain was less rugged than the Party-Pardee, the weather was more harsh. During the summer months, the San Joaquin Valley sees temperatures of 100+ degrees Fahrenheit. Fortunately, near Lake Camanche the weather is a bit more temperate.

So how fun was it?

It was pleasant… not to mention a great way to end the school year, as I had effectively completed all finals just days before. Unfortunately, my local friend Ken could not make the ride, so I pretty much just rode as hard as I could.

Memories include blasting down a hill near the Camanche Reservoirs at 40+ mph, with a wooden bridge being the nadir. Although the flat orchard- and vineyard-lined roads east of Lodi are not much to get excited about (then again, I ride through them all the time when I’m in Stockton), the Camanche hills are pretty.