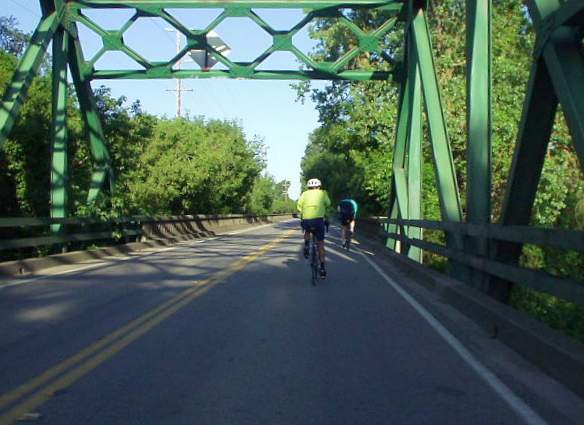 The course of the 1994 Delta Century was the same as the 1993 (and later, the 1996) edition that meandered through the vineyards and orchards of Lodi and the Delta waterways west of Interstate 5. This meant that it lived up to its promise of being “the flattest century in California.”

But after spending a year in Palo Alto with the Santa Cruz mountains to the west, I am fond of hills. They add variety and allow for thrilling downhill speeds. I also love mountain scenery.

So this year the Delta Century felt a little dull. When you’ve seen one part of the Delta or vineyard or orchard, you’ve seen them all. It was hot outside, too.

The winds after the first rest stop were strong. Climbs are fun to conquer, but headwinds are not.

That said, the support was excellent and so was the food selection, including some of the largest strawberries I’ve ever seen. The Delta Century is a good ride to have a friend along and I was glad Ken rode with me. The heat, the wait for a ferry to transport cyclists over the Delta, and the numerous rest stops did not inspire time trial efforts but were ideal for conversation and relaxation.

Ken and I felt energetic and unstrained after the ride was over. In contrast, last year we felt really tired. It’s remarkable how much our cycling fitness has improved in only 12 months.