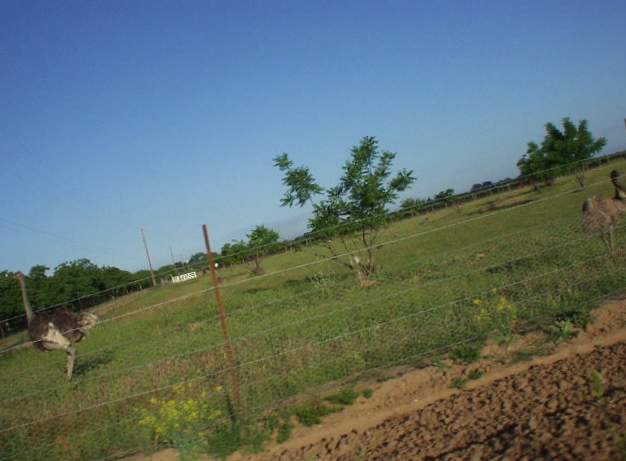 The night before the Delta Century, I did some basic bicycle maintenance… tradition, you know. But time flies I was up until 1:00 in the morning. After a half-hearted attempt to sleep a little, I packed up the MGB and started driving to Stockton. Highway 84 was so pretty at night, under the stars and through the mountains.

I arrived at Ken Loo’s house in record time, traffic being as light as it was, and had a primitive urge to relieve myself. Ken wouldn’t be up for another hour or so, so I went for a nice walk in the neighborhood. Moments later a resident opened up his front door in preparation for a 4:30 a.m. jog, and his dogs come running after me.

“Come back!” yelled the man. And then he said “Sorry oh so sorry, sorry…” At that point I went back to my car. If the dogs didn’t wake up the entire neighborhood, then Goldie did, as I accidentally set off her alarm when I returned. Then I was the one saying “sorry oh so sorry.”

I managed to sleep for 45 minutes the MGB’s comfy driver’s seat. Then Ken came out of his house and woke me up.

Ken picked up his friend Anthony, a first-time century rider on a cool Marin mountain bike. They got a ten minute head start while I was still unloading at Bear Creek High. I figured I would catch up to them in another ten minutes or so. Wrong. Soon I became a little antsy, wondering where they were, and was riding at speeds >22 mph, with my heart rate >165 bpm. This was not how I planned on pacing myself in the early going.

Finally, I catch up to my friends after half an hour, but only when Anthony dropped a water bottle. We made it to the first rest stop together. My average speed was 18.0 mph. Not bad.

After 20 minutes of chatting and munching on some food, we left the rest stop. Soon, a group consisting of three tandems and a Sacramento rider whizzed by. I looked at my friends and asked them if they wanted to try to keep up with them. They reply in the negative but tell me to go on. Pumped up by the chase in the first leg of the ride, I couldn’t resist…

I sprinted up to the group and suddenly a tandem is dropped. The two remaining mixed tandems, and the sole rider, were jamming. It had been a while since I had ridden in a paceline, and had almost forgotten how much faster one can ride. We maintained a steady 25 mph, passing everyone, but I felt bad that the other riders were doing all the work. So I volunteered to pull.

At about this time an obnoxious wind turned towards us, as it usually does in the second half of this ride. Also, a couple of stray dogs wandered in the middle of the road, and quickly I worked my way up to 30 mph. Our group momentarily broke apart and I was winded. But then our group rejoined and the tandems resumed pulling.

The Sacramento rider then took a pull and this guy was strong. We were maintaining 23 mph in the headwind, which was brisk enough that the tandems are drifting back. Suddenly we both realize the folly of losing the tandems but kept on going, not wanting to lose any speed. No problem, the tandems eventually caught up and we were pacelining together again.

It was a glorious feeling, “time-trialing” into a headwind, zooming by everyone, with nobody able to catch us. We reached the 2nd rest stop at 48 miles into the ride, and I notice my average speed was now 19.5 for the entire ride. So we must have been averaging ~22 mph over the 30 mile “leg”. Never have I gone so fast for such a distance.

At the speed we were going, I expected to wait for my friends for at least 40 minutes at the rest stop. I chatted with the other cyclists when suddenly I heard my name yelled out.

Anthony waved. I look for Ken, and then I looked at my watch. Ken hadn’t arrived yet but Anthony made it only 20 minutes after I did. He must have been riding at a pretty high speed, and I was most impressed as he was riding a mountain bike without the standard cycling attire. He didn’t even have toe-clips and straps!

“The Mount Diablo group passed us shortly after you left, and I hung on. They were going so fast, it was incredible.” They were incredible, and he was incredible. This was his first century and already at the half way mark he was still feeling strong.

Ken came in another 20 minutes later. “After you two left I thought, might as well sit back and enjoy the ride.” Ken has always been a good pacer. And his choice to “take it easy” proved to be a judicious one, as the next 50 miles would prove.

A long second half

Being content with the “time-trial” of the 2nd leg and feeling a little bad about ditching my friends, I resolved to stay back with them for the rest of the ride. Anthony was raring to go with the Mount Diablo group again, so we took off when they do.

Around 60 miles or so it was Anthony’s turn to pull, and he seemed strong maintaining a good pace. He pulled for a long time, and it wouldn’t be until a couple of miles later when I realized that it took quite a bit out of him. He could no longer keep up and was hurting. I let the group go to stay back with him.

We rested a bit and he asked me what to do in such a situation. I couldn’t think of much to say other than his courage was admirable and that he was doing remarkably well for a first century. The wind was still heinous and I tried to offer him a slipstream while we headed for the ferry that would take us across a section of the Delta.

He made it and eagerly gobbled a couple of fig bars at the ferry rest stop. Ken made it too, looking for a bag of trail mix. For the rest of the ride we would joke about how he thrived on that stuff. It was pretty good.

And here we come…

We are spending more and more time at the rest stops, but for once the three of us could relax and just chat away about everything from college life to “did you hear about the person with three nipples?” The food and support, as always, was excellent. We had a blast.

At 4 p.m. I came rolling in to the finish, and my friends came in shortly afterwards. We had great fun, and as Ken would be studying at UC Davis next year and Anthony who knows where, I realized that this would probably be the last time doing this ride together.

The post-ride meal and the lack of sleep the night made me drowsy and I felt my eyes get heavy while driving on I-5. Hence, exited the highway in Lathrop and took a nap across the street from the Chevron station. I had slept in the MGB for 10 minutes when a concerned motorist woke me up to make sure I was all right. I was, and the “power-nap” had refreshed me well enough to get me back to Stanford okay.

It was nice to see that there are decent, caring people out there in the Central Valley.