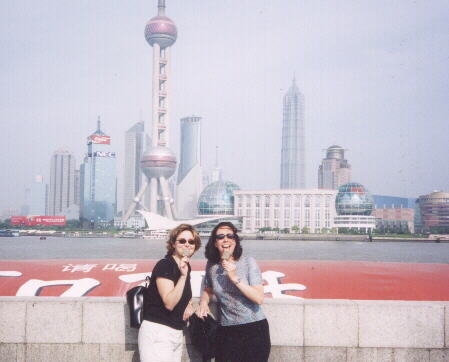 Alas, most good things come to an end sometime. And so our China tour ended in the ultra-modern city of Shanghai, featuring hundreds of skyscrapers, George Jetsonian towers, and new construction projects sprouting up by the day.

In fact, the city was changing so much that Sam—our tour guide who had left Shanghai only a couple of weeks ago to lead this tour—did not recognize one of the neighborhoods he lived by anymore. This city is prosperous, as evidenced by even the highways being lined by manicured flowers!

One last treat was in store, as an acquaintance of mine, Jim, had just moved to Shanghai from San Francisco 3-4 months prior. Initially, he had gone to Shanghai with the intention of investing in real estate, but he fell in love with the city so much that he decided to move there. (Being a dot-com software engineer he could work from basically anywhere, he said, plus he was fluent in Mandarin.) I gave him a call upon arriving in Shanghai and he promptly invited me over to a party in his new apartment that night. I had him talk with the concierge in our hotel who in turn wrote down directions for me to hand to a taxi driver, and later that night, Karen, Martrese and I were in Jim’s swanky apartment near the 100th floor.

When Jim purchased the apartment he was able to specify options to his liking, like all hardwood floors, etc. Instead of having a car he had his own driver who he could call a few times a week, and his own maid who would come in for a couple hours a week. Those luxuries are affordable here! We enjoyed talking with Jim and some of his friends before returning safely to the hotel by 10:00 p.m. or so, much to the relief of Martrese’s mom who openly pleaded with me to make sure Martrese and Karen would be safe. With me, of course. 😉 Much thanks to Jim for the invite!

Our last night in Shanghai was somewhat, um, dramatic, with Karen, Martrese and I going to the Kiss Me Bar in Shanghai to indulge in some drinks (as was usual during the nights of our trip). Martrese checked out of the bar a bit early leaving Karen and me alone, and noticed that we weren’t the only ones there being, um, intimate. In fact, on the way to the bathroom, Karen noticed a man being lead to a room filled only with women, which led us to speculate what was going on there.

A final surprise was that the bar would not accept credit cards or let me put the tab on my hotel check, as “we’re not part of the hotel” explained the waiter there. This pretty much confirmed in our eyes that this bar was basically a sex joint! We got out of there and had some good laughs that night.