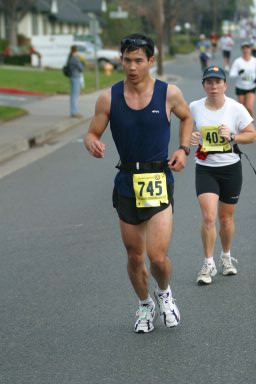 I thought I was prepared. In the 3-4 weeks before CIM, I had done training runs of 12, 21, and 20 miles, and though I was slow, I generally felt fine. In addition, less than 2 months before that I had done the Providian Relay with the Tri-City Triathlon Club. While this hardly constitutes much training in anyone’s book, this was quite a bit for me. (Nevertheless, my dear friend Kathrin pointed out–who did very well in her first marathon this year in Ohio–told me the night before CIM, “I’d be mad if you beat my time because I did about 100 training runs while you only did 4!”) Anyhow, so the week before CIM I was fully expecting to do fairly well, setting a goal to finish under 4 hours as I did in the Napa Valley Marathon last year.

One problem though: the Monday before the race, I got sick!

Now, it just seemed like a bad sore throat at first, and having 6 days to recover, I fully expected my body to recover soon. Indeed, I seem to recover from colds pretty quickly. But the cold I had soon turned into a minor bronchial infection, as evidenced by all the crap I was coughing up, and by Thursday night, I was feeling less confident that I’d be feeling 100% well by Sunday.

I tried the usual tricks, like lots of Vitamin C, soup, and liquids. I even read about home remedies on the ‘net such as ginger tea, garlic, and onions. Out of desperation I even swallowed many cloves of garlic the night before and attempted to eat a whole onion. (Unfortunately, I could only eat 3/4 of an onion… it is just so hard! I swear, eating a whole onion would make one heck of a challenge for the TV show, “Survivor”…) I did seem to feel a little better on Thursday night, but completely regressed on Friday when I had to go into a machine shop where there were welding fumes and other nasty stuff all over place.

Nevertheless, after recalling the epic 1999 Terrible Two which I did despite having an even worse case of bronchitis, I decided I would run the race, healthy or not. “Some people run a race to see who is fastest,” once said legendary runner, Steve Prefontaine. “I run a race to see who has the most guts.” Likewise, the race for me would be to prove, if only to myself, that I still had guts.

And so on Saturday afternoon, I drove up to Sacramento, despite still feeling somewhat congested, somewhat feverish. After picking up registration materials I retired to my motel room early in the evening, only to talk with my friend Kat who called to offer encouragement, and… sleep.

By morning, I was still not 100%, but feeling better I had all week. I saw all my friends from the Tri-City Tri Club who were doing the race at the start: Al, Everitt, Russ, and Sharon. And it turned out I was not the only one who was not completely healthy: for the last week or so, Sharon had been hurting due to what her doctor diagnosed as an inflamed rib lining. She was in so much pain 2 days before that she was unsure she could run! However, the day before she was able to swim for half-an-hour… and the pain didn’t seem completely horrendous, at least while she continued to take 4 prescription-strength Moultrins a day. So she came down to run. Tough cookie.

Sharon and I even decided to run together, not just because we both were not 100%, but because her best marathon time was just one minute faster than mine (3:58:xx vs. 3:59:07). Hence, we thought our pace would be about the same. Not to mention, Sharon’s a really cool person to hang with!

Anyhow, at 7:05 a.m.. the race had begun! As Sharon and I started pretty far back in the pack, our forward progress was really limited by the crowd we were engulfed in… and our first mile passed after a dismal 10.5 minutes. Despite the slow pace, for the first 2 miles or so, my shins were already feeling tight. Odd. Fortunately, such tightness went away after a few more miles, and our overall average speed had dropped to 9:15/mile pace, due to a few sub-9 minute miles.

By the half-marathon mark of 13.1 miles: 1:59:xx had elapsed. Both Sharon and I were pretty disappointed in this! In every single half-marathon I had done (including the first half of the 2 previous marathons I had done), only 1:53 or 1:54 had elapsed at this point.

Not to mention, I was feeling much more tired than my training runs already. And Sharon had to go to the bathroom!

I kept on going when Sharon said “go on ahead, I’ll catch up.” I had no doubt she would–I was not feeling strong. I ran another 3 miles without her. By Mile 16, Sharon had caught up and we were running together again. But not for long… I was fading fast!

By Mile 16.5… I was starting to lose sight of her. It was now a matter of running my own race, which, at this point, was reduced to the goal of finishing!

I was walking at Mile 17. Even this hurt. I’d make sporadic efforts to jog, but there was nothing in my legs. I desperately consumed my Clif Shots (which are like the GU gels). And yet I was feeling worse and worse.

I’d continue this way for several more miles. However, at Mile 20 or so, I convinced myself that all I needed to do was commit myself to “mind over matter”. I decided that I was going to trick my body by thinking only positive thoughts at this point, and soon was off in a trot. For maybe 1/4 of a mile, I was going at probably an 8:00 minute pace, passing quite a few surprised people!

But that was all I could muster in that inspired moment. Because then practically every muscle in my body started cramping, including my arms!!!

I remembered my very first marathon–the 1999 Silicon Valley Marathon–in which I only did a 6-mile run as my “long” training run of the year, in which I was completely unprepared and finished in 4:56:36. Now this was entirely embarrassing–it was very demoralizing to think I was not at risk for not even beating that effort! Sick or not sick, this was not acceptable!

So once again, I committed myself to run. And this time, I knew that if I was to have a shot of at least beating my first marathon time, I could not walk anymore.

So with this new motivation–along with being tired of walking–I ran and ran. Back to a 9:00 pace or so. I was actually passing people. And up ahead, I could see the banner for the Mile 26 mark, meaning that the finish–at Mile 26.2–was getting very very close!

The next day I would write Sharon, inquiring how it went for her. She finished >30 minutes than I did, but expressed disappointment with her time and that she also had to walk. She also related with humor how her elementary school kids (she’s a teacher) kept asking her “what is wrong” since she was so sore just walking across the classroom! Yet, to me, especially considering her inflamed rib lining thing, she had run a heck of a race. For she, too, had proved she had GUTS.