Late last year, my friend Mike had moved to Portland from the SF Bay Area, having found a new job there. Fortunately, the move didn’t quell his enthusiasm for cycling, which he started doing in early 2002, and soon he sent out an email asking his ol’ friends, “Anyone want to do the Seattle-to-Portland Bicycle Classic with me in 2003?” Needless to say, this was something I could not turn down. Neither could Kevin, Mike’s friend and former coworker, also from the Bay Area.

I figured, it would be a good multi-day training ride for Paris-Brest-Paris, which was to be held the month afterwards, and a great chance to finally explore parts of Portland, Seattle, and western WA–all of which I had heard many positive things about. For Mike, it would be his 2nd and 3rd century, having done the World’s Most Beautiful Century in Lake Tahoe the month prior. And for Kevin–what can I say? This would be his very first bike ride over 50 miles, so it would be both his 1st and 2nd century ever. If this sounds a little crazy, I should preface that by saying Kevin is both in shape and has lots of guts, as evidenced by his recent 5-day climb up the face of El Capitan. He also was highly motivated–his newborn baby was due in just over a month, so he was eager to get out and have as many outdoor adventures as he could before fatherhood and all the responsibilities that that entails.

Mike did most of the planning; all Kevin and I had to do was get our bikes, bike locks and ourselves up there. I drove for 11 hours to get to Mike’s place in Portland on Thursday, while Kevin flew up to Seattle on Friday night. Kevin shipped his bike to Mike’s in advance by UPS, and Mike put Kevin’s bike together sans seat and pedals (something Kevin had forgotten to send but brought the day afterwards).

Then on Friday morning, Mike’s friend Katie picked us up and dropped us off at the Doubletree Hotel in Portland. There, we loaded the three bikes into moving trucks the STP organizers had rented, and then Mike and I boarded a tour-type bus to take us up to the University of Washington in Seattle. Mike and Kevin’s friend Claire then picked up Mike, Mike’s bike, and Kevin’s bike in her Volvo, while I biked 26 miles over to Claire’s home in Redmond, meeting Claire and Mike there just 5 minutes after they had arrived. This is where we were going to all stay over the night before the start of the STP Classic.

Later that night Claire’s husband Mark came home from work, and we all had a most wonderful dinner of Hamburger Helper and salad. Then Claire and Mark let Mike and I borrow their car to pick up Kevin at the Seattle-Tacoma Airport. We all came back, spent about half-an-hour calling taxi companies to find one who could pick the three of us up (and our three bikes) on Saturday morning and drive us from Redmond to the U. of W.

So at 5:00 a.m. on Saturday morning, there was a taxi waiting for us right in front of Claire and Mark’s house waiting for us. Or rather, it wasn’t a taxi, but a huge BUS! The taxi company decided it was easier to bring a big bus instead of a big van as we had requested, and sure enough, this bus was definitely large enough to carry 3 people and 3 bikes.

Anyhow, if you managed to read and understand the last 3-4 paragraphs… congratulations! It underscores how complicated planning got, so much kudos and thanks goes to Mike and esp. Claire and Mark for letting us stay at their lovely home (and play with Hayden, their new baby!) That it all went so smoothly is also amazing.

At the U of W, we checked in, got our ride numbers, etc., and was soon riding… with 8000 other riders. The ride quickly left metropolitan Seattle and soon went by the most beautiful part of the ride, a 10-15 mile stretch along lovely tree-strewn roads by the southern part of Lake Washington.

For the first 30 miles I pulled at a rather enthusiastic clip, and many other riders joined on our “train”. Then came “The Hill”, which was the only climb of any significance during the entire ride, being 1 mile long at 9% grade. The rest of the ride was either flat or rolling.

After “The Hill” we toned down the pace considerably, esp. after realizing that at the pace we were going, we were going to be done with the first 100 miles (which was all we intended to do on Saturday) by 2:00 p.m., and then have just way too much time the rest of the afternoon to just bum around. So we stopped more, enjoyed the good food, and checked out the interesting bikes. There were many, including many recumbents, racing trikes, handcycles, tandems, even tandem recumbents! There were many mountain bikes and a few tri bikes in addition to the usual road bikes.

Miles 50-100 were generally plagued by strong headwinds that would not go away. At Mile 80 we came to one of the nicest mini-stops of this ride: a verdant park with lots of shade under towering trees. We spent at least 40 minutes there, just relaxing and napping. It was also the site of one of the several incidences we’d see people just falling off of their bikes during the ride. The primary culprit: people not seemingly able to get out of their clipless pedals in time!

By 3:30 we arrived in Centralia, which is where we’d stay for the night at the homestay of and Lisa Westley. They cooked us an awesome dinner of lasagna, salad, bread, and jello, followed up in the morning by delicious pancakes, juice, and eggs. Quite a treat!

The homestay was also the site where we met a fellow cyclist named Maria, a native of Seattle and a very nice one at that. We’d see her later on in the ride.

After the scrumptious breakfast, we all stepped outside, ready to go, only to realize it was quite wet outside. Far from the “scattered showers” predicted, it was a steady rain. We threw on our Tyvek STP rainjackets, thinking that this could potentially make for a long day, as none of us had brought any other special rain gear.

Fortunately, once we left Centralia, the rain had stopped. Supposedly, this exemplifies the weather of Seattle and Portland pretty well: there are many, many days of the year where the skies are overcast and drizzly, but there aren’t often horrendous downpours. It does rain a lot, though: Mike stated that last winter Portland had 36 consecutive days of rain! And Claire confirmed that in the summer, it rains about once a week in Seattle. Yet those from either of those cities will readily point out that they have less annual rainfall than both Houston and New York City, mainly because of the lack of torrential downpours.

We were much happier after the rain had stopped but for the first 30 miles on this day we went a very conservative pace–a big contrast to the day before. The course did seem to have more hills but, again, nothing was long. In fact it was the epitome of “rolling”, the type of course I favor–enough hills to escape the boredom of flatness, but nothing super long or steep to make one’s heart rate shoot the roof.

Nevertheless as we had all day, we stopped at virtually every ministop and official food stop, and for a long period of time. At the food stop at Mile 140, we all stuffed our jersey pockets with bagels, sandwiches, wraps, etc., having learned from the day before that the official food stops were pretty spread out. At this rest stop I also saw Zach Kaplan and got to talk with him for the first time in 3 years, having last seem him in the 2000 Death Valley Double. On this day, he was riding a new Bibha recumbent that looked very slick, though heavy (50 lbs.) Zach said it wasn’t even that fast on the downhills due to a lot of frontal area. However, it was very high tech, sporting integrated cyclometer and self-cancelling turn signals, an anti-theft system, disk brakes, etc. Bibha, apparently, is an upstart in Oregon new to the recumbent world.

The next 40 miles were fairly uneventul, aside from having to cross a long bridge where it started raining again. On this bridge were some steel construction plates we had to ride over which could be quite slippery. Kevin, as he’d later tell us, started goofing off on this section, realizing that he could easily spin his wheels if he applied a lot of torque to the pedals while going over these steel plates. However, the second time he did this, he… went down. Whoops! But he didn’t cause anyone else to crash or run over him, and he escaped with little damaged, so it was more of a humorous moment than a little tragedy.

The sun came out again and at the last ministop, with just 16 or so miles to go, we saw Maria! We spent a lot of time talking and then finally hit the road again to complete the last leg of the ride. During this time I learned that she, like Kevin, had never done a ride longer than 50 miles before. Amazing–both she and Kevin were still looking very strong at this point.

Indeed, with just 6 miles to go, Kevin was feeling so strong that he decided to just go for it! I had enjoyed riding and talking with Maria and was torn about whether to hang back with her and Mike or follow Kevin, but then we got to a construction zone in which single-file riding was only possible and, feeling very energetic myself, decided to go with Kevin. Soon the two of us were haulin’, with me in an aero tuck and him in tow. Memories of the recent Ironman Triathlon in Coeur d’Alene came to mind, as that was the intensity I was riding… not quite at the very limit, but darn near-flat out.

We had to slow up through the traffic of downtown Portland and the zigzags of a bike bridge over the Willamette River, but soon there was the finish of City Park. Hundreds of spectators were lining the finishing leg to give us high-5’s and an announcer was there to publicly congratulate each and everyone of us. To make it even more dramatic, staff was on hand holding up medals, which we had to swipe out of their hands after crossing the finish line.

Not long afterwards Mike and Maria came in. Kevin and Mike then went to get some beer while Maria went to look for her husband Scott, who was actually the managing director of this event. Then Kevin, Mike and I hung out for about an our, just chillin’ and watching a 21yo dude from the U.S. National BMX Team do some stunts on some tables and other platforms.

After riding back to Mike’s home and showering up we decided to treat ourselves to steak at an upscale restaurant called Ruth and Chris’. The steaks were really expensive but were very, very good.

My final thoughts about the ride? It was a great way to get a tour of the Pacific Northwest while getting to visit Mike and Kevin for the first time in a long while. Belying the 200-mile distance, the ride is fairly leisurely, with more cyclists and interesting bikes than you’d see on perhaps 95% of the other rides in the U.S.. The food is good and the ride is very scenic and fun. If you don’t mind the crowds and are looking for a relaxing way to spend an entire weekend, this ride is for you. 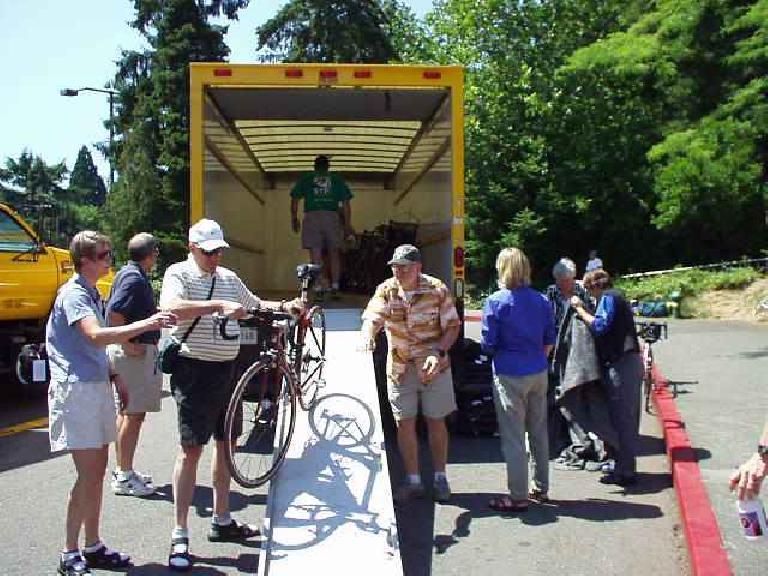 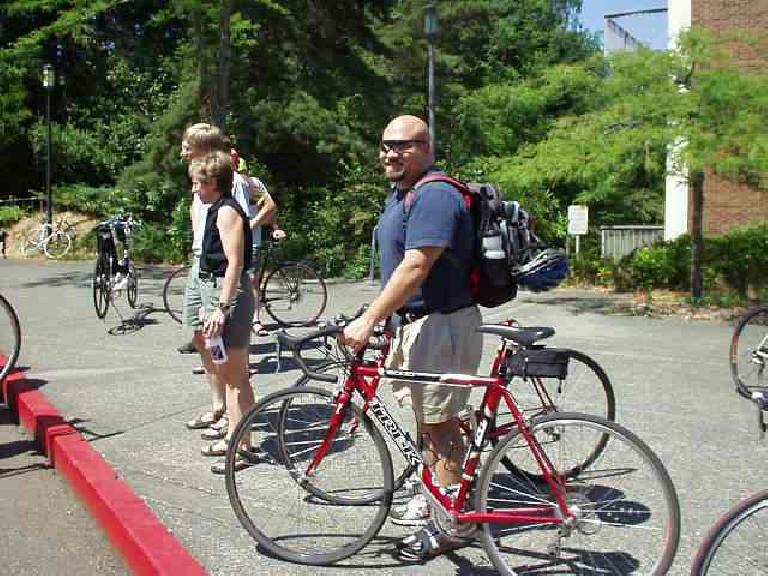 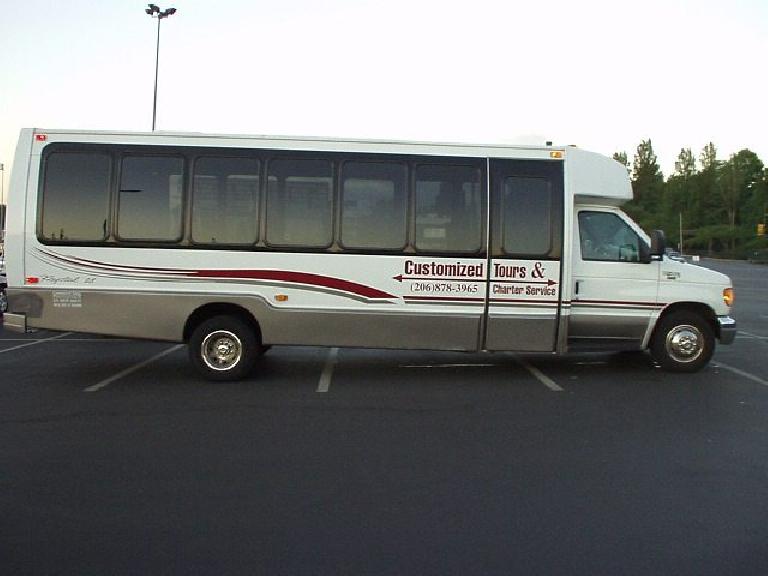 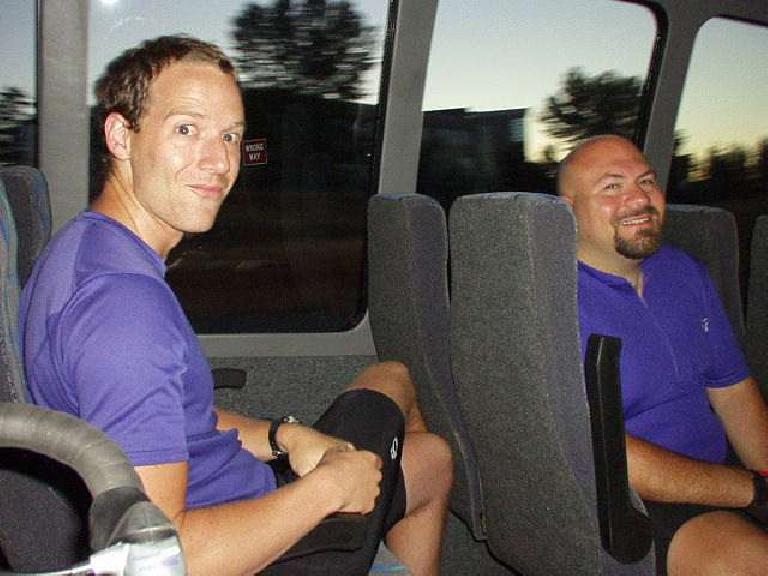 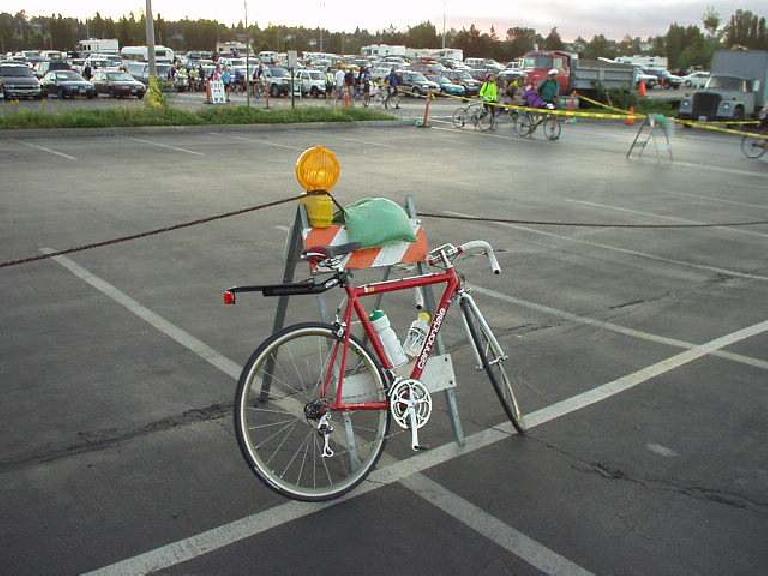 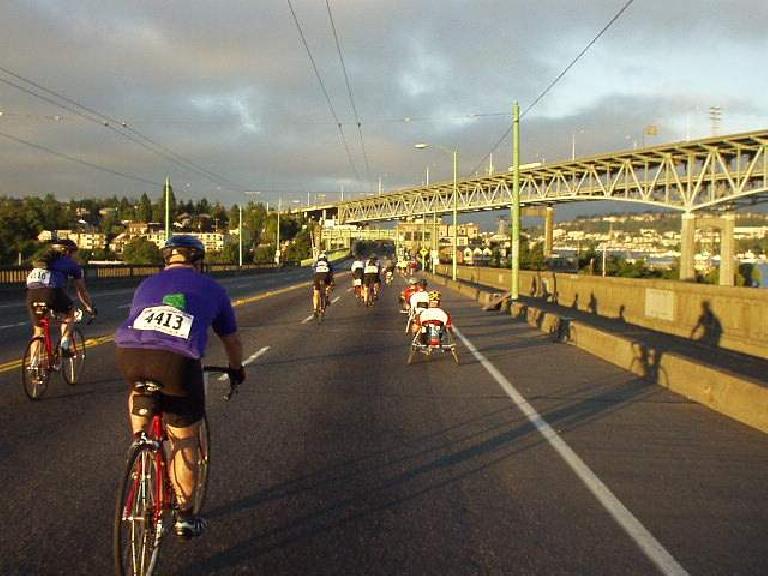 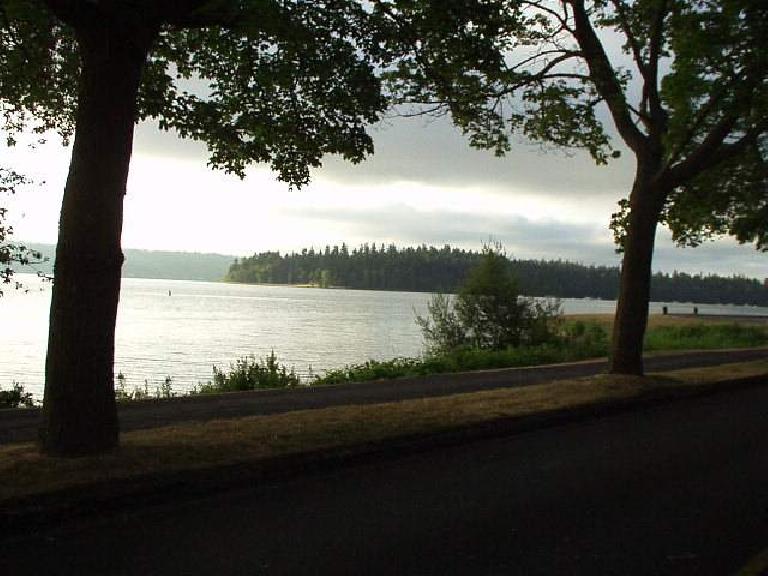 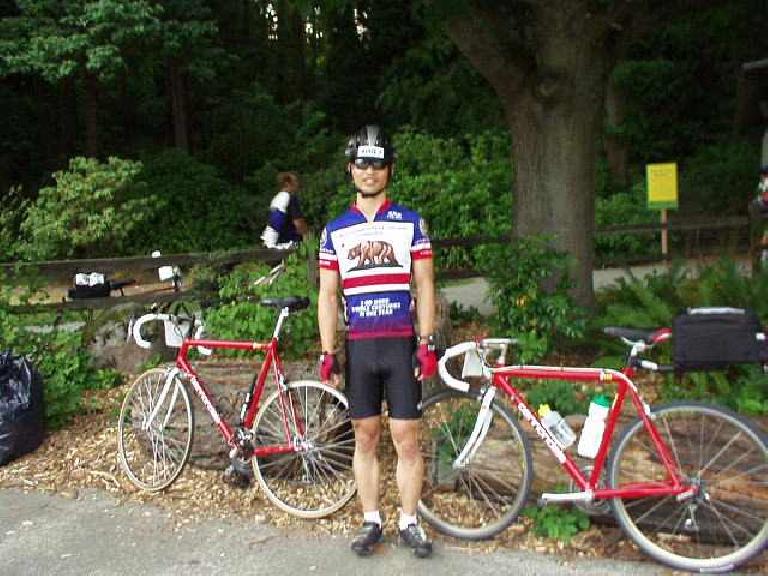 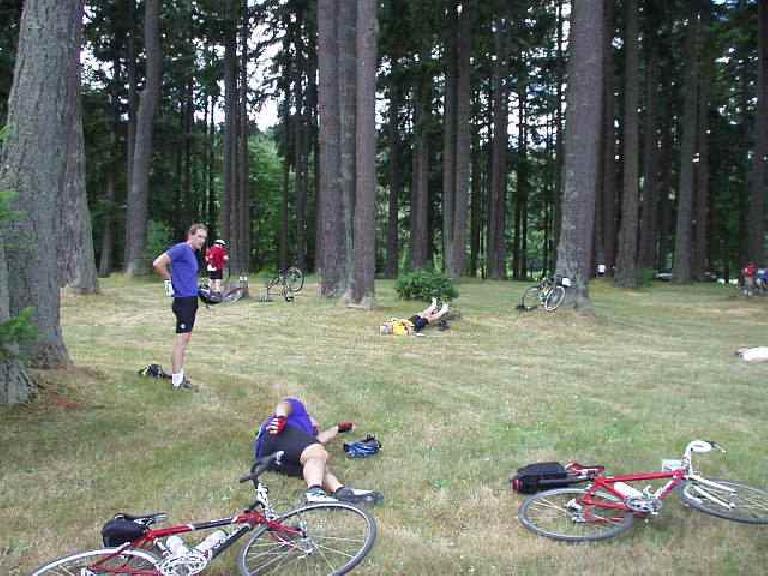 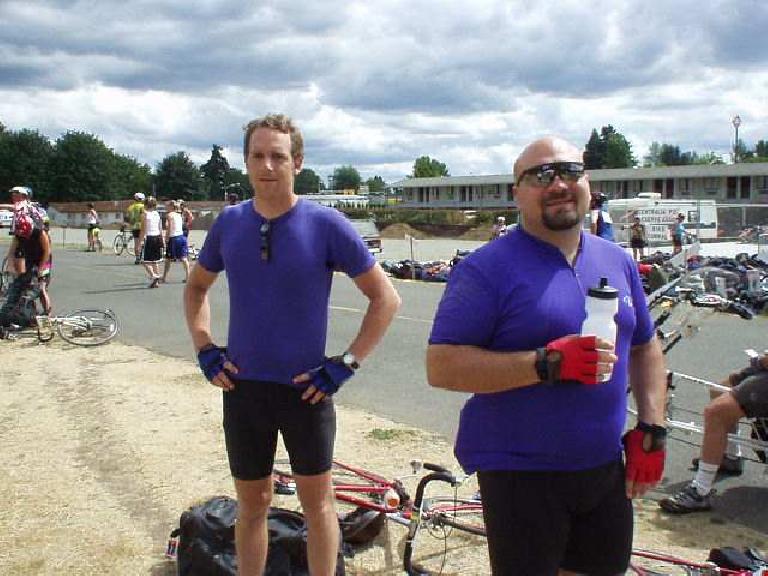 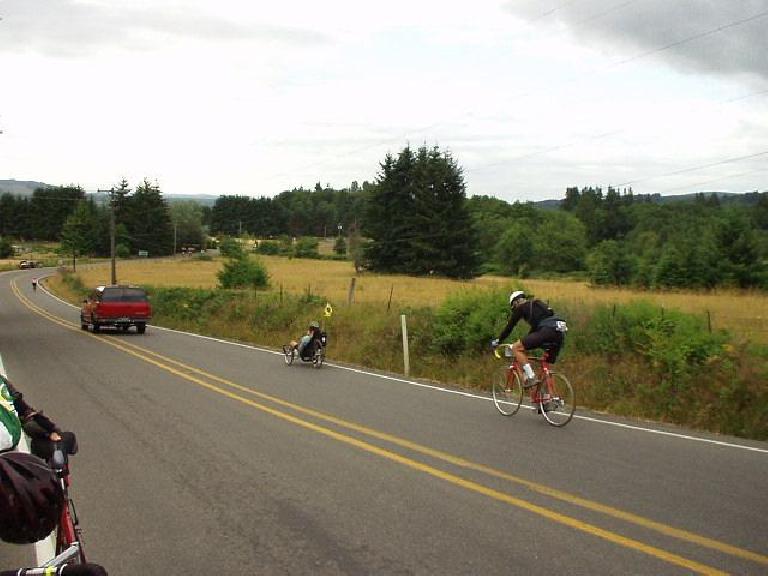 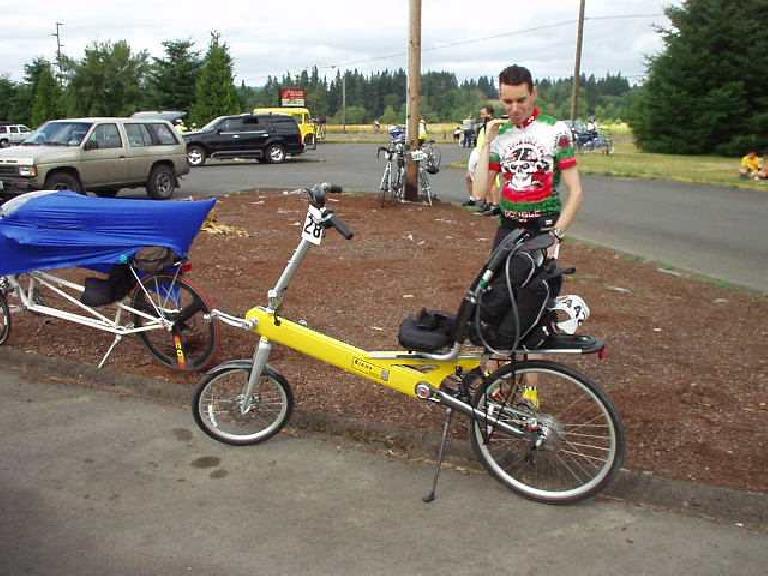 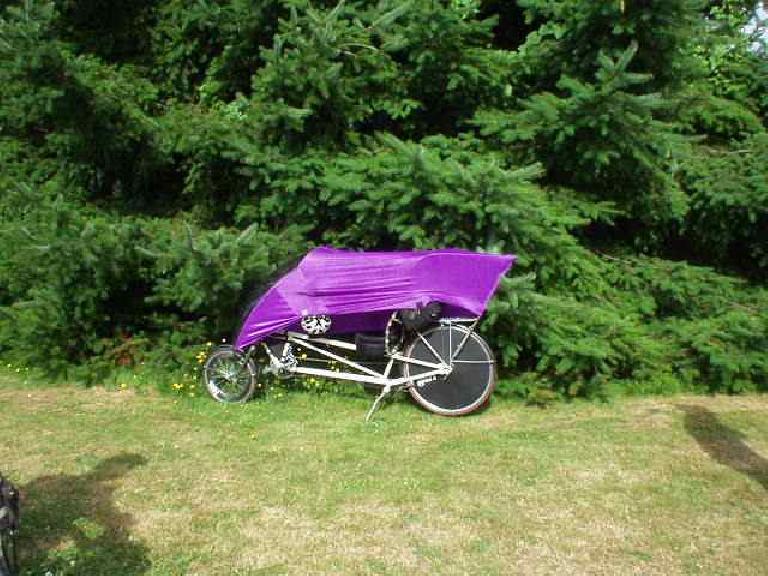 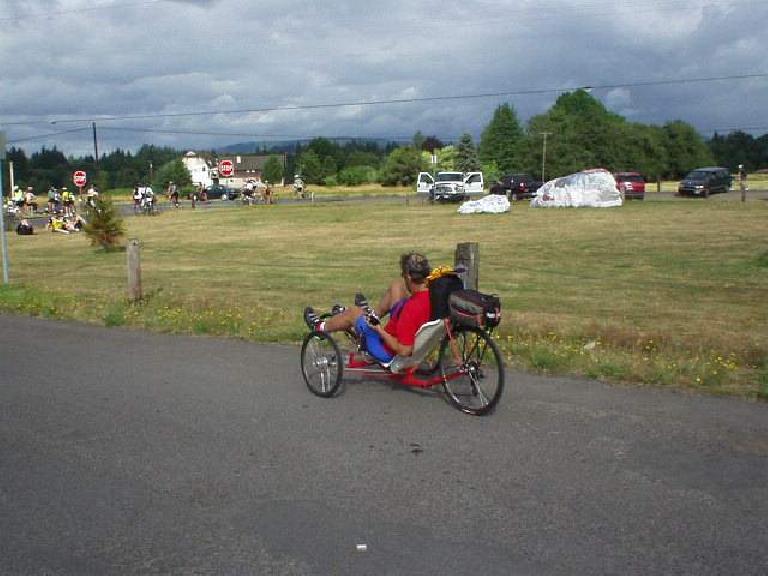 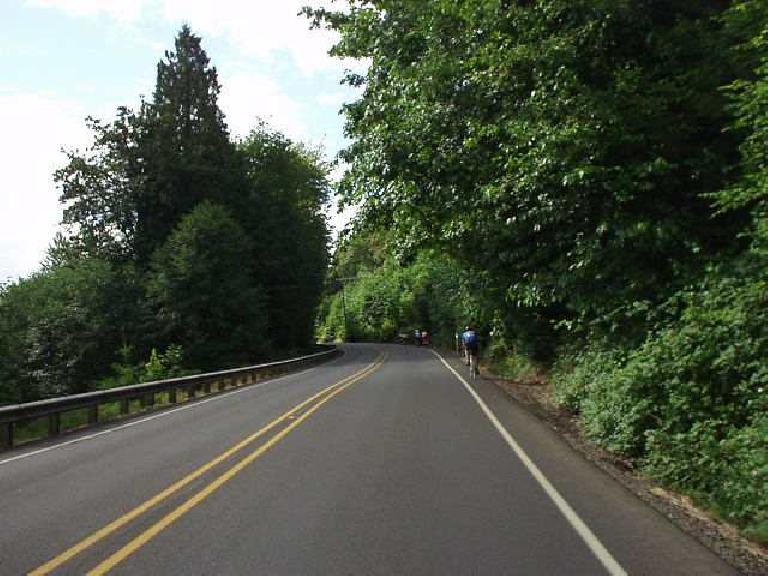 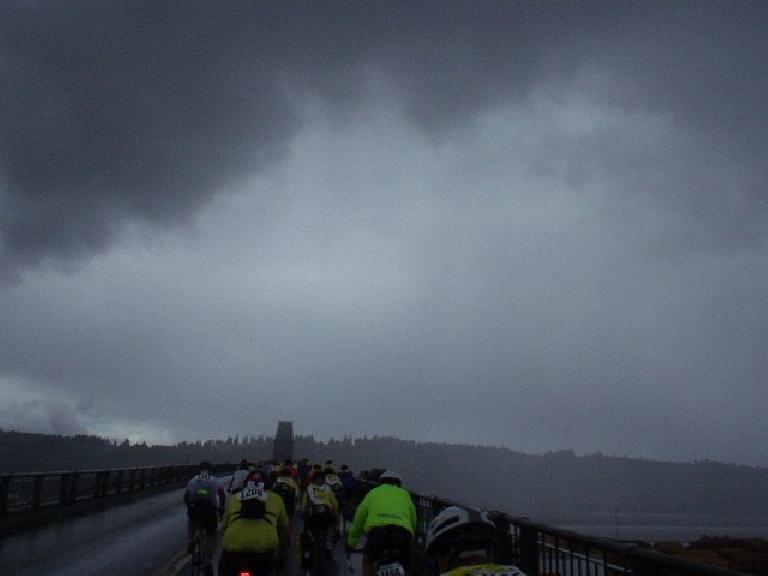 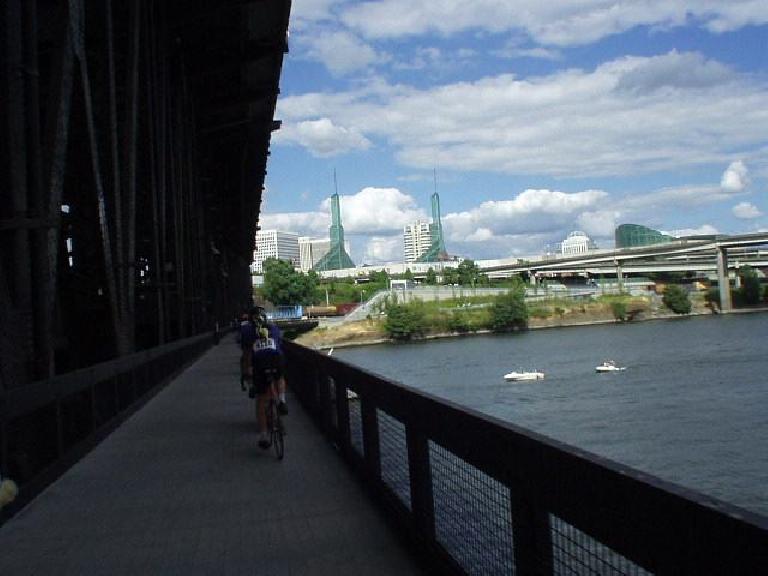 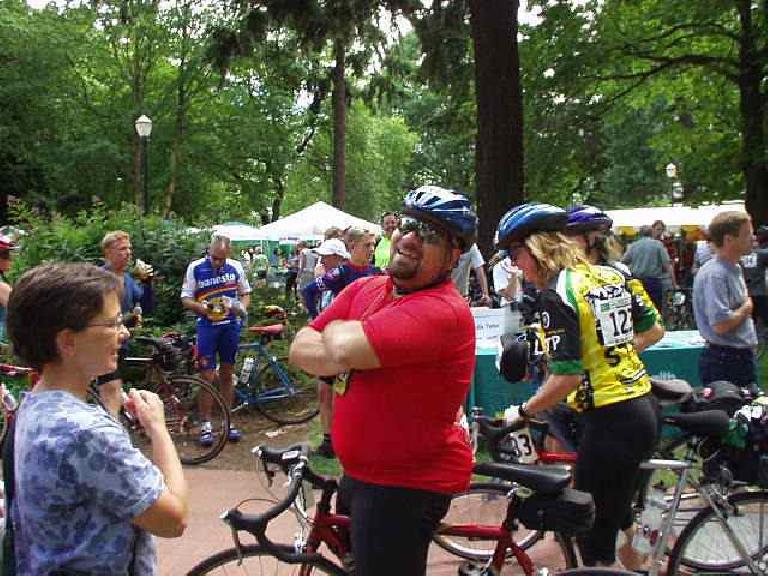 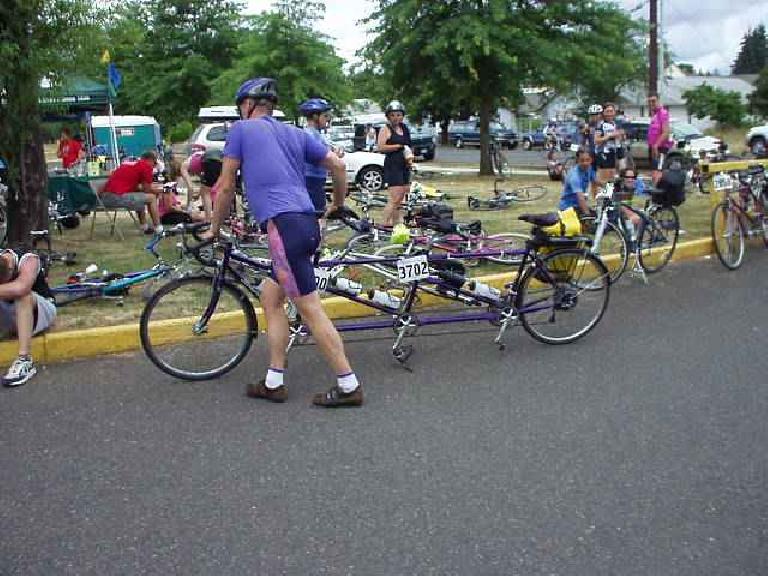 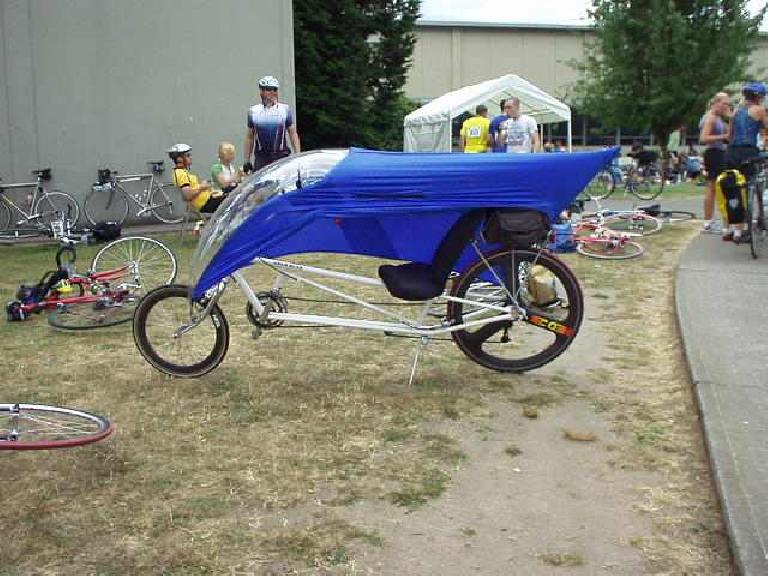 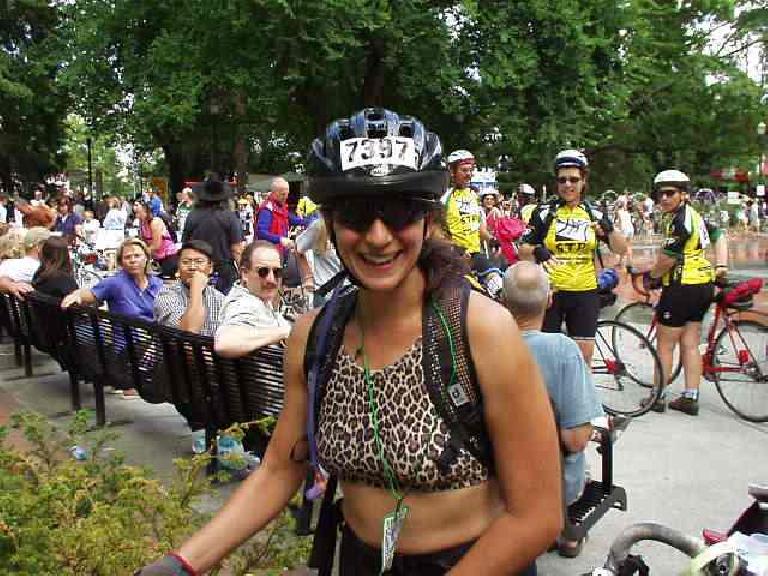 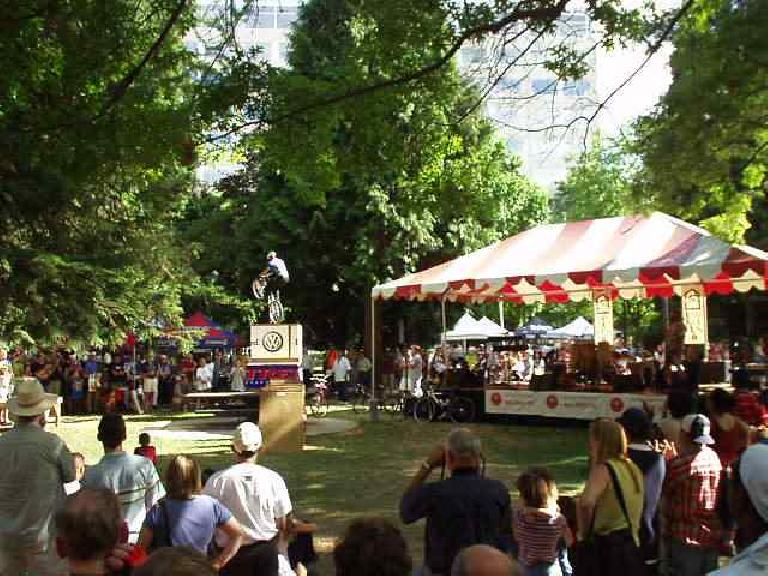 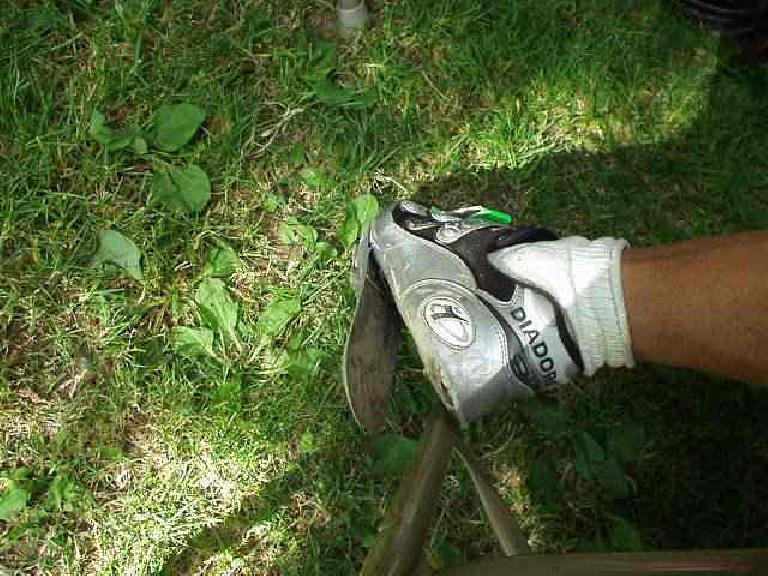 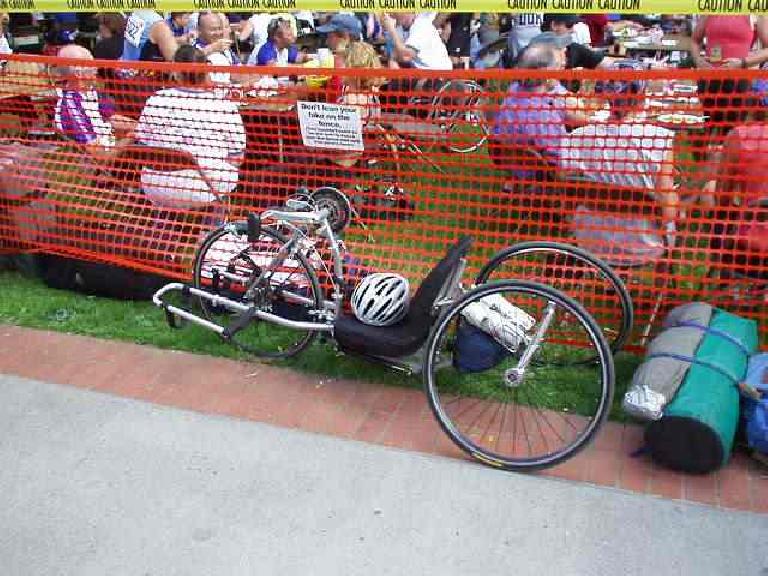 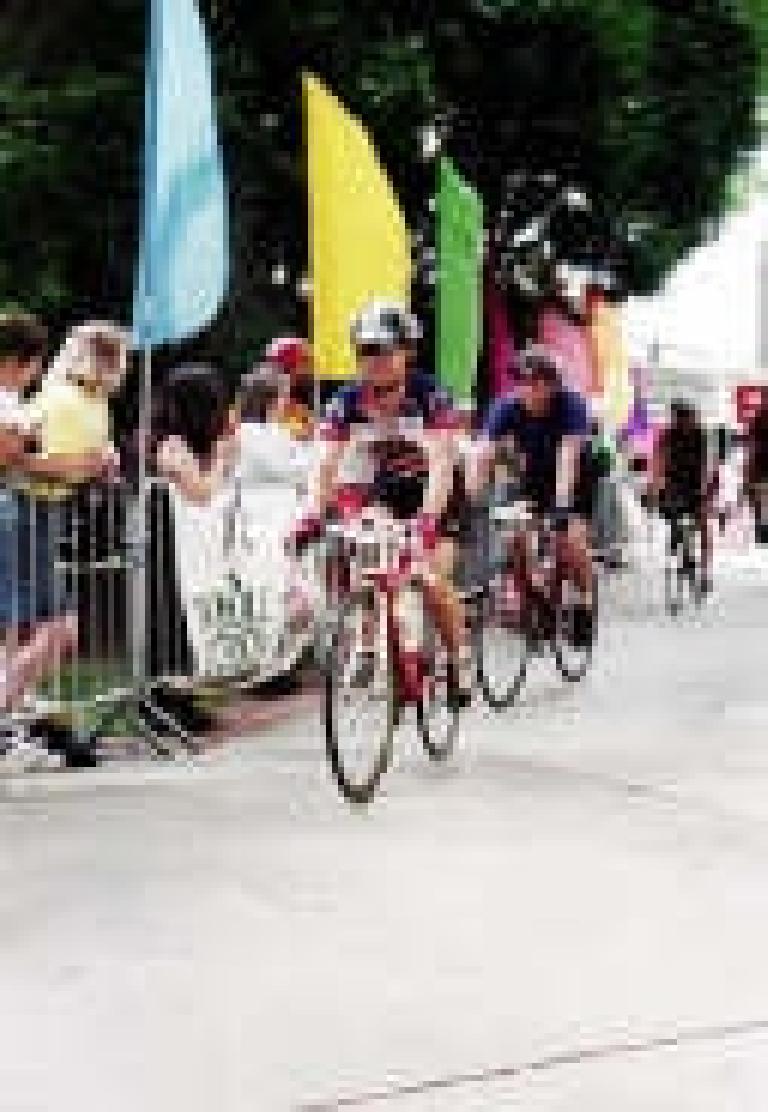 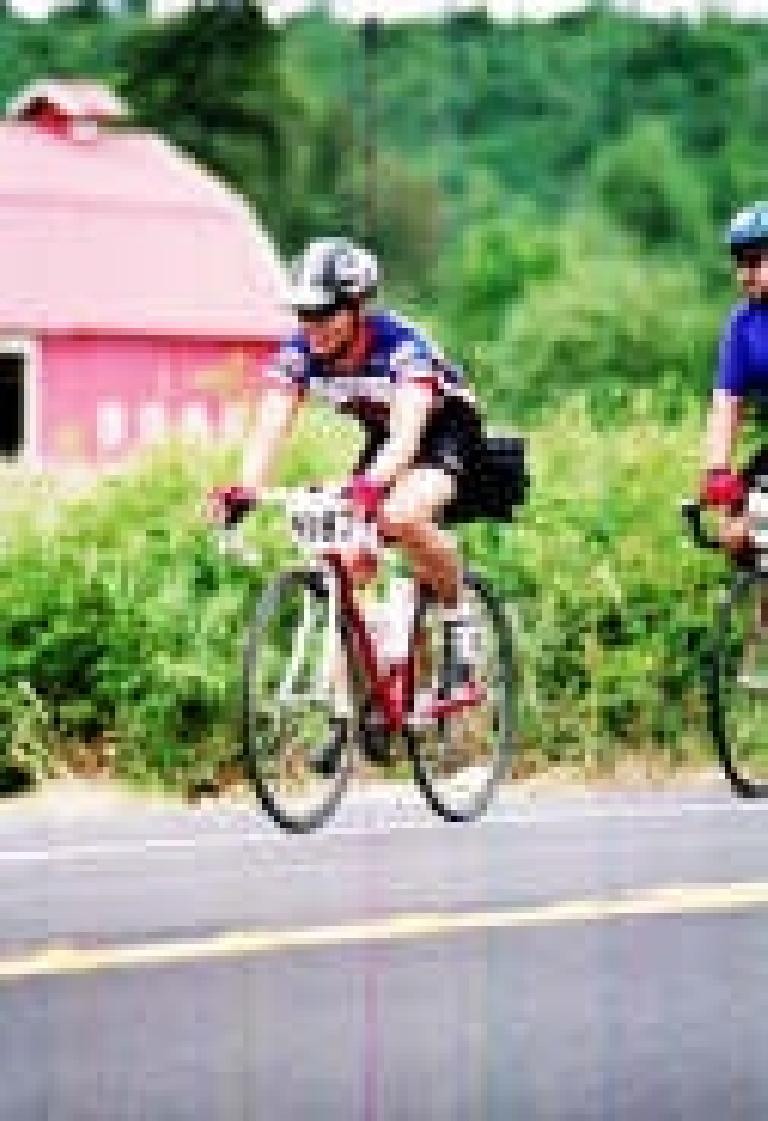 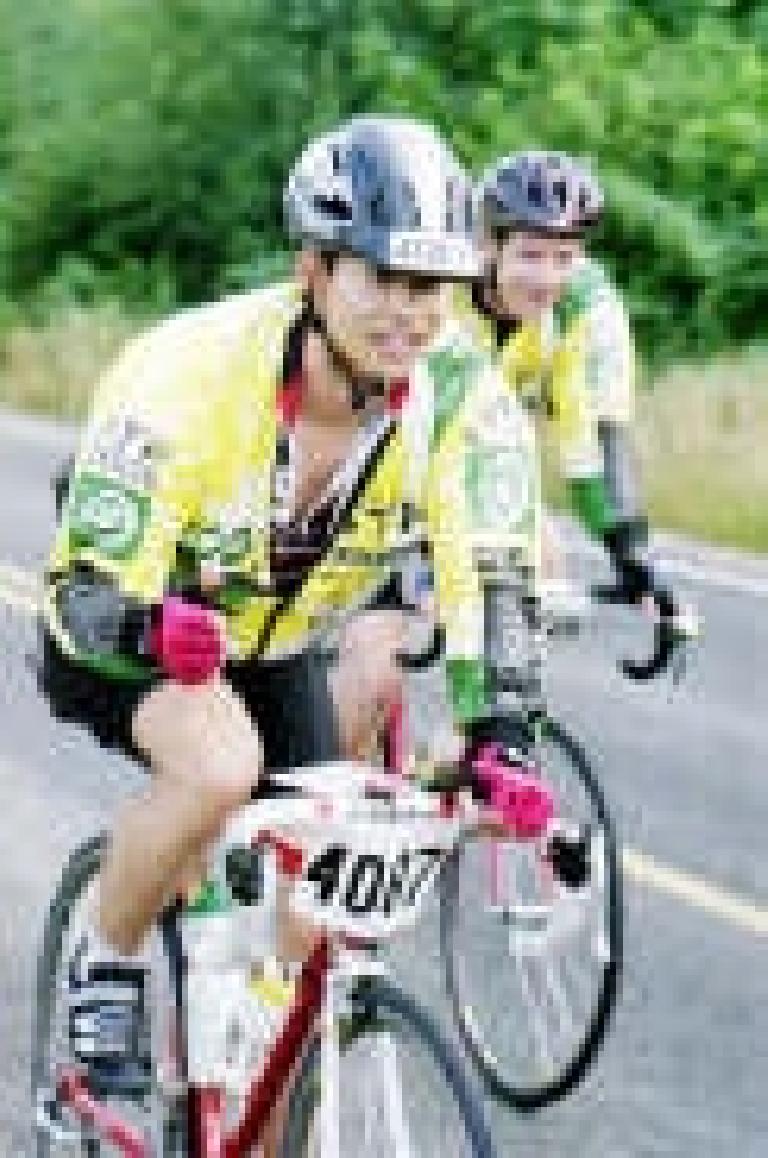