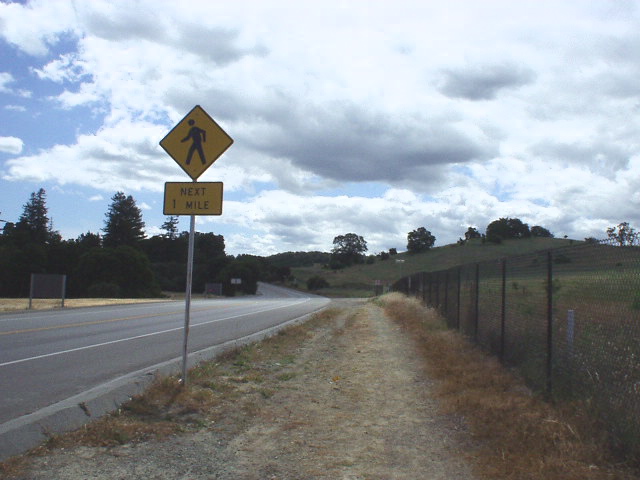 Stacey’s Run From Lam was a benefit run to help raise funds and awareness of the plight of my good friend, Stacey Collver, who had the rare lung disease lymphangioleiomyomatosis (LAM). The disease would have been terminal had she not gotten a successful lung transplant in 2005.

The run was on May 8th (Saturday). Thanks to all who sponsored the event; you helped save my friend!

The course started at my home in Fremont, went over to Lam Research (my employer, which is actually a semiconductor equipment manufacturer, but in this case, aptly named), then made a U-turn to go through Newark, over the Dumbarton Bridge above the SF Bay, into East Palo Alto, Palo Alto, Stanford, Los Altos, Mountain View, and finally, over to Stacey’s home. By design, the course is symbolic of what will be Stacey’s own journey: a quick encounter with LAM; a subsequent journey over “troubled waters” and into “troubled territory”; hope and encouragement provided by Stanford (where she will have her lung transplant); and a long road to recovery where she may sometimes feel near death, but will survive and, hopefully, thrive.

Per my randonneur roots, I did this run entirely self-supported—e.g., no support vehicles driving alongside while running, no organized aid stations—and was by far the longest distance I had ever attempted to run in a day. Before the event, I pleaded:

Please be a sponsor and offer support to Stacey though. This is the only reason for doing something as crazy as this (I don’t enjoy running that much, plus I have not been training!) Although your donation will not be tax-deductible (due to the lack of a full-time staff at the Wind Song Foundation, which is comprised solely of friends and family volunteering time), 100% of your donation will go towards Stacey’s medication, the numerous oxygen tanks she currently needs each day, medical bills, and lung transplant.

For more information about Stacey and her plight, see these newspaper articles and the website of the Wind Song Foundation. Thank you for your support and consideration.

Su-lyn and Greg came over at 10:00 a.m. to help me support Felix on his run. We drove from Mountain View to East Palo Alto and saw Felix at a stop sign. He was not even looking tired after 23 miles!

After 26.2 miles, (a full marathon distance)he was at Stanford University. From there he ran down Juniper Serra which turns into Foothill Expressway. He was looking a little tired at this point, so Su-lyn joined him for the last 12 miles because she had a cell phone and extra water with her in case of an emergency. At the 37.5 mile mark, Sharon met him on Castro street. With a new burst of energy, Felix speeded up and finished strong, arriving at my house at 2:40 p.m., just 8 hours and 35 minutes from when he started.

We celebrated with an indoor picnic, so Felix would not have to take any extra steps to the park across the street. He did not look too tired, though. He was smiling, lively and talkative throughout the meal. Is Felix a human, or is his body a machine?

Felix single-handedly got over 20 sponsors for his run, raising over $2000 for the Wind Song Foundation. Thank you, Felix! The run was a terrific success.

Felix’s response: What was amazing to me wasn’t the run but the number of friends who sent in a cummulative $2k in response to just ONE email I sent out, in order to help Stacey! Truly we live in a world filled with wonderful people contrary to all the bad stuff reported in the media. Thanks, all!