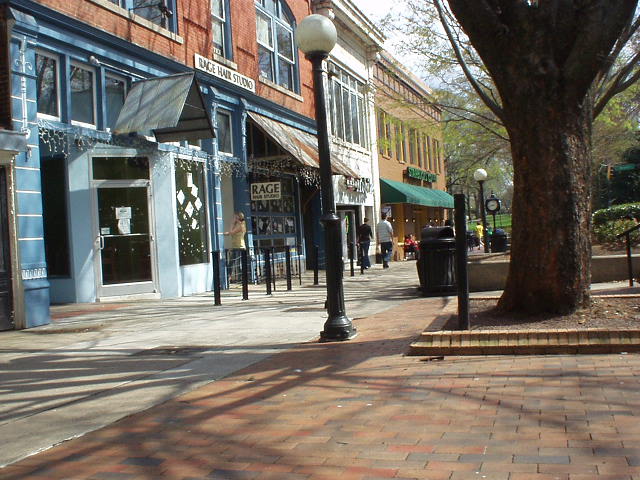 Athens is a youthful town of 100,000 60 miles east of Atlanta. The University of Georgia, one of the nation’s leading research institutions and one of the oldest state colleges in the nation, plays a prominent role in the economics and culture of the town as it makes up about 1/3rd of the jobs and most of the people traversing downtown are college students.

I drove over to Athens along with a gal I met in Atlanta who was both cute and friendly, and was also from the East Bay not too far from my home of Fremont. Being a photojournalism grad student at Cal, she was take photos of “life on roads named Martin Luther King Jr.” in various cities around the nation. She showed me a list of cities with roads named after the great reverend and I was quite astonished to see the number of cities easily ran into the hundreds if not thousands. Anyhow, while she was off shooting her photojournalism project I went around downtown, which I had heard so many great things about.

It did not disappoint. It, like the rest of the city, is amazingly clean with an eclectic mix of stately historical Southern buildings and modern shops. The atmosphere, much like Asheville, North Carolina, is very progressive. An occasional blue-haired young person would mix with a somewhat diverse (well, mostly white and black) populace, and signs on shop windows proudly proclaimed that liberals, gays, rednecks, democrats [etc.] were welcome. Cool.

A quick flip-through one of the free local activities guides showed that every night there was a lot going on, especially in the realm of live music. Indeed, many famous rock groups from the late 80s originated from here, including REM, the B2s, and the Indigo Girls. Original cafes and diners were prominent downtown. I had lunch at an excellent all-vegetarian restaurant (how many of those do you see around the U.S.?), and there were plenty of cheap, but good-and-friendly burrito, giro, and pizza joints catering to college students.

The heart of the city is clearly downtown near the campus, but there are nice homes all around. The closer one gets to downtown, the more historic/traditional the homes are. Around the outskirts of the city are new homes that nevertheless seem to have more character than the cookie-cutter, garage-dominated tract homes of the west. Housing out here is really inexpensive, too. Three-bedroom homes with a two car garage seemed to go well for under $200k at the time of this writing. Mansions with lake-front were in the mid-$300s.

The area is flat/rolling, with some mountains to the far northwest. Savannah, GA—perhaps the closest city to reach the Atlantic Ocean—is 225 miles away, and big-city Atlanta is just 60. Then again, I liked Athens a lot more than Atlanta. It is one of those select smaller (population around 100,000) cities with 95% of the advantages—including culture, restaurants, and things to do—of a big city, but without the big-city problems like out-of-control crime and traffic. I felt not only welcome here, but safe and very comfortable. I could live here; I loved this town!