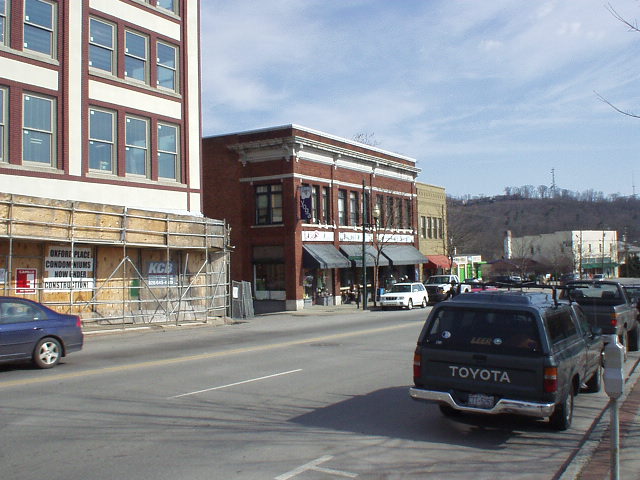 On Thursday (March 17) I awoke at Dan’s place in Durham only to see tiny snowflakes fluttering down from the sky. As the weather forecast for Ashville was a high of 39 with snow, I had some misgivings about the westerly drive of 210 miles, but it turned out not to be a problem at all. North Carolina highways, by and large, have much smoother roads and less traffic than California, and North Carolinans generally drive at a much saner, relaxed pace.

Below is a summary of my days here.

I arrived in the late afternoon at the Asheville Arthaus, a hostel that just opened up last July. Unfortunately, Rupa, the very amiable hostel owner, was out getting toilet paper, so I couldn’t check in until a couple of hours later, but this gave me a chance to walk downtown a bit. After I did check in I met many friendly people: Allison, a secondary school teacher from Australia, Franco, an electromechanical engineering student from Argentina, Jennie and Jessie, both from the University of Carolina at Chapel Hill on spring break. (“I was just at your university yesterday!” I remarked.) Later we’d go to Beanstreet, a cafe downtown that had an open mike session, with some people singing songs or reading poetry they wrote. Jesse, a stud who has his own rock band called Placid Trip, even borrowed a guitar and sang 3 of his songs for us. Franco and I also played a great (well, cute Jennie described it as “intense”) game of chess and practiced the ways to say “check” and “checkmate” in English and Spanish (the latter I promptly forgot so I cannot repeat it here). As we left the cafe someone was reading a poem about “the President misleading America.” All in all it was a very fun night and was a good introduction to the artsy and cosmopolitan downtown of Asheville.

Franco and I first attempted to drive by the Biltmore Estate, which is the largest home in the United States and is on 8,000 acres of land (used to occupy 11,000 acres). Not being interested in spending $35 to enter or to spend all of our limited time to tour the place, we tried to get a glimpse of it from I-40, but there were way too many trees in the way. (Asheville is very wooded much like Durham.) So we went north to the Grove Park Inn, which is a very posh resort and spa with a golf course and which I had hoped to visit its antique automobile museum. We found the museum with no problems but unfortunately it was closed! Still, there were lots of great views from the Grove Park Inn and many nice homes in the area in its vicinity.

We then headed downtown and went to have lunch at the most excellent Mexican restaurant I have ever been to: Salsas. Franco and I both had roasted chicken encampados that looked marvelous and tasted even better. But probably what made the biggest difference was the service. The waitress was so friendly and kept smiling at us. In fact, that seems to be something I have noticed out here in both Ashevillle and the Research Triangle–so many people, especially the women, look so happy! Their smiles can totally melt a guy’s soul (or at least mine!)

Then we walked around downtown, going through a couple of art galleries (they are all over downtown). Later in the evening we also stopped by the “French Broad Co-op”. In both the Research Triangle and Asheville there seems to be co-ops, yoga studios, and fliers and bumper stickers for some noble cause. This is a very progressive, liberal city, and I love it!

After all of this we still had a couple of hours to spare so Franco and I drove over to Chimney Rock, which is about 25 miles southeast of Asheville, driving on a very twisty road wending through pristine forestland. Franco was particularly impressed by the beauty out here. Unfortunately, Chimney Rock was closed by the time we got out there, but we could see it from the highway. We stopped off at a trail to go walking by the “Broad River” in front of Chimney Rock and took some pictures.

To end the night, I took Franco to the Greyhound bus station where he would commence a 16-hour bus ride to Florida. While waiting we continued to practice our English and Spanish and talked about visiting each other in our respective countries/places in the future. Within 24 hours, we had developed a very good friendship, and I am looking forward to visitng Franco in Resistencia in the future.

To say that I have good memories of Asheville would be an understatement. However, I realize a big part of this is because of the people I have met and hung out with in the last couple of days. These are the things I liked and disliked about Asheville: