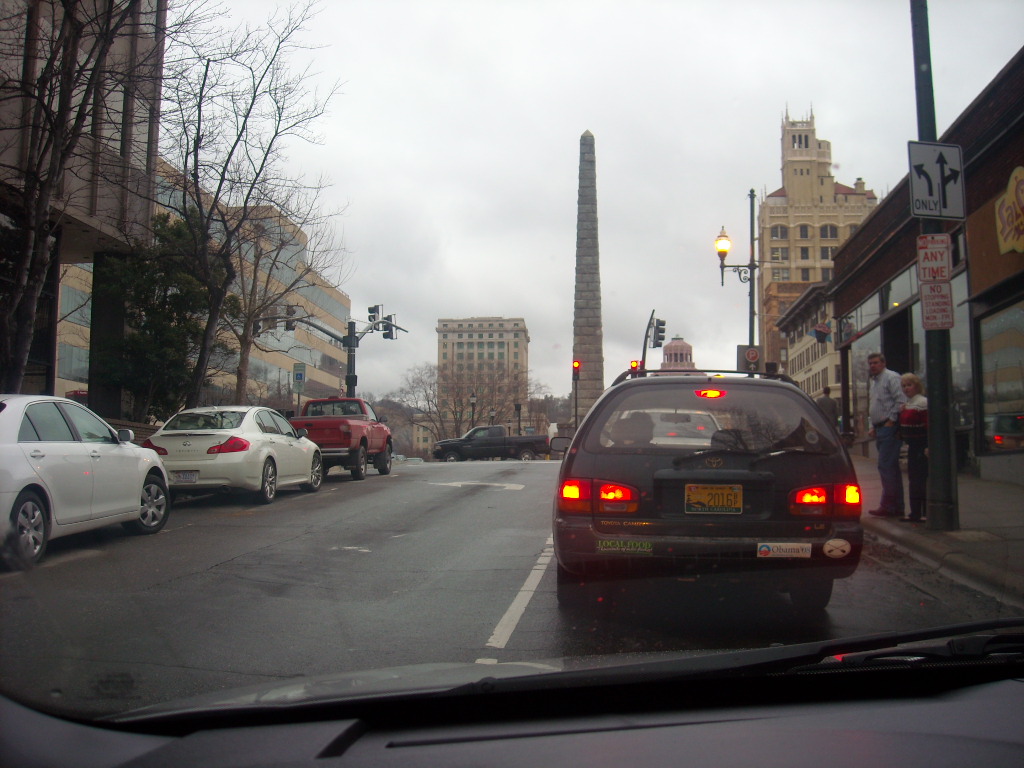 It was somewhat hard not to people-watch as I cruised down Biltmore Avenue in a Ford Focus. Crossing the street was a man sporting a beard shaggy enough to make a true mountain man burst with pride, although I wasn’t sure if it meshed well with his tie-dye shirt or the poodle that he was walking and wearing a sweater. On the sidewalk was a tall young man whose height was impressively augmented by the 8″ spikes fashioned from his dark hair and, presumably, a few cans of hairspray.

“Ah yes,” I muttered to myself. “I’m definitely in Asheville.”

I hadn’t been to Asheville in five years but for some reason it felt instantly familiar. I guess I had fond memories of the town from the week I spent there in 2005. Or perhaps it was the inner progressive in me. Everything from the French Broad Co-Op to the yoga studios to the funky restaurants made me feel right at home.

In fact, after doing my Great American Road Trip in ’05 and trying to decide where to live, Asheville ultimately made my Top 3 along with Bend, Oregon and (of course) Fort Collins, Colorado. In addition to its vibrant downtown I was especially captivated by the area, with the Appalachians, Great Smokies and Blue Ridge Parkway nearby and the Southern hospitality. At the time, I even thought that if it was closer to the West Coast (where I still had family and many friends) with an international airport, it might have ranked higher in my decision making process.

So it was intriguing to revisit the area during a marathon mania trip which included the Snickers Marathon and Ellerbe Springs Marathon. I thought Asheville would be a good place to hole up, recover and do some work in the week between marathons while my buddy Dan (who was doing the marathons too) would also be busy with work at his place of employment in Charlotte.

How, then, did I feel about Asheville after this second visit? It’s still a charming place, but my impressions this time around were a little different.

The first thing I noticed about the town—and actually, most of the South—was a distinct lack of shoulders and bike lanes. I guess I’ve been spoiled by the excellent bicycling infrastructure in Fort Collins (a gold level bicycle-friendly community according to the League of American Wheelmen), where roads are wide, bicycle routes are plentiful and a new dedicated recreation trail seems to be constructed each year.

In any case, it was hard to imagine bicycling in Asheville without having stress-induced elevated blood pressure at times. In addition to no shoulders and narrow roads, Asheville is hilly. I witnessed a couple lycra-clad cyclists navigate the roads and the way they would ride is they’d hog up an entire car lane even if it meant slowing cars behind to seven miles per hour as they moseyed up a grade. It was the only safe way to ride.

For the same reasons, jogging through the city can be stressful. I know because I tried running on Tuesday, Thursday and Friday. Running by Beaver Lake wasn’t too bad because there was a recreation trail alongside for about a mile—never mind the noisy and narrow road right by it—but elsewhere was more challenging. Even on some of the less-traveled roads, I had to jump off the pavement and into the bushes at times to allow cars plenty of passing space. Many roads do not have sidewalks.

Other impressions included the older look and feel of Asheville; e.g., exposed power lines everywhere and the demographic median age of 39. I also couldn’t help but notice Southerner’s bulging waistlines, but then again I come from Fort Collins—recently proclaimed the least obese city in America –and it is a matter of what one is accustomed to seeing.

But if I had to redo my city rankings, I would drop Asheville a little lower. My heart remains in the West, more so than ever.

Nevertheless, Asheville remains a picturesque mountain town that I would love to return to—particularly to drive the Blue Ridge Parkway and explore more of the mountains and Great Smokies. I can foresee doing a motorcycle tour around those parts sometime in the distant future, or maybe another marathon.