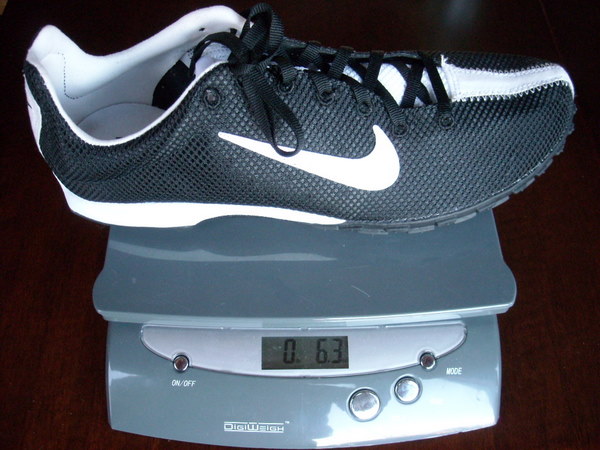 As I reported in January, it was time for me to get new shoes since my Puma H-Streets and Salohs both had around 1000 miles on them, and the former suffered a two-inch tear in Oaxaca. I also wanted a shoe that had the same “barefoot” feel but had better traction in mud and snow, was less expensive than (for example) an iPod Nano, and would be available for an eternity—unlike the Puma H-Streets and Salohs which have been both discontinued.

The Nike Zoom Waffle Racer VIIs—made by the company co-founded by legendary coach Bill Bowerman—seemed to fit the bill. I know two people (now in their 40s) who were using Nike Waffle Racers for high school cross-country meets more than two decades ago. Now on its seventh iteration, the Waffle Racer’s tread is a little different from the originals but the shoes remain true to its heritage of being a light-weight flat with good traction for off-road running. They even accept spikes.

At an MSRP of $55, they don’t require a huge slush fund for shoes and are reputed to last a long time. Of course, more important than their cost is how they feel and how they perform, and having already put 132 miles on them at the time of this writing, I can report positively about the latter.

Upon receiving and weighing them, I was shocked to see that each shoe in size 9.5 weigh only 6.3 ounces. This is only 0.5 ounces more than the Puma H-Streets and 0.4 ounces less than the Puma Salohs. I was amazed they were lighter than the Salohs despite having significantly better tread from cross-country conditions.

The Waffle Racers feel like the H-Streets and Salohs too, with a thin heel, high flexibility and virtually non-existent support or cushioning. The main difference is that the Waffle Racers are narrower in the toe box. I have feet that are of average or maybe slightly less-than-average width, so I’d think these shoes would be unsuitable for anyone with wide feet. At first I was concerned that it would be a problem for myself, but long runs of 13 and 17 miles in these shoes allayed these concerns as they resulted in no blisters or hot spots.

I plan on doing all trail races—including some ultras—in these shoes this year, so I may have more to report then.

March 13, 2010: Now I know why these shoes are so light: the fabric doesn’t last very long. After less than 137 miles, the shoes already have holes in the fabric near the little toe area on both shoes. One-hundred thirty-seven miles really is not very much, especially compared to the Pumas which I was easily getting 700-1000 miles from.

On this basis alone, I don’t think I can recommend these shoes as anything but for racing and as a sporadic winter training shoe. I’ll be looking for alternatives again.

April 24, 2010: Ok, these shoes aren’t durable at all. Not only is the fabric weak, but so are the seams. Both of my shoes (the left and right ones) became unglued at their inner seams after only 10 miles of the muddy Free State 100km Trail Race. I had to run the final 50 miles of that race with gaping holes in the shoes.

Have you looked at the New Balance MT100s? They are supposed to be a lightweight and durable minimalist trail shoe. I would get them but still have several pairs of their precursor, the NB 790's which are also minimalistic and amazingly durable (800 miles so far on my oldest pair). I did one marathon in them and countless long runs. They are great on both trail and pavement. I think the MT100's should follow suit. ↩Reply

I tried out the Puma Street Kosmos - brought them home for some testing. They weigh about 7.8 oz each and there's a lot more fabric around the heel and along the laces and tongue. There's so much fabric at the bottom of the heel that it feels close to a stiff plastic and acts as somewhat of a stabilizer. They seem less flexible than the Saloh's around the mid-area to the back to the heel, but probably have better breathability all around (probably not a serious issue after being broken in). The heavy stiff fabric on the heel seems to promote running on the heel - or at least make it more feasible - but for the trained Posetech runner, these are still a good quality running flat. Hopefully Puma's trend toward heavier and more casual ancestors of the H Street reverses! ↩Reply

I'm looking at the Nike Waffle Racers right now and it seems as if they made the fabric sturdier: http://www.runningwarehouse.com/descpageMRS-NWR7PB.html

Notice the extra fabric overlaying the mesh. I would say give these pair of shoes another try! The durability problem may yet be solved... ↩Reply