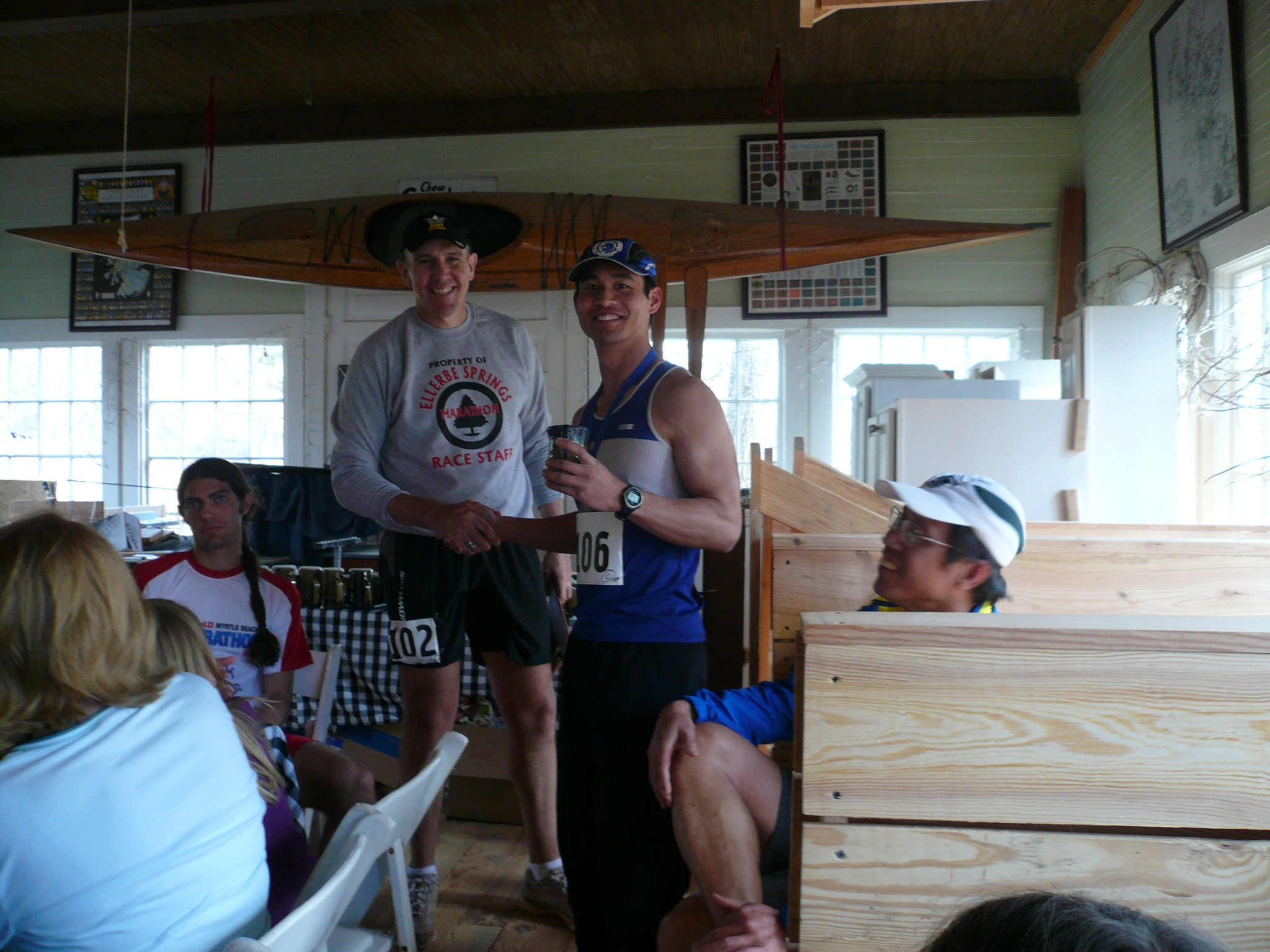 “The Ellerbe Marathon,” said my buddy Dan, “is my favorite marathon.”

Considering that Dan has run something like 32 marathons (this number seems to be going up literally by the week), that’s speaking volumes. I guess he also puts his money where his mouth is because the 2010 edition was the fifth year in a row he ran the race. He even managed to convinced me to enter the marathon even though Ellerbe is smack dab in the middle of nowhere in North Carolina and the course was reputed to be hilly, as in “there are virtually no flat sections in the race.”

My legs weren’t totally recovered from the previous weekend’s Snickers Marathon, but at the starting area I was pleased to note that my calves felt “good” (i.e., not sore) for the first time in seven days. Secretly, I was gunning for a top 10 finish being buoyed by last year’s results, in which the winner (a woman) finished in 3:20 and change. (At Snickers, I ran 3:11.) Failing that, I was hoping for at least an age group award.

Scoping out and overhearing other racers at the start line, however, it seemed like many other people had the same idea. “I saw last year’s times,” a runner next to me declared, “which made me decide to come this year. I figured, I could do pretty well!”

The hills and the enhanced competition made for an interesting race. It went like this:

Mile 1: Seventh place. The pace of the frontrunners was a bit faster than I wanted to go at this point so I let them go.

Miles 4-13: I was intent on maintaining a constant breathing intensity, even if that meant going slower than the nearest competitors on the uphills and blowing by them on the flats. This meant I was alternating 11th-14th place with other racers like a yo-yo until the midway point, when the longest uphill of the race came and I got dropped.

Mile 14-18: Kept the trio I was yo-yo-ing positions with in sight, and one of them was beginning to falter which temporarily gave me hope I’d catch him. However, I was falling apart too!

Miles 19-22: A few other men behind caught me. I was now struggling, having bonked with 10k to go. My usually indestructible feet also were getting blisters, probably due to the way I was hauling down the descents. At Mile 22, I had virtually thrown in the towel and given up on any hope for a top 15 or even top 20 finish—now I just wanted to finish without having to resort to walking. In another mile or so my pace slowed to 10-minute/mile pace.

Mile 23: The first woman whizzed by me.

Mile 24: A second woman caught me.

Mile 26: The course crested a couple more hills before making a sharp hairpin turn, in which I could whether there was anyone within sight behind me. No one. So I cruised in the last mile and didn’t even do my customary frenzied 150-meter final sprint. I was just happy to be done.

The second half took me 21 minutes more than the first half. Clearly, the race was not one of my more consistent efforts.

So a few minutes after I crossed the finish line, I was very surprised to learn I did manage to get an age group award after all: third place! For that, I got a mug.

And Dan did successfully finish the race for the fifth year in a row, which earned him a long-sleeved sweatshirt that said “5 Year Finisher” on one of the sleeves. The race staff also provided us with a heart-warming Southern-style post-race meal of chicken and dumplings, biscuits, apple cinnamon tea and dessert. We ate this while reminiscing over how this was a well-run race with an intimate feel and beautiful, rural roads.

In other words, I could see how the race could be Dan’s favorite.