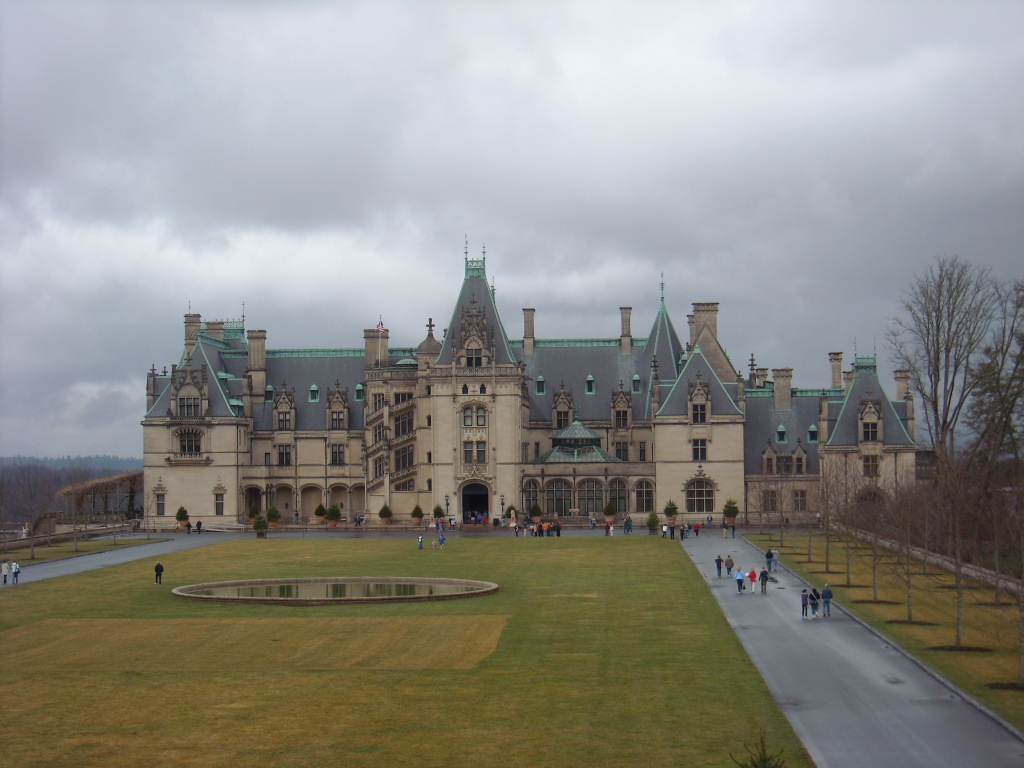 Normally I wouldn’t shell out two Andrew Jacksons to take a stroll through a stranger’s house—especially if its owner was a railroad magnate who was nowhere nearly as popular as Elvis and was deceased well before The King was even born. But George Washington Vanderbilt II’s Biltmore House is the largest private home not only in Asheville, but the entire United States. Besides, I was able to pick up a discounted ticket at a nearby Ingles grocery store for $33 and I was somewhat curious as to how the obscenely wealthy lived at the turn of the 20th century. So I did a two-hour self-guided tour of the Biltmore Estate after all.

The estate is just a few miles from Asheville’s downtown, but the Biltmore House could vie for having “the world’s longest driveway” as it sits on 8,000 acres of land. While this may seem like a lot, the estate originally consisted of 125,000 acres. After Vanderbilt’s death, two-thirds were sold to the United States Forest Service to comprise the Pisgah National Forest—the first professionally managed forest in the U.S.—and additional land was sold as finances for the estate and heirs demanded.

Surrounding the house are well manicured gardens that surely require the attention of an entire army of workers wielding shears. Vanderbilt’s intention was to have the estate be entirely self-sustaining, so many of the gardens bore fruit and vegetables. In open spaces around the property, one can enjoy panoramic views of western North Carolina’s gorgeous mountains, and despite the proximity to downtown Asheville, a visitor gets the feeling he is hundreds of miles away from the hustle and bustle of the city.

The home itself is inspired by French chateaus, and the interior appointments and furnishings are of the French Renaissance style. Despite my love of France, elaborate and ornate decor isn’t really my cup of tea as I’m more of a devotee of contemporary design featuring simplistic lines and emphasis on shape, color and texture. Hence, the antique furniture with their complex carvings and the busy wallpapers with their frivolous flairs were a turn-off to me, but it did give a sense of what was popular among the upper class a century ago.

My discomfort in the house, however, only increased as the tour progressed. From the echos bouncing off the walls a football field away, to the seemingly midget-sized beds (“an optical illusion,” proclaimed a tour guide) and Spartan maids quarters, to the sheer vastness of the house that surely necessitated producing maps for guests —I simply could not imagine living here.

What was particularly mind-boggling was that for the first few years after Biltmore’s completion, Vanderbilt was single and unmarried making this the world’s largest bachelor pad. In essence, there were 250 rooms for one person! Of course, this is not strictly true as one floor of the home housed his staff of maids, cooks, and assistants. Also, he often threw lavish parties. Clearly this was a man whose idea of a good-sized fiesta did not mean “enough people to fill a kitchen” as mine tend to be.

The Biltmore House actually has multiple kitchens. It also has a fitness room which had weights and rowing machines; a 70,000 indoor swimming pool; 40 bathrooms with what looked like flushing toilets; and a bowling alley. The two-story library consists of 10,000 books written in the eight languages Vanderbilt was fluent in; a New York Journalist called Vanderbilt “the best read man in the country.”

Perhaps Vanderbilt never wanted to leave his estate so he needed all this stuff inside. In any case, I imagine a stayover at his house was more like visiting a college campus (minus the students) than a home.

The estate opened to the public in 1930 to help stimulate the regional Depression-driven economy, and today employs more than 2,000 people for its maintenance and restoration. The latter helps explain the $40 entry cost. “Biltmore exists not for a profit,” to paraphrase one of Vanderbilt’s heirs, “but a profit is necessary for Biltmore to exist.”

The house does have over one million paying visitors per year, so I suppose the Biltmore House will indeed exist for a while.

(Note: photography was not permitted inside the house, so I have no pictures of the interior. However, if you are interested you can look at these photos courtesy of Google Images.)