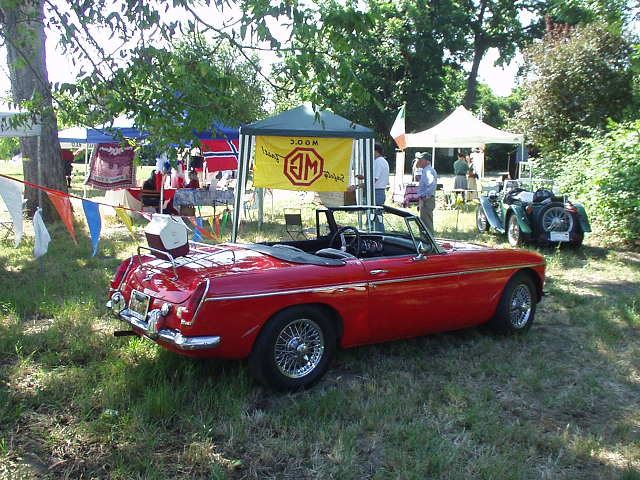 For the second year in a row, the MG Owners’ Club was invited to show its members cars at the Ardenwood Celtic Festival in my hometown of Fremont. Several members of the Sorry Safari Touring Club also participated, and there was a good diversity of sports cars displayed. There were a dozen cars which included an MG PA, 2 MG TDs, an MGA, 4 MGB roadsters, a B/GT, an MG Midget, a Jaguar E-Type and a Morgan Plus 4 (I think).

The day started out fairly chaotically for several members due to a number of car maladies. For my part, in the midst of the 8-mile drive over to the Ardenwood Historic Farms from home, my MGB’s engine completely cut out as I was cruising along on a city street. Fortunately, as I was going 45 mph, I was able to put the car in neutral and coast all the way through a green light and into a gas station parking lot. A quick peek underneath the bonnet revealed that the 12-volt distributor lead had completely separated from its terminal lug. Not having a pocket knife handy, I managed to remove some insulation from the lead with pliers and then poke the exposed wires into a hole in the terminal spade on the distributor. 2 minutes later I was back on the road.

Shortly after I arrived at the farms and parked my car in the designated “British Car Show grass field”, there was David Wright poking underneath the bonnet of his white Jaguar E-type. Apparently, its massive inline-6 was running a bit hot while wending around the farm grounds. Not finding any perceptable coolant leaks, he concluded that the car was just running hot due to the extended period of time crawling along at near-walking speed, sometimes off-road.

Meanwhile, Dennis Cox, the owner of a British Racing Green MGB roadster noted that his battery was not being charged as he drove on over. “Does anyone have a spare alternator?” asked Dan Shockey, who was trying to help the guy. I offered my spare battery pack to charge up the battery during the show and also help start the car afterwards, but ultimately Dennis left with Chuck Blakeslee in a red MGB to fetch a new alternator from O’Connor Classics in Santa Clara.

About 10 minutes later Andy Moyce, the owner of a red MG TD, discovered that a certain piece had broken off of either his distributor or distributor cap (I’m unsure what exactly it was). He then busted out his cell phone, talked with the guys at O’Connor Classics, and requested that a new part be sent down with the two guys who were on their way up to fetch the alternator!

As they were awaiting the new parts, I wandered around the historic farm. One benefit of showing the cars was free entry into the Celtic Festival (a savings of $10), so I checked out some of the exhibits, live Irish music, and merchandise. One of the exhibits I found particularly interesting was that of the Gaelic Athletic Association, which represented amateur athletes who played gaelic football. This sport was, according to its public relations officer, “a cross between soccer and basketball,” although while watching a game played on an iBook laptop, I thought it looked more like a cross between lacrosse and American football (with its similar-looking goal posts). Apparently, there are 17 or so Bay Area teams which actually play this obscure sport!

For lunch I passed on the Fish ‘n’ Chips and British Bangers for a tasty box of chicken and potato salad. Then I read a newspaper and finished reading a book. In the midst of reading the latter, I actually fell asleep for about 20 minutes. Upon waking up, it appeared I had been transported back to the 15th century because just about 10 feet in front of my eyes were a number of guys in medieval costumes sword fighting rather spiritedly for an audience that seemed to consist solely of myself.

After convincing myself that, yes, I had not been kidnapped and put into a time machine, I walked back over to the car show and Dan informed me that while I was napping all of the parts from O’Connor Classics had arrived and the two cars were fixed already. Not bad for a couple hours work in a grassy field at a car show. Furthermore, a Midget had apparently come and gone while I was having lunch, reading and sleeping. I will have to stay awake next time so I do not miss these things!

All in all it was a fun event. Several people were able to depart at 3:00 while a number of us stuck around until 4:00 to help take down Dan’s MGOC canopy. Amazingly, Dan was able to stuff the entire disassembled canopy, 2 folding chairs, several flags and other materials into his diminutive MG PA, which doesn’t even have a trunk! Who says old MGs are not practical?

Who would have guessed a Celtic Festival had such a great fast car exhibit?... ↩ Reply