I’m not exactly sure how the seed was planted, but for at least a decade a lifeboat of wonderment floated along listlessly in the deeper canals of my mind: how did it feel, exactly, to fly (or hover, or fall) above the earth like a bird, an insect, or Ralph in The Greatest American Hero? And hence, for my 30th birthday, I fully intended to find out.

The idea was simple: to leap out of a perfectly functional airplane above 3000 meters. I’d gather an entire group of friends to do it, and together we’d comprise a whole flock of thrill-seeking, dare-devil stuntjumpers exhibiting what some of the older geisers might dismiss as “clinically juvenile behavior.”

So I sent out a short, simple email describing the plan to, oh, 50 of my friends, about half of which were rock climbers with no concept of acrophobia. Done deal, I thought. It’s not like skydiving is a new sport; people do it all the time. It has proven to be reasonably safe, at least as safe as getting behind the wheel of a modern monstrosity capable of going from 0-60 in 6 or so seconds…

It turns out the reaction was a bit more mixed than I anticipated:

“Sorry, I see NO REASON to jump out of a perfectly good airplane.” (Obviously from one of my more clear-thinking friends.)

“Um, I’m gonna have to pass. I’m not quite that adventurous, and my fear of airplanes doesn’t help!”

“I’m definitely not brave enough to do this!”

“NO WAY I’m jumping out of a perfectly good plane! I may consider going to watch though ;)”

Actually, now that I am reviewing all the replies, the responses were not mixed at all. EVERYONE thought the idea was frickin’ nuts!

The lone exception was my friend Cherie. Hooray! I would not have to do this alone. In addition, Cherie’s co-worker Pando had some recommendations for where to go skydiving. One of them was Lodi, very near where I grew up. Perfect.

“We can pretend we are Batman!” I wrote Cherie.

“Oooh, does that mean I have to be Robin?” she replied.

“Well, you can be Catwoman, as she has 9 lives,” I wrote back. “In contrast, I think Robin died in Batman & Robin…”

And just like that, a couple of days later Batman and Catwoman were off towards the self-proclaimed Zinfandel Capital of the world, sans Joker, ready to exercise their superhero powers.

At the Parachute Center in Lodi

The day started out gray and overcast in the Bay Area, but by the time we had crested the Altamont Pass near Livermore, the sun was shining in all its glory, with just a few puffy white clouds dangling below a clear blue sky. By the time we arrived in north Lodi (technically, the small town of Acampo), the air temperatures hinted that the promised high temperatures of 85 degrees would be reached in just a matter of hours.

But this was of little concern to us since we had arrived at 9:15 a.m. or so. We walked into the Parachute Center, which looked like a large tin warehouse, or perhaps a formerly abandoned airplane hangar, that was filled with sofas, dozens of people, and of course, parachutes.

Within minutes we had paid our fees ($100 for the jump at 13,000 feet and $35 for a VHS video) and handed a waiver that was a single piece of paper but nevertheless had about 500,000 lines to initial, including our promise not to sue the Parachute Center’s owners, our tandem partner, the airplane pilot, Charles Lindberg, George Washington, the Red Baron, et al.

Then we were told to plop ourselves down on one of the multitude of sofas and watch a video on an 18″ TV. The video must have been made about 25 years ago. I say this because 1) the speaker on it had a haircut and beard that looked like it seemed to be a cross between Bin Laden’s and one of the Fab 5’s, and 2) this speaker went on to proclaim how “tandem jumping was still in an ‘experimental phase’ which was the only way it could be legal under the FAA’s rules.”

“Funny, my math teacher did this back in 1989,” I said to Cherie. “Hopefully in the last 16 years this is no longer considered ‘experimental’…”

Then the speaker went on to emphatically point out that, yes, one COULD DIE during this. As if this point wasn’t clear enough, an ambulance was shown racing to an accident scene where, unfortunately, a parachuter did not quite make it. What exactly happened here?

Don’t ask me, because at that point the staff of the Parachute Center decided that watching the rest of this “safety video” was completely unimportant, and we were instructed to go out back and to meet our tandem partners. “They will tell you everything you need to know,” we were assured.

I ended up getting a lively gray-haired tandem master named Mike, while Cherie’s was decidedly more quiet, and whom I will call “Brad” because much to the delight of Cherie, he was young, buff, and prancing around the Parachute Center with no shirt on.

I opted to put on a jumpsuit if only to feel like a “real” skydiver and to offer me more protection, as if those overalls were going to offer much in the event that the parachute did not open and I went “splat” right into the ground. “Ha ha, you look like a mechanic!” observed Cherie.

While Cherie mocked my sense of fashion, Mike was trying to give me instructions. “Remember,” he said, looking me straight in the eye. “Remember to kick me in the butt. That’s right”—as he proceeded to kick himself in the butt by flexing his legs behind him—“KICK ME IN THE BUTT.”

Mike and “Brad” then helped Cherie and I put on our harnesses and we were then instructed to board a little trailer, which was towed by a little golf cart driven by a nine-year-old, and had an eerie resemblance to a safari vehicle, but with much less glass.

A few minutes later, it was time to board our plane! “Please, please, DO NOT hit your head on the plane when you board,” reminded Mike at least half-a-dozen times. Heeding the warning and not wanting to knock ourselves out before jumping out of the plane, we ducked and did our best limbo dance.

On the plane, and the jump

In addition to Cherie and I and our tandem partners, there were cameramen (one assigned to each of us) and a whole lot of other (mainly, solo) jumpers. In all there were about 15 of us seated lengthwise along the fore-aft axis of the plane, facing rearward and straddling one of two benches between our legs. The cabin only was wide enough for two people abreast, approximately, so there were about seven or eight people straddling each of these benches. This plane—don’t ask me how old it was—was rather noisy but it did indeed seem to be perfectly functional, and soon we were taking off to the altitude of 13,000 feet.

Mike continued to give me some instructions all while directing my eyes towards a few landmarks below. “There’s the Parachute Center,” he pointed out. “There’s Sacramento! And there’s Mt. Diablo.”

The next thing I know, someone had slid open the rear airplane door and Mike was putting a pair of clear googles over my head. Then, very casually, people started *falling out of the plane*!

Mike nudged me forward. In two seconds we were at the door. My arms were crossed as he instructed me to do, and his left hand was pressing against my forehead, presumably to prevent me from looking down and freaking out. Whatever the case, it worked.

It turns out my cameraman was already hanging out the door, and at that moment he let go. On cue, Mike pushed off. The plane was now entirely above us and ascending rapidly. Or wait… we were falling!

It actually did not feel like it. As we flipped over in a prone position, arms to the side and bent at the elbows in a 90 degree angle as Mike and feet behind me “kicking Mike in the butt” (who was on my back), it felt more like we were flying. Surreal. Only about 3 feet in front of us but yet freefalling at the same rate was the camera man, taking video and shouting some things at me. “Grab on to my arms!” he said, which I did, ostensibly for filming purposes.

The free-fall lasted for about a minute, but the primary indicator that, yes, we were falling at a speed of up to 120 mph was the wind rushing through our hair, turning a neatly coifed head of hair into a Don King-inspired hairdo. Then, instead of being in the prone position, I was gently nudged into a more upright position. Mike had opened the parachute! It was not the violent jerk I was expecting, but rather, a gradual easing of speed.

Mike showed me the “controls”, which comprised of two loops (left and right). By pulling down on the left loop, one could induce a left turn (I think); the right one, a right turn. Pulling both of them down (again, if I remember correctly), would induce a quicker rate of descent. Cool.

“We’ll do a couple of fast loops here in a bit,” Mike warned. “How’s your stomach doing?”

A minute later, Mike instigated the double loop. “That was about 3g’s right there,” he said.

Down below were the distinct outlines of green-and-brown aggie land, cleanly cut by straight strips of stone-gray pavement shooting across the plains in an orderly, if not quit parallel or perpendicular fashion. Just farther east was one strip of pavement right next to the Parachute Center, with cars traversing across it at speeds of up to 80 mph. It was called Highway 99, and it looked like we were momentarily going to land right on it.

Not! Mike deftly swung us around and instructed me to kick my legs straight out in front of me. Like an airplane touching down, we then came down into a grassy field almost horizontally, sliding on our butts and very low impact. Mike, who was wearing shorts, did not seem even the least bit scraped up or unruffled. It was a one heckuva smooth landing.

Suddenly, the cameraman was right in front of me. “How did it feel?” he asked, videocamera still rolling.

“Would you do it again?”

Well, probably not. While the experience was indeed a thrill, and certainly something worth doing once in a lifetime, I could imagine that doing it another time would merely feel repetitious, a “been there done that” experience. Ralph of the Greatest American Hero ultimately preferred the land to the sky. And even Batman and Catwoman know it is best not to push one’s luck. 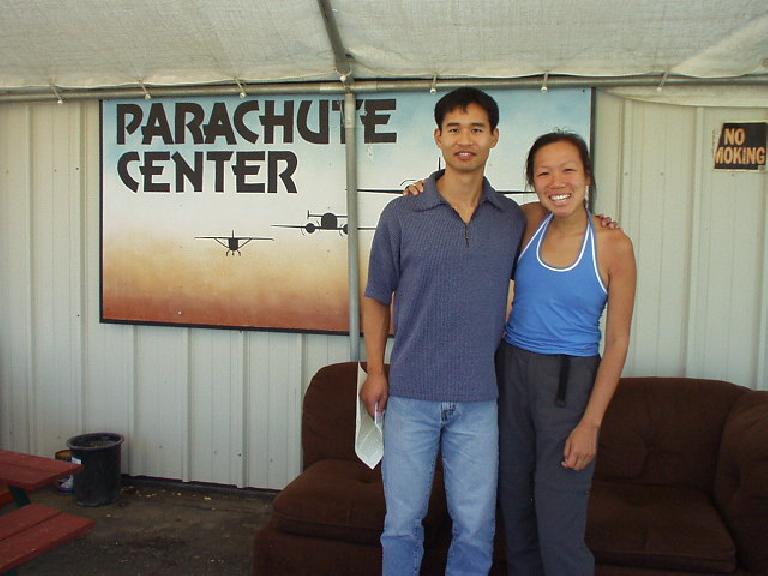 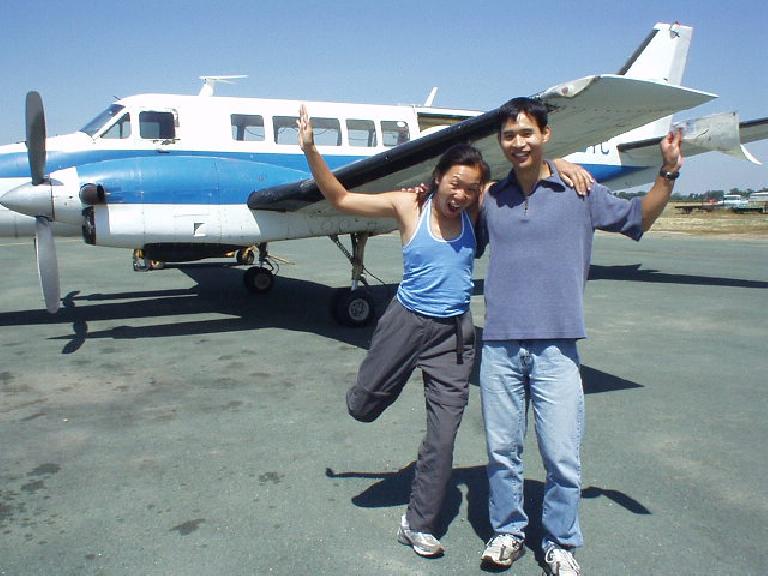 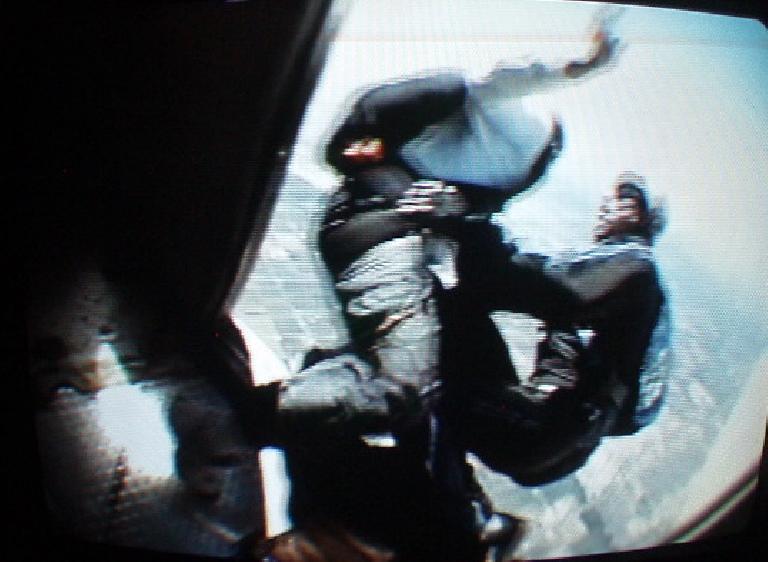 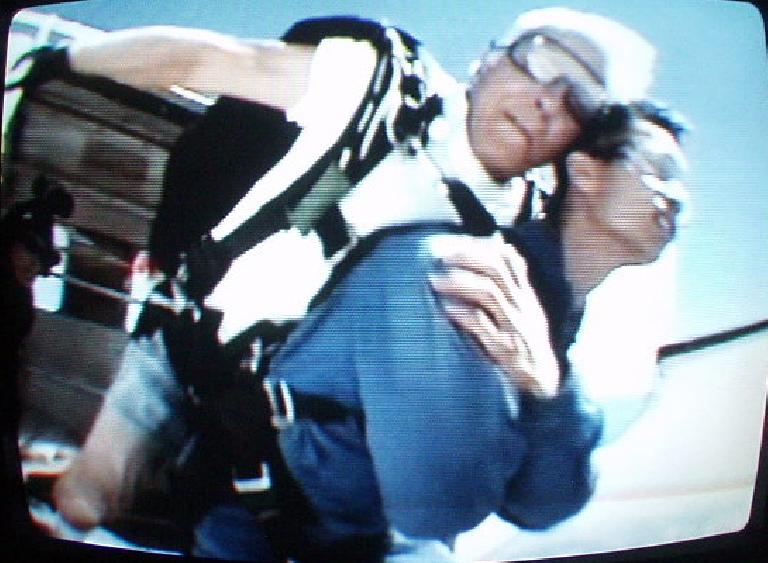 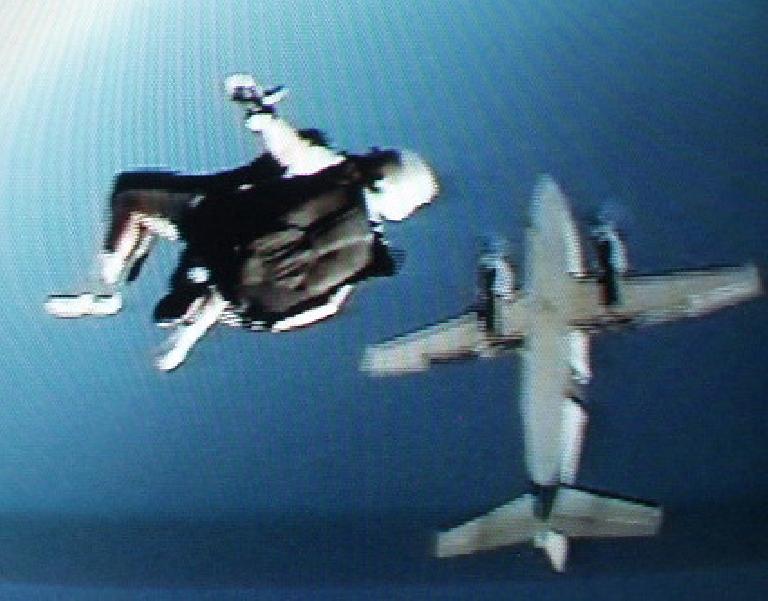 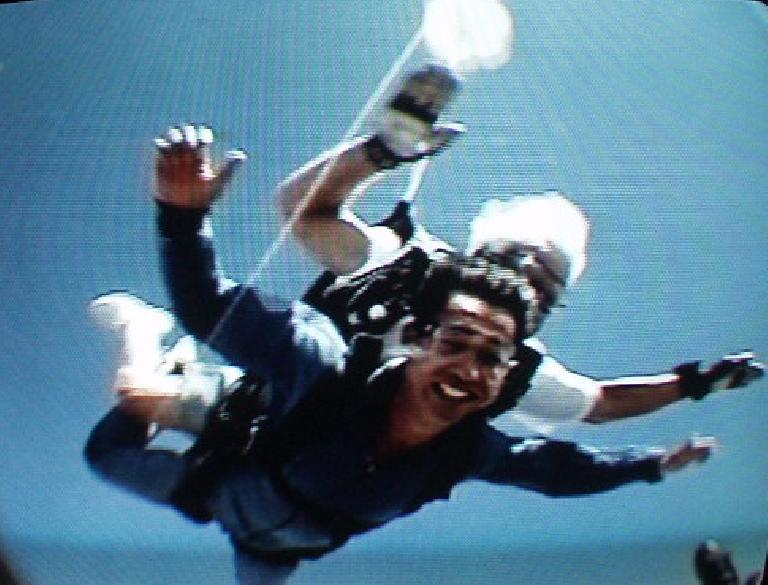 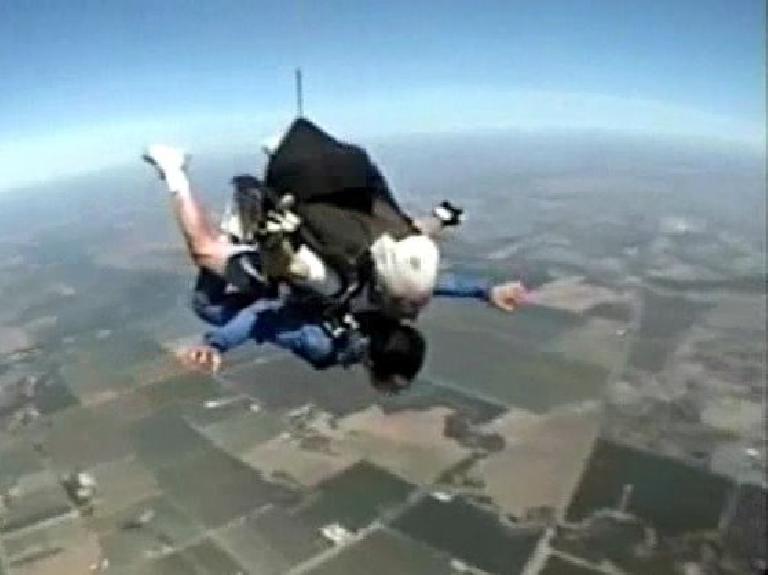 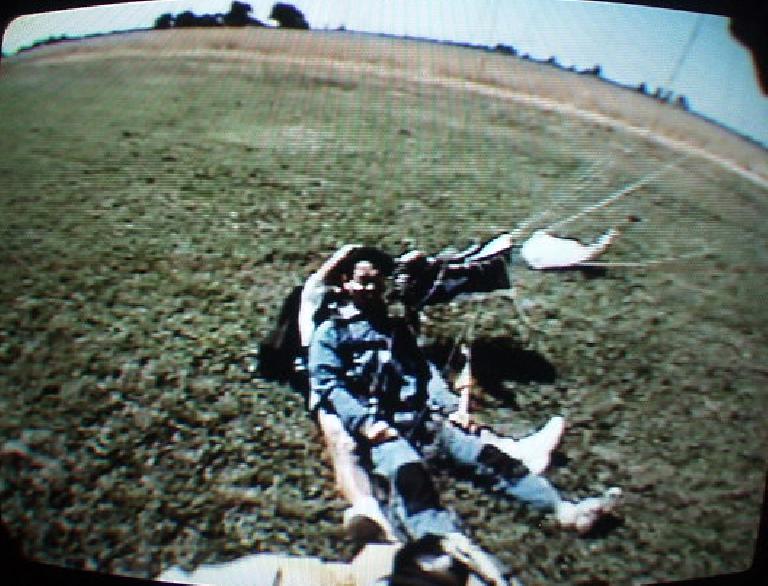 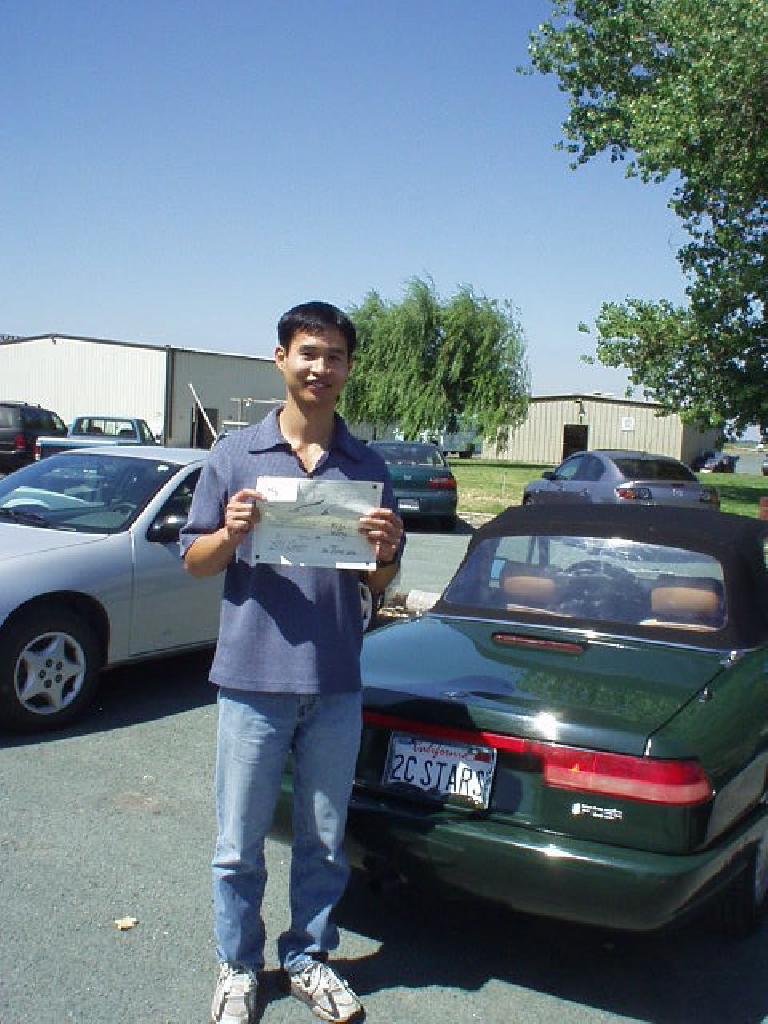