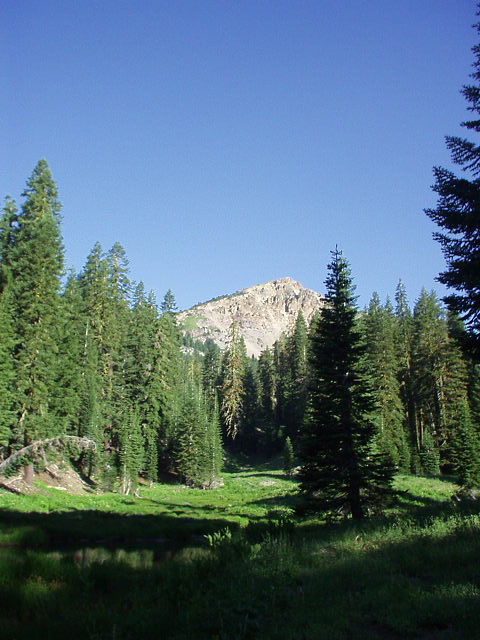 This hike was not originally on the agenda; however, after having lunch with a friend in Sacramento I soon realized that I was not going to make it to Klamath Falls in Oregon by daybreak as I originally was planning on doing. So I looked at the map to find a closer place to camp, and not caring to return to Mt. Shasta—only because I did that 2 weeks ago already—I decided upon the Lassen Volcanic National Forest area. Upon busting out my California County Summits book I then also realized that there were 2 county summits—Brokeoff Mountain and Lassen Peak—within 7 miles of each other, and each of them should take no more than 5 hours. Perfect.

So at Red Bluff I veered off of I-5 onto CA-67, which quickly turned out to be one of the finest drives I had ever done. With the sun beginning a slow descent towards the horizon, reddish rays of light intertwined with the green leaves of towering pines gracing this two-laned road. Christmas in July. The road was certainly less-traveled, and preferring a peaceful cruise to some oldies (60s) music as opposed to an all-out sprint from apex to apex, I maintained a steady 55-65 mph pace, easily sustainable even through the sweeping curves that back-country roads are defined by.

Passing through the town of Mineral (really about the only sign of civilization out here), I then entered the Lassen National Forest, needing to self-register for 2 things: entry into the park ($10) and, later, a campsite ($14). When I got to the campsite, I was both surprised and pleased that there was not a single soul around. (Another party would finally come in at 10:30 pm, when I was already in my tent and half asleep). It made for a peaceful, good night’s sleep all right.

I commenced the hike up Brokeoff Mountain at 8:00 am in the morning, and proceeded at a steady, but not fast, pace. The air was certainly thinner up here, and I was being powered by a single energy bar (the only food I had in the car, which was bad preparation!) The trail at the bottom was ultra-narrow, threading its way through dense alder thicket, and I was glad I was wearing long pants. Half a mile later, the trail became significantly less claustrophobic, with the terrain dominated by pine, pine, and pine. A few streams had to be crossed (one of them I did a poor job doing, resulting in the full immersion of my feet into its muddy waters), and there were even some small lakes. Despite all the trees around, one does get a pretty good glimpse of the southwest-facing rock face of the top of Brokeoff Mountain.

Regarding the top: Brokeoff Mountain is a dormant volcano that was part of Mt. Tehama, which geologists believe was approximately 11,000 feet high before the Ice Age. Then, after the Ice Age, glaciers scoured away at the top, making it took like the peak “broke off”. Hence, the name.

Towards the top the trail got steeper, switchbacking among the now-dominant talus as the trees had mostly succumbed to the cold. At the very top was a level platform that could comfortably accommodate perhaps 30 people, but having not seen a single soul all morning I had this platform to myself. After admiring the views (Tehama and Shasta counties to the west and north, Lassen Peak to the northeast, and Sacramento County to the south), I did a few yoga stretches before heading back down the mountain at 9:45 am.

Knowing that I still had my Lassen Peak hike before me, and also wanting to go search for some food, I decided to run down the mountain. I was musing about how I *still* had not seen a single person when I encountered the first couple of the day, and exchanged pleasantries. Another mile later, there was a group of about 7 elderly women. “Is this the way to the top of Brokeoff Mountain?” one of the inquired. After I responded in the affirmative, noting that they had perhaps 2 miles to go, another one of them asked, “Are you running the whole way?” I replied, “Well, I walked up, but then got inspired and ran all the way down,” and yet another one replied, “I remember when I was young!” She then paused and added, “But not quite *that* young! Have fun!”

The hike (run) was indeed fun and I was back down by 10:30 am. Still time for breakfast. The weather was just warming up!

Doing this hike tomorrow and really enjoyed reading your post. I absolutely LOVE this area, but have never gotten to this before. :) ↩Reply