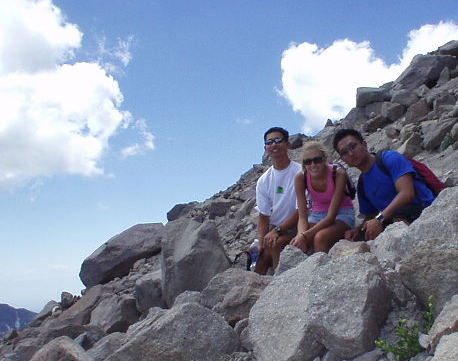 From Brokeoff Mountain, I drove 6.8 miles up the road to Lassen Peak, intent on bagging my second California County Summit of the day. (Lassen Peak, at ~10,500 feet, is the highest point in Shasta County.) What had intended to be a quick 5-mile round-trip hike up and down the mountain turned out to be a slightly slower-paced, but vastly more fun, experience than I had anticipated.

This is because 1 mile up the mountain, I ran into a guy and a gal who had stopped to take in the view and to get a little bit of a breather. “Hi, how are you?” I asked. “Great… do you mind taking our picture?” was the guy’s reply. The next thing you know we were chatting, and after they had asked if I had come alone and I replied in the affirmative, they welcomed me into their little group and we proceeded to hike to the top together.

“This is my third time doing it,” said Jamie, the gal. “And each time I forget how tough the hike is.”

The guy’s name was Ryan. He recently graduated from UC Irvine and was enjoying a little time off before jumping head-first back into the workplace. Jamie was a 20-year-old still in school, had lived in Huntington Beach but now lives in Fairfield. Ryan had come up to visit her for the weekend. I can’t blame him—she was really cute, with long flowing hair tied back in a pigtail, and a brilliant tan. “I’m half Native American,” she explained, “Cherokee tribe. But don’t ask me how I ended up with blue eyes and blond hair, beats me.” She also had a bubbly personality, so despite her warning that she “complains a lot”, I certainly did not mind!

Like Brokeoff Mountain, Lassen is a volcano (it last erupted in 1914, blowing off a small visitor’s center that was at the top). In contrast to Brokeoff Mountain, Lassen is much more barren with its surfaces dominated by talus and patches of snow. The bottom half is perhaps the steeper and more tiresome section to hike up, but near the top are 40 switchbacks. There were a lot of people doing this hike, including old men who looked like this was the first time they had gone hiking in a year, to women carrying babies on their backs. Coming down the mountain was an entire church/scout group (of the Latter Day Saints of Jesus Christ) wearing yellow “Lassen Peak 50-miler” shirts. Upon inquiring, they told us that they had started on Monday at some lake way down below, over a ridge, up Lassen Peak, and now they were in their final miles. Sounded like a great trip.

The top actually has 2 peaks, where the taller peak is the farther one and requires traversing a slippery snow field. We had a quick lunch on the lower peak (Ryan and Jamie gave me some Cheez-its while they munched on some “terrible” turkey sandwiches), and afterwards we headed for the real peak, which required scrambling among some talus and scree, occasionally using our hands. The view, we agreed, was well-worth it.

We then headed down the mountain, with Jamie entertaining Ryan and me by occasionally losing her balance and subsequently doing surfer poses. Apparently, down in Huntington Beach she was a real surfer girl, and I could imagine the Beach Boys picturing her when they wrote their songs about surfing and California girls, etc.!

When we got back down to the bottom, it was 4:45 p.m., or 4.75 hours after I started (and 2 hours longer than my mmorning hike up and down Brokeoff Mountain, despite that being 2 miles longer), but as I said before, it was a lot of fun. Good company helps make this so, and after the hike, I was slightly sad to say goodbye to my new friends.