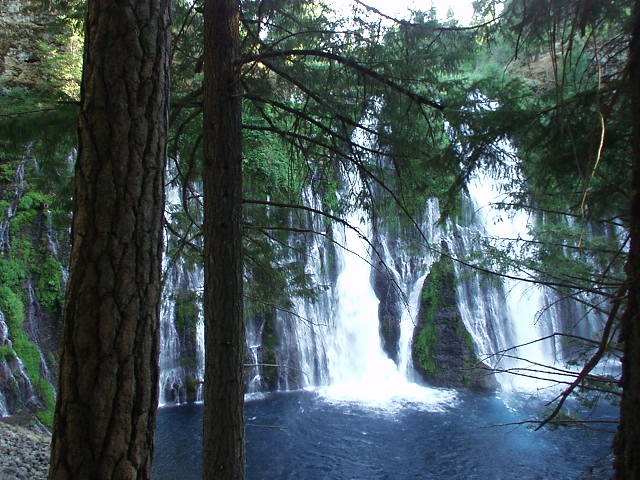 The year was 1990, with 9th grade in its final weeks. For one of our last homework assignments, Mrs. Hall, my social studies teacher, had asked us to write down our vision of “an ideal day” in the future. What would we do, where we would go, and how would we get there? The latter, for a sports-car dreaming guy was easy (never mind that it would still be a couple of years before I could drive)—it would be in style, in either an MG or Alfa Romeo, in British Racing Green. The “where” would be a little harder. In haste, while flipping through a picture book of California State Parks, I searched out for the most beautiful photo, deciding upon… Burney Falls.

I pondered about this vision as there I was, in 2005, behind the wheel of my Foglio Green (very much like BRG) Alfa Romeo Spider, leaving Lassen Volcanic National Forest and heading north towards those hallowed falls. The highway—CA-89—was as smooth as rails for a freight train, and was lined by whitebark pine standing as tall as soldiers greeting their king. Red needles mingled freely with their green brethren at the top of these trees as a gentle breeze carressed them all, much as the wind soothingly flowed through my hair as I took to the sweeping curves of the road, the Alfa’s melodious exhaust note trailing behind.

If this was not appropriate a road to one’s own Mecca, I do not know what is.

From Lassen Peak, it took an hour’s drive and a 1/4-mile hike downwards from the Burney Falls parking lot, but at last, there they were—dozens of streams threading their way over a rock wall, filtered by brush, dropping 129 feet into a 22-foot-deep watering hole, whose greenish-blue waters were home to many large trout. Whereas the temperatures at the level of the parking lot approached 90 degrees even this late in the evening, the water spray from the falls had a profound cooling effect on the basin below, enough that I was most comfortable wearing long pants and a black windbreaker, all while munching on some trail mix, and then solemnly reflecting, reflecting.

Why did it take so long for me to get here, I wondered? In a time when I take pride in setting and reaching goals, why did it take 15 years to make this vision become a reality?

Perhaps it was the haste of doing Mrs. Hall’s homework assignment made me take this vision less seriously. After all, aside from seeing that one photo in the CA State Parks book, I knew nothing about Burney Falls, including (until a few days before this trip) knowing where in California they were. Dreams of my adulthood—be it Paris-Brest-Paris, or climbing Mt. Shasta—were surely more urgent, and accordingly, more attention in recent years was given to them.

Then there was the matter of evolving tastes. Whereas back in 1990 my “ideal” roadsters were MGs and Alfas, later on in the decade, the sports car market had further offerings, and coming with a good job and income, my tastes had become somewhat yuppified. In 1998-99 there was the Porsche; in 2000-2003, there was the beloved BMW Z3. It wasn’t until September 2003 that I went back to my roots, acquiring the car whose design was long on tooth but I had much admired, the descendant of Ben’s Alfa Romeo Duetto in the 1968 movie The Graduate.

Whatever the case, here I was, now in front of the falls, and I continued musing as I strolled along the “Falls Loop” as the sun steadily dipped towards the horizon. Then, as I got into my car and drove away from the falls, some words reverberated through my mind that were spoken to me just a couple hours previously.

“I want your life!” remarked one of the attendants at the booth where I went to reserve a campsite for the night. “You have a nice car, nice bike, and even a nice tan.”

Indeed, it was not a bad life. Nor was it a bad dream, even if took a while for it to come true.