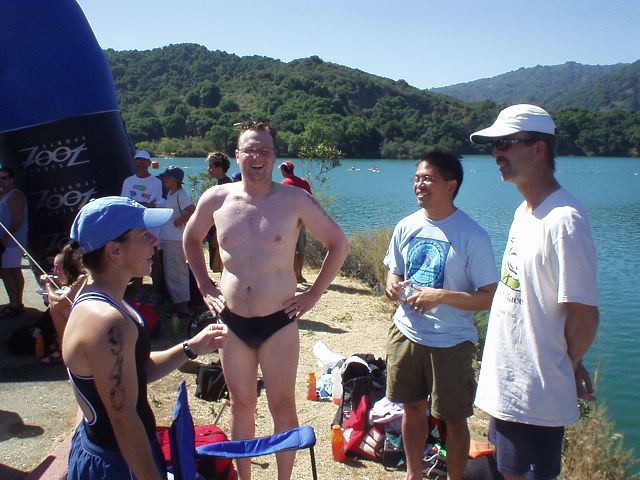 I got less than 5 hours of sleep in order to come be a spectator at the annual Catfish Swim due to the Bay in a Day Double Century the day before, but I was glad I came—many of my friends were participating. These included Peggy, her friend/mentor Janet, Sharon, Steve, Peter, and his friend Domingo.

It seemed like each of them were happy with how they did, with several noting that the waters were nice and warm—enough that none of them used a wetsuit. Steve’s goal was to come in at a time equal to that of his best wetsuit swim (for 1.2 miles), which I think he did, or at least got very close to. Sharon was aiming for 1:05:xx, since her time at last year’s Catfish was 1:06:xx. Amazingly, she came in at 1:01:xx, which was good enough for 3rd place in her age group! I was both amazed and very proud of her!

To cap off the event, my friend (and fellow cycling enthusiast) Adam rode his bike over since he lived just a mile or two away. I was glad he could come, since this was the last day I was going to be in the SF Bay Area for at least a couple of months, having recently sold my home and about to commence a Great American road trip. That I could see him and the others all at this one venue made me very happy.