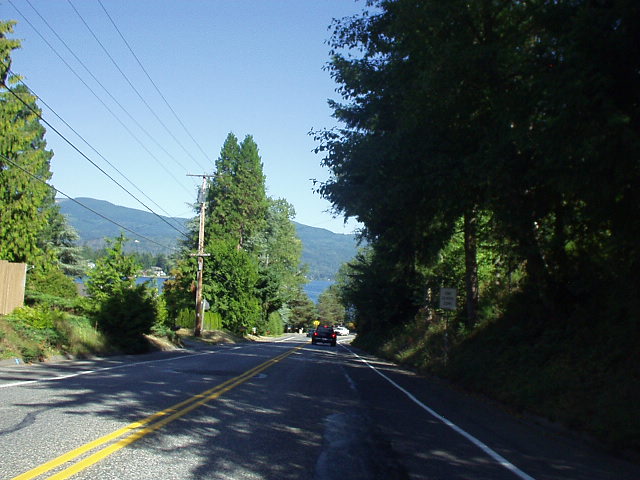 Now Bellingham was a wonderful surprise! Though I was aware of some of the accolades garnered by this town of 61,000 people, I never put it on my “prospective cities” list due to all of the rainfall I think it gets. Initially I just planned on making a quick wi-fi pitstop in this town before crossing the Canadian border. It turned out Bellingham, with a cute downtown and waterfront, plus Lake Whatcom on the east end of the city by evergreen foothills, in addition to rolling winding roads with peek-a-boo views of Mt. Baker, is really nice! I ended up spending a lot more time here than I planned, but a whole lot less than I probably should have…

Anyhow, from the short time I spent there, these are the impressions I formed. Attempting to equate one city with another is usually pretty futile, but with the harbors downtown, Lake Whatcom nearby and green trees everywhere (including what appeared to be a dense forest blanketing the foothills on the east side of Lake Whatcom), the town reminded me of Coeur d’Alene. Indeed, both towns are becoming popular retirement destinations and have garnered a number of awards recently. Awards include everything from being one of the best “adventure towns”, to having the best air quality, to being a dream retirement location, etc.

Downtown is very clean and pleasant, with a fair number of galleries and cafes. Traffic is not bad, and neither is parking. Parking actually is inexpensive—a quarter buys you an hour in metered spots downtown.

Housing is another matter. It is on par with some of the suburbs of Seattle, which is to say a bit higher than the national average. A 2000 sqare foot home goes for about $300k (August 2000), and of course much more for places with a view. There are lots of homes with a great view of Lake Whatcom, the foothills, and/or city lights.

The roads to some of these homes were an absolute delight to drive on (and I imagine to cycle on). Not only are they lined with trees, they are smooth, winding, and rolling. They have a lot of a backcountry feel to them without being completely out in the boonies.

The Pacific Northwest weather could be a potential problem for some. It averages about 3 inches of rain per month, with more rain coming in the winter of course. When I was there in late August the weather was beautiful. It was sunny, and it never gets too hot here. The average high temperature in July is just 73 degrees Fahrenheit, so I imagine it never gets any hotter than low-to-mid 80’s. The average January low is a fairly moderate 35 degrees too (46F average high). While there is snow in winter, there is less than 6 inches in January (less in other months) for a total of 15 inches per year.

In contrast, Mt. Baker, just 60 miles away, supposedly gets more snow than other place in the United States. This makes for great skiing. The Mt. Baker area is also supposed to have some rock climbing.

On the northend of Bellingham are shopping malls that are convenient without looking gaudy. I did not encounter any “ugly” parts of town during my visit. I felt the people were friendly here.

I love your blog!! I am always on the search for where I want to be, where I will feel like....ah this is home.

Sure wish I had the talent to create a spreadsheet to help me figure it out!

I currently live in central Illinois, grew up here. Moved away at 18, now back for 10yrs and I want out. I HATE HUMIDITY :), I dislike gloomy winters, love snow, sunshine. I live in the southern Black Hills for 7 yrs south of "Custer" and I loved it there. But jobs are hard to come by.

Was looking at Bend, OR and read your piece on it. I need to go check it out.

Anyway, love what you are doing and appreciate the information shared.