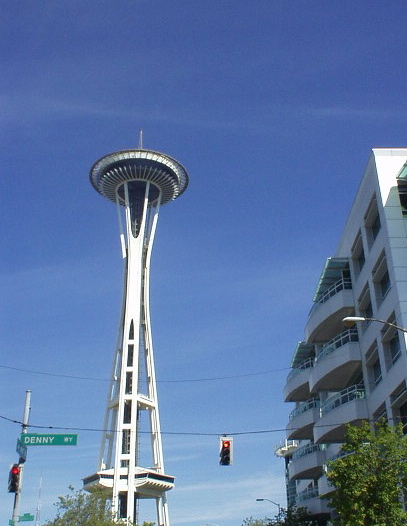 I used to liken Seattle as the hip younger sister of San Francisco. Now I perceive Seattle as the middle child in a family that includes SF and Portland. It has striking similarities to both cities while managing to retain a flavor of its own.

After spending a day passing through Mt. St. Helens National Volcanic Monument and Mt. Ranier National Park, I arrived in the town of SeaTac, which is aptly named due to being in between Seattle and Tacoma. The immediate approach to here was, of course, vastly different—expected, but still something of a shock—to my day in the woods. In contrast to delightful 2-lane country roads, I-5 pavement spanned 8-10 lanes and dominated by semis and SUVs whose flashing brake lights constituted the most interesting “views”. I was glad that I took the backroads route up here instead of the interstate.

Passing by all of the strip malls and fast food joints in this area reminded me that, yes, I am back in civilization, but nevertheless I expected to get some relief at Saltwater State Park, where I’d be camping that night. Saltwater SP is adjacent to the body of water south of Elliot Bay and Puget Sound, so I munched on a sandwich right next to where land meets saltwater. I reflected on how wonderful it was to be able to see the sun set on the opposite coasts of the U.S. within a 3-day span, having been at the beach in New York earlier in the week.

The solitude I experience on the western front was short lived, however, as I went to sleep in my tent. It was then that I remembered that Saltwater State Park is really close to the Seattle-Tacoma International Airport. One by one, commercial jets swooped down onto the runways just 4 miles away, emitting a “whoosh” vaguely reminiscent (at least in frequency of landings!) of Top Gun jetfighters touching down onto their appointed aircraft carriers. Throughout the night, every 100 heartbeats—whoosh. Whoosh. Whoosh. Although I managed to fall asleep somewhat quickly and was only awoken like, oh, half a dozen times, by morning’s time, I decided that this place was worse for camping than Viento State Park in Oregon. At Viento, a freight train would pass by every couple of hours and blare its horn at the very moment it passed by the campground. This horn was exceedingly loud, much louder than the jets. Nevertheless, I think I’d take that once every 2 hours instead of a “whoosh” once every 2 minutes!

The next day I opened up a Seattle weekly publication and saw a letter to the editor complaining about the “noise pollution” due to the Sea-Tac Airport being overtaxed with planes. No kidding.

Seattle is home to several aircraft corporations, the most notable being Boeing. The aircraft industry, along with a software industry spearheaded by the Evil Empire (by which I mean Microsoft of course), makes for a healthy hi-tech industry reminiscent of that of the SF Bay Area.

Ah, so back to my comparisons between Seattle and San Francisco and Portland. Traffic to Seattle on a weekday morning is decidedly San Francisco-esque. The cars that crawl along the interstate are somewhat more like those in Portland (i.e., less yuppie-ish than all of the Bimmers, Lexi and Mercedeses dotting the Silicon Valley landscape), but bumper-to-bumper nonetheless.

The roads in downtown Seattle are hilly like SF’s, and I got a good workout slipping the clutch and using the e-brake to go up-and-down these roads from a standing stop. Parking is almost as expensive and painful as SF’s, though if one is lucky and does not need to stop for more than a couple of hours, it is possible to find “Pay to Park” parking (utilizing the credit card accepting machines that are exactly the same as those used in Portland) along some of the streets.

Downtown Seattle is refreshingly modern and clean like Portland’s. And like its sister 200 miles to the south, Seattle’s streets are notably devoid of panhandlers and homeless people (at least relative to SF’s).

Like SF there are a number of architectural delights, with the Space Needle rising above them all in both a figurative and literal sense.

The weather, of course, is much more like Portland’s—gray and drizzly for maybe, oh, 8 months of the year, only to give way to sunny skies by late June or so. Temperatures are very pleasant in the summer and fall—much moreso than “the coldest winters I’ve ever experienced were the summers of SF”…

Demographically, Seattle is very diverse—less so than SF, but more so than Portland. There are lots of fit, attractive people in all three of these places. Seattle, like SF, also has numerous restaurants with a plethora of ethnic cuisines. In Capitol Hill alone I had some excellent Nepalese food for lunch and Ethiopian for dinner (the restaurant for the latter being recommended to me by Carolyn who lived here a couple of years ago… thanks, girl, wish you could have been here.) There were LOTS of Thai, Vietnamese, and Chinese-American diners too.

What else? Housing costs are happily much more like Portland’s than SF’s. It is possible to find a modern 2000 sq. ft. home in some of the suburbs like Tacoma for under $300k, though the same house in or closer to Seattle would probably go for more like $475k. I got the feeling that homes in Seattle itself were slightly more expensive than Portland’s, but still half that of San Francisco!

Of the three cities, which one is my favorite? I’d go with Portland, though my opinion is colored by the having many more great experiences there due to being there the most (of the three) the last few months.

For many, however, Seattle could be their cup of tea. Or coffee, as Seattle is certainly the coffee capital of the world. Being the middle child in a west-coast family consisting of the wonderful cities of San Francisco and Portland is not a bad place to be, not at all.