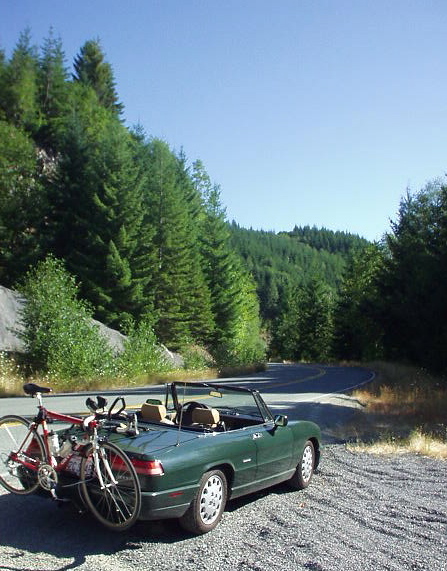 There are a few ways to drive from Portland to Seattle. The quickest, most direct way is along I-5 (~200 miles, or 3 hours). Of course, I chose to take the vastly more scenic route off the beaten path, along Routes 503 and 25, past Mt. St. Helens and views of Mt. Ranier, the highest point in Washington State.

This area was named for a battle that settlers at Fort Vancouver expected to happen in 1855 between U.S. Army soldiers and some Klickitat Indians. The battle never occurred.

Captain Strong, the post commander, allowed some Indians to leave the fort on the promise that they would return after burying their chief, who had been accidently killed. Most fort residents believed a battle would ensue to get the Indians to return, and therefore dubbed the spot “Strong’s Battle Ground.” The Indians, true to their word, returned peacefully, but the name took hold. Later the area was simply referred to as “Battle Ground.”

I camped there overnight ($10 for a tent site requiring an easy 1/4-mile walk-in) and had a very good night’s sleep. Very peaceful, with little wind, mosquitoes or noise of any sort.

From Battle Ground, I continued on what would be my most scenic drive since the journey from Brokeoff Mountain to Burney Falls through Lassen Peak National Forest last month.

“The Pacific Northwest is one of my favorite places in the U.S.,” stated a friend from Germany who lived in Seattle for a summer. I could see why. At least during this part of the year in this particular region in Washington State, the environment is very verdant, giving credibility to Washington’s motto of “The Evergreen State” (which alludes to the evergreen forests in the western part of the state; never mind the eastern part of the state is mostly semi-desert with long stretches without a tree!)

WA-503 near Battle Ground actually passes by flat farmland and barns, but as it approaches Route 25 past Yale Lake and the Swift Reservoir, its roads become rolling and curving. Route 25 was an even better (prettier) drive, lined by so many mature trees that sunlight would only trickle through, creating the perception of driving through a tunnel of trees.

25 miles or so south of Randle, I turned off onto Route 99 to the Windy Ridge Lookout Point towards Mt. St. Helens. In contrast to 503 and 25, Route 99 features far-reaching views of a volcanic wasteland. The destruction that the catastrophic eruption of Mt. St. Helens on May 18, 1980 is awesome. Acres of once-proud trees had been reduced to a landscape dotted by embers and tree trunks indifferently snapped in half by Mother Nature. The once-lush ground—while not exactly ashy—is still barren in many places with recovery not even starting 25 years after the blow-up.

Photos tell the story better than my words can. Photos are here.