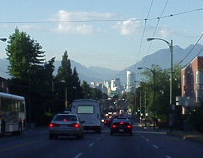 I finally made it into Canada. Getting past the checkpoint was no problem (just showed my CA driver’s license and passport, the latter used instead of a birth certificate), and soon I was among our peaceful neighbors in the north. Having had at least half-a-dozen friends tell me “you must see Vancouver, it is absolutely gorgeous!”, I was eager to see what all the fuss over that city was about…

At first, I was perplexed. Approaching the city through the suburbs, all I saw were cookie-cutter condos with little (if any) more character than those in California. Traffic was pretty bad. Then I saw it: Vancouver’s skyline, with its modern, glassy skyscrapers, some cylindrical among the more conventiionally square. These were tall buildings, maybe 80+ stories high, and yet, amazingly, they were absolutely dwarfed by Mother Nature’s granite mountains in the backdrop. I’ve never seen anything quite like it, yet could not help but think, “this is the way things should be like in a big city.”

Below are some notes from my trip. I did not get to spend nearly as much time as I would have liked to in the city. Ah well, need to save stuff for a future trip. : )