Take a drive east from Portland through the northernmost part of Oregon and your eyes will be captivated by two geological features that are the most recognizable icons in the entire state: Mt. Hood and the Columbia Gorge River. The former—shaped like an upside-down sugar cone glazed with white powder—towers over ponderosa pine forests, while the latter—maybe a mile wide—rushes downstream towards the heart of America, or at the very least, the center part of Oregon. These two icons define what is the city of Hood River.

I was actually tipped to city by a gal at a party in Portland a few weeks ago. “It has a cool downtown, with lots of bars and coffee houses,” she stated. “It is also close to one of the two ski resorts in North America where you can go skiing in July. Yet, since it is just east of the Cascades, it gets less rain than Portland.”

“Oh, and a lot of Californians have moved there because of windsurfing.”

Indeed, Hood River is the windsurfing capital of the world. I do not windsurf but even I could see why this would be a great place to do so: winds are consistently strong and favorable. In summer, the area is warm, sometimes getting up into the 90’s. The Columbia Gorge is, well, gorgeous. I could not blame the 50-100 or so windsurfers out in the gorge for taking to the waters on the beautiful Saturday afternoon I arrived there.

I ended up spending about 4 days in the area. Below are some of my impressions and observations…

Just about a mile from the shore of the Columbia Gorge River lies a 3 block X 5 block area comprising the city center. Here you will not find a single chain store, but plenty of clothing and antique stores, coffee shops (most with free wi-fi), and little restaurants. One of my favorite joints was Mission Style Burritos, where one can get a great-tasting, very satisfying “almost jumbo” burrito with your choice of meat and beans and whatever you want on it, made right in front of you, for just $2.75.

Lining the streets of downtown are vehicles representative of the sporting culture: Suburus, SUVs, lots of cars with ski racks. Every fifth car seems to have something mounted on it, like a surfboard (or multiple surfboard), mountain bike, or both!

Parking is not a big problem, though there are parking meters (a quarter will buy you 30 minutes).

Downtown actually is on the side of a hill, so you climb higher when you walk towards Oak or State Streets. From these streets one can get a good view of the Columbia Gorge River and can even make out the sails of the windsurfers.

If the cool downtown does not meet always meet your “big city” needs, then Portland is just an hour’s drive away.

In addition to windsurfing, one can presumably go kayaking and swimming in the Columbia Gorge River. Indeed, every summer there is a 1.1-mile swim across the river which attracts hundreds of participants.

Another nice thing about being right next to the river is having a beach! On any given sunny summer day there will be dozens of sunbathers out there.

There are plenty of hills here and a lot of people who commute by bicycle to downtown struggling up these hills. The area looks good for cycling, though there is definitely more traffic along these routes than, say, the highways around Mt. Bachelor and the Cascade Lakes in Central Oregon. I will have more impressions on the riding around here after riding the Torture 10,000 century ride this weekend, which starts just east of Portland but should be heading this way in the Mt. Hood area.

Beacon Rock is a 800-foot monolith—supposedly the second largest in the world after the rock of Gibralter. Beacon Rock State Park is actually located in Washington across the Columbia Gorge, maybe 20-25 miles west of Hood River.

I wasn’t able to do any rock climbing there, nor did I see any rock climbers or bolts, but there are definitely routes—supposedly both trad and sport. It looks like a fun rock to climb, being so vertical. With views of the Columbia Gorge right below, I imagine that climbing it would actually be spectacular! One can also hike up it (via 50 or so switchbacks)… the hike is about a mile and is not too hard.

Smith Rock is about 115 miles (or 2 hours) south of here. Unfortunately, the nearest rock climbing gym seems to be in Portland.

Skiing here is supposedly fantastic, being in the Mt. Hood area. Supposedly, this is one of the few places you can go skiing in July, all while being able to enjoy the sunny skies and warm weather in Hood River.

Real estate prices seem to be about on par with Portland and Bend. The homes through most of the core part of the city, however, are older houses—some of them with nice views of the Columbia Gorge or Mt. Hood, but many of them kind of being drab boxes or bungalows.

Hood River area raises an intriguing possibility regarding taxes. This is because the Washington State border is right across the Columbia Gorge River about 2 miles downtown Hood River. So is possible to live and work in Washington—which doesn’t have income taxes—and shop in Oregon, which doesn’t have sales taxes. The fiscal advantages of this vary per one’s individual situations, and in my case, I suspect they would be minor. While Washington does not impose income taxes it does have B&O (business & operation) taxes, presumably applicable to self-employed people and corporations. Property taxes may be slightly lower in Washington, but vehicular taxes are higher.

Nevertheless, so it is possible to live in White Salmon, Husum, Bingen, or Underwood (all in WA), and still be under 20 minutes from the center of Hood River. Trout Lake is another 15 miles away. Property values seem to be quite a bit lower there than in Hood River, and some of them have commanding views of the Columbia Gorge, Mt. Adams, or Mt. Hood.

However! Going from those places to Hood River could be something of an inconvenience, if not from a time or distance perspective. For one thing, the bridge across imposes a toll of $0.75 (no biggee) each way, and the speed limit across the bridge is 25 mph. This is because the bridge is very narrow and driving on it is really squirrelly since the roadway is a steel mesh (grate). Pedestrians and cyclists are also not allowed on it, effectively isolating one from biking into or out of Hood River without using a car.

Also, going to those towns require going up slow switchbacking roads. The good thing is White Salmon (population ~2,200) has a downtown of its own.

That side of the bay is particularly dry, well not too much more so than the Hood River side, but very yellow/brown with trees. Since much of the land is undeveloped, some of these yellow, dead, long weeds are somewhat unsightly and depressing, not to mention a fire hazard. I guess my eyes prefer green.

The closest commercial airport to Hood River is PDX in Portland, 65 miles away. This would take an hour without traffic, but sadly, Highway 84 to Portland can have horrendous traffic at times. The lack of an airport closeby could be a problem for me.

Virtually everyone here looks particularly “sporty”, and no doubt the area attracts those really into the recreational activities listed above. Last Sunday while having coffee, I noticed that everyone (except for me) was wearing a T-shirt with some sort of event printed on it, shorts, and sandals. Everyone seems very friendly though, with people saying “hi” when you pass them, looking you in the eye when you talk to them.

From what I hear, the weather here is very much like that of Portland, with gray overcast days from November-June and many periods of drizzle. It does rain a little bit less than Portland, and going just a few more miles east will yield a dramatic difference.

The Dalles, just 20 miles east of Hood River, gets a whole lot less rain than Portland (~14 inches/year vs. ~48), but is also a whole lot more yellow/brown.

One thing about the entire Columbia Gorge weather is that it is extremely windy almost all of the time. I suppose this is what makes it such a good place to windsurf.

Hood River is a very cool place! Compared to Bend, it has the advantage of having the Columbia Gorge River and being closer to a big city (Portland). The disadvantages include not being as green in summer, yet having more rain in winter, and not having a commercial airport closer than 65 miles away. Rock climbing also is not as good (you just cannot beat having Smith Rock being closeby), and despite being less populated than Bend, Hood River seems to be more “populated” (maybe having an interstate going right by town makes it seem that way). For these reasons I think I would prefer Bend, though I could certainly be satisfied living in Hood River. 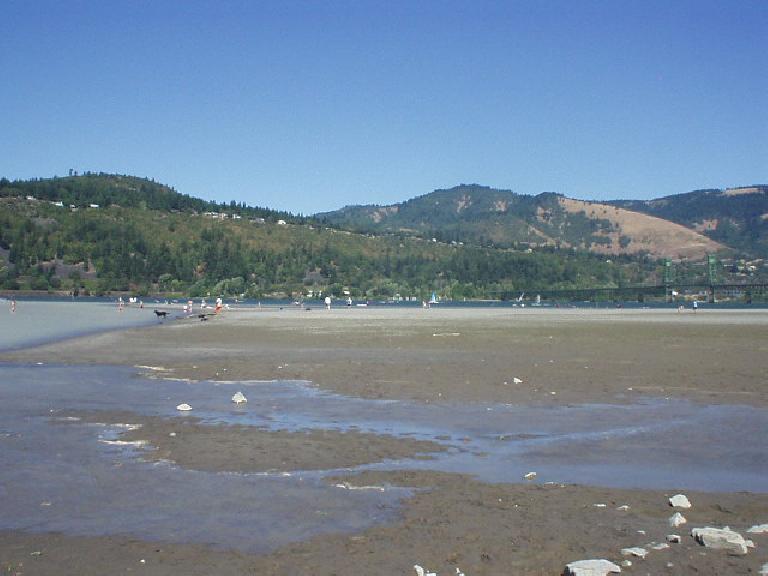 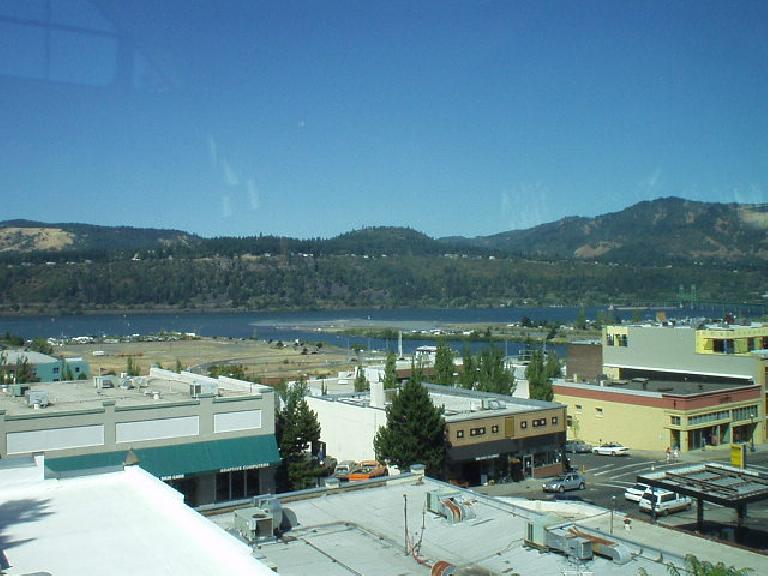 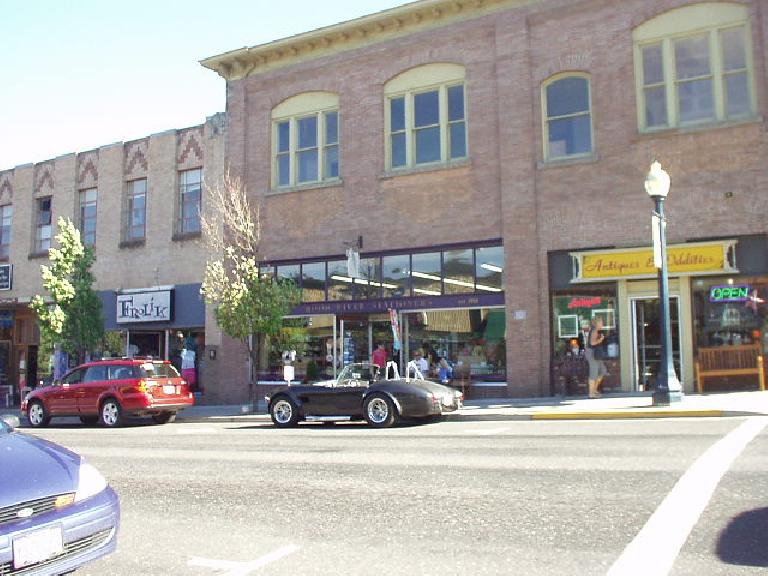 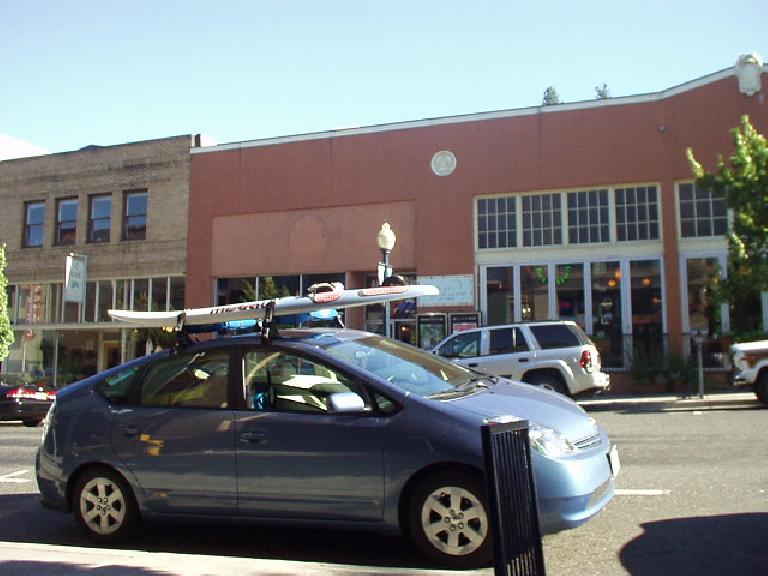 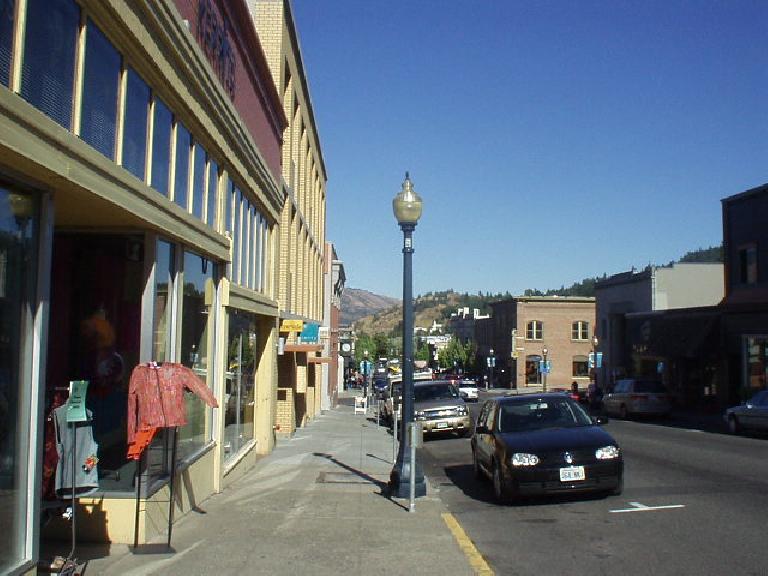 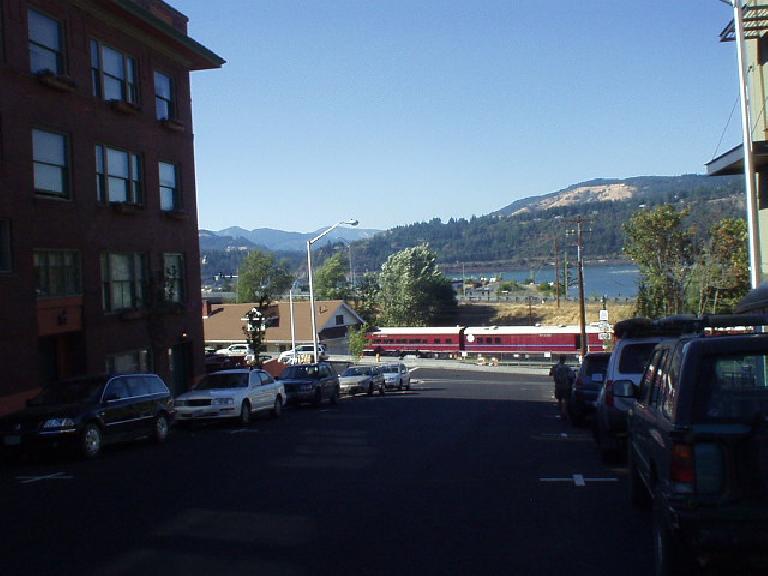 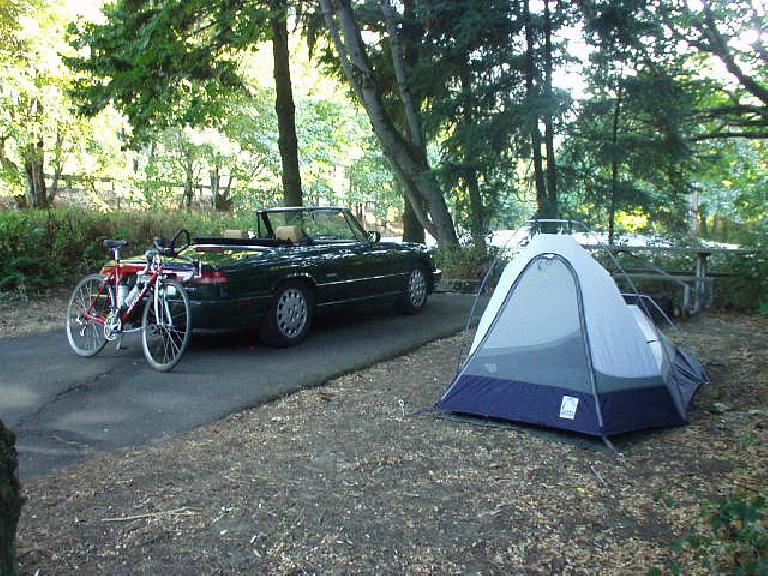 
Leave a Reply to Elie A'Steidh (its Gaelic) Cancel reply