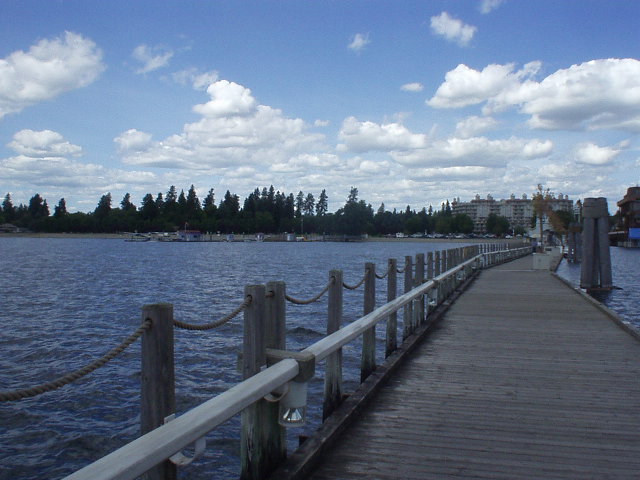 Two years after Ironman Coeur d’Alene, I got to visit my friends Deborah, Bob, and Taylor, who had cheered me on during the race (thanks!) I loved Coeur d’Alene back then, and I still think it is a great town although it sure felt different without the two-thousand or so Ironman triathletes prancing around on the streets.

For one thing, the town is a lot emptier and quieter. Demographically, most people you see downtown are older, greying folks with a lot less (well, no) diversity especially compared to Ironman week.

Unlike when I was here for that triathlon, I got the sense that this was a very conservative city. This could have been a pre-conceived notion, however (and the sight of lots of retired folk), as just north of Coeur d’Alene is Hayden–a town infamous for being the headquarters of the Aryan Nation (a white-supremicist group), where some of its members even ran for city council (fortunately, they lost). Mark Fuhrman, the racist cop from the infamous OJ Simpson case (who has amazingly written some well-selling books recently, including one about Terri Schiavo), also moved to Sandpoint, which neighbors Coeur d’Alene.

Despite the relative lack of people (a population of about 45,000 people, I think, when I visited), it is amazing how people in Cd’A complain about traffic. “Traffic has gotten so much worse!” a resident related, citing how he had to wait 45 seconds to cross a highway one time. I thought traffic was absolutely nothing, but it is all relative I guess.

Homes are being built at a rapid clip, however, as the population is growing quickly percentage-wise. Californians in particular comprise a large part of this influx. Housing prices, when I visited, had risen by double-digit percentages that year, accordingly. The sad part about this growth was that acres and acres of forested land were just being clear cut. This was in grave contrast to, say, Bend, Oregon–where growth is just as rapid but trees are largely retained to keep the town feeling like a picturesque mountain town. The clearcutting in Coeur d’Alene resulted in some rather stark-looking neighborhoods, especially with all of the new tract home developments.

That said, it was still a beautiful city. And the lake! Lake Coeur d’Alene has to rank as one of the most beautiful lakes in the world. The town is particularly popular with vacationing jet-ski and motorboat enthusiasts. It also boasts the largest floating golf course in the world.

In winter, there are several nearby ski resorts, so recreation year-round is abundant. Regarding the amount of snow here, there is enough that many people use snow tires or four-wheel drive in the winter. Temperatures seem pretty consistent in the winter with highs between 25-35. Not warm, but probably not as harsh as some of the northern midwestern states that regularly see high temperatures below 0.