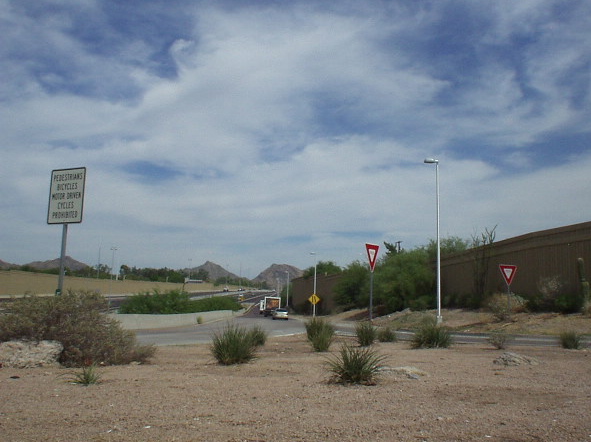 Note: Photos are finally posted! Glad to be out of Phoenix!

If a friend (whom I have known since we were, like, 7 years old) did not live there, I may not have even bothered to stop by Phoenix on this trip. Admittedly, my expections for this sprawling city were extremely low. Like, who in their right mind would actually want to live in a city which saw temperature highs of 100-115 degrees almost daily from the beginning of May to the end of September? (Apparently, over 1.3 million people!) That said, there have been some pleasant surprises.

First off, Phoenix is not some barren wasteland like the foothills of Boise or Pocatello as I first envisioned. Instead, the landscape is dotted with proud cacti, green brush around the city and many palm trees gracing the wide boulevards. On the periphery are jagged mountains, appearing as a silhoette behind an early morning haze. Upon closer inspection, I saw that they are covered with more scrub and brush and could make for some good hiking. Never mind that in order to hike them comfortably in summer, one needs to wake up and start super early, or so my friend says. I shall see shortly this weekend as we will try to go hiking first thing Saturday!

Speaking of super early, one interesting thing about Arizona is that it does not observe Daylight Saving Time. (Other such states include Hawaii and most of the Eastern Time Zone portion of Indiana.) However, the Navajo Indian Reservation does. Which brings me to throw up my arms and ask, “Why can’t we all agree on just ONE standard as it is all so arbitrary anyhow!” Sigh. So for the record, right now (late September) Arizona’s clocks are on the same time as California’s, even though Arizona is in the Mountain Time Zone and California is in the Pacific Time Zone. Got that straight? Never mind that for one full day I was operating 1 hour ahead of what I should have been; getting time zones straight has been an occasional problem during my road trip…

Anyhow, in additional to having mountains and cacti and palm trees, Phoenix is also much cleaner than I expected considering its high property and violent crime rate (209 MURDERS in 2001! Holy criminals, Batman!) From an aesthetic standpoint, Phoenix in my opinion is far more beautiful than any of the major southern Idaho cities I have seen.

More impressions. Despite the heat, Phoenix seems to have an active culture there, with lots of fit and healthy people around. Over the weekend we did two hikes—Camelback Mountain and Piestewa Peak. We got to Camelback at 8:45 a.m. which turned out to be way too late, as by the time we got to the top, it was probably high-90 degrees outside with no shade. We started Piestewa Peak the next day at 7:00 a.m., and already by that time the parking lot was full and there must have been a couple hundred hikers going up and down the mountain already. Yes, on a Sunday morning! I remarked to Esther, “I had never seen so many hikers on a mountain in my life!”

Later on Sunday afternoon I took a tour of Taliesan West, which was the winter home of Frank Lloyd Wright, the famous American architect. This was certainly the best part of my entire weekend and I highly recommend the tour to anyone who has any interest whatsoever in homes. Frank Lloyd Wright was truly a genius with unique vision and his home reflected that with several elements ahead of its time include embedded floor lights, home materials utilizing the natural resources (like rocks) of the surrounding environment, ergonomic chairs, etc.