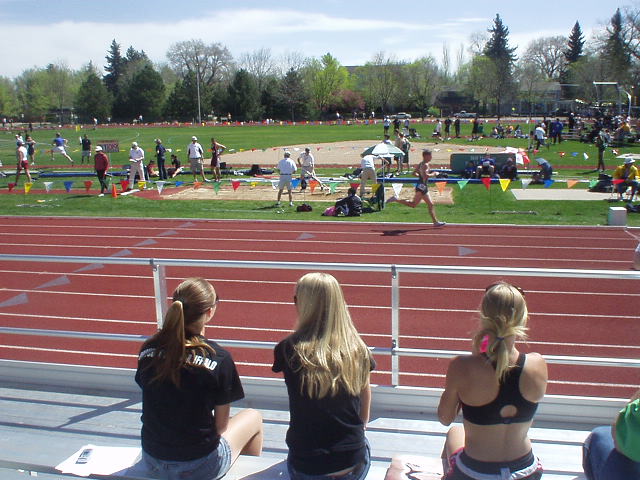 Following the Fast and the Furriest 5k I went over to the Jack Christiansen track meet at Colorado State University to see how real runners run. It was a beautiful T-shirt and shorts day and I got to watch a couple of races.

The first race I watched was the men’s 5k. I had hope to get some inspiration and run technique tips from it. While that may have happened, the event also made me feel very slow! Here are some impressions:

The fast people have both long strides and good leg turnover (I tried to quantify this by looking at my watch, and it seemed like everyone was running >180 steps/minute). The fastest person here—a guy from CSU named Josh—looked (and ran) like a comet with a long tail, the tail being his trailing leg. This leg would kick out far behind him until it was parallel to the ground. The slower ones—ones he had lapped by the 7th lap—were not picking up their trailing leg quite as much. (Note: no one was kicking up their trailing leg past parallel to the ground towards the butt, suggesting that doing so is inefficient.)

Josh also had powerful arm drive in which his shoulders would move also. He—like everyone else—ran fairly erect with not much forward lean.

He finished in 15:26, or over 6 minutes faster than my 5k time earlier that morning. Even the slowest person here would have beat me by a few minutes.

Following the men’s 5k was the women’s 3000m steeplechase. In this event, the girls had to leap over 4 hurdles and a water pit. Since the hurdles do not fall over if hit (unlike those used in hurdling), some of the runners were stepping on top of them. Also, most people were jumping into the water pit and then leaping out instead of trying to clear the water altogether!

All in all it was a gorgeous day to watch a track meet. More photos from the Jack Christiansen Track Meet are here.