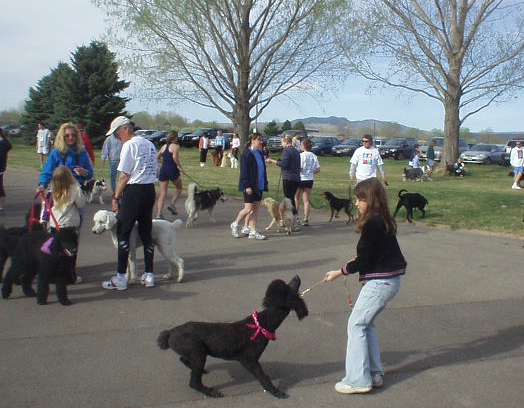 I was just past the half-way point of a 5k run when a woman hot on my heels was already muttering, “come on… come on.”

Was I going that slow?, I wondered. She could pass me if she wants! The woman eventually did pass, and when she did I saw who she was actually muttering to: a shaggy, brown, happy-looking dog. I think this was the first time I ever got passed by a furry four-legged mammal during a race.

Then again, there were plenty of opportunities for that during the Fast and the Furriest 5k, an annual run for both humans and dogs in Fort Collins.

I almost did not attend the race. I had read about the run in the local newspaper a few days before the event, but also noticed I had already missed the early registration deadline. “I am not going to pay a $25 day-of registration fee just to run a distance I normally run more than on any given training run,” I thought.

But then my friend Diana—who works for the vet school that hosted this event—mentioned she was going to run it. The clincher, however, was when Ryan mentioned the night before that she intended to go watch the race with—get this—a 4-foot-long iguana.

It turned out to be a lovely spring day, with 60-degree temps in the morning (80 degrees in the afternoon), no wind, and just a few clouds mingling with the Colorado sun. The race was fun—funny at times, such as when trying to run a “lap 2” which turned out to be an obstacle course of barking, panting dogs and barking, panting humans—and I didn’t even mind so much that 1) I was sucking wind after just 4 minutes until the end of the race and 2) I turned in one of my slowest 5k times in the last few years (21:41, or 7-minute pace.) It seemed like Diana also had fun with her borrowed dog named Athens, who Diana claims “really helped” and “was pulling me half the way!” Seems like Athens was a bit more cooperative than the one who kept causing her owner to mutter, “come on!”

Regarding the event’s only reptile, Kerchek, the 4-foot-long iguana was getting a whole lot of attention. Ryan and Kerchek even were on the 10:00 Fox 31 News later that night, so now the iguana can boast to his lizard friends about his 7 seconds of fame. Both of them had a lot of fun despite not being the fastest, nor the furriest.

More photos from the Fast and the Furriest 5k are here.