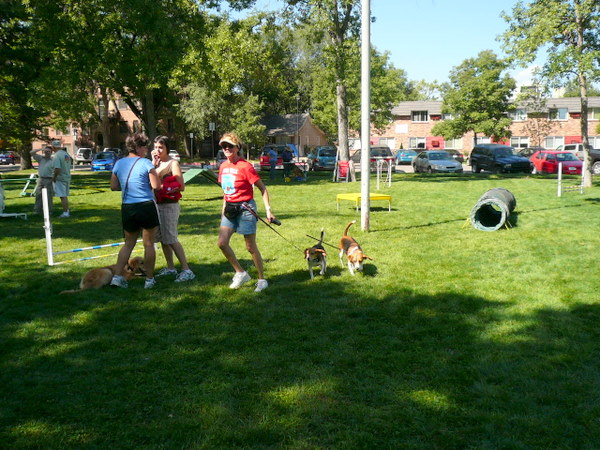 Maybe they were just tired after the 1.5-mile Annie Walk from the library to the railroad station. Perhaps they just needed some more Scooby Snacks. But somehow I was pretty sure that none of the dogs moseying around the animal obstacle course would qualify for the Doggie Olympics.

“Hey, these are like the dogs in Panama,” I remarked to Tori and her mom at one point. “They don’t even bark.”

Most, in fact, seemed to just be lying around on the lawn like it was the beach, completely disinterested in the hoops, tunnels, and hurdles within a paw’s reach away. Then there were the dogs who would just run right through the hurdles instead of over them.

Despite the dog lethargy, we still had a fun time. Especially because there was a Greek festival a few blocks away in Old Town where we were able to get some Greek food.

A few hundred feet from that was also a pet store we also visited. This is quickly becoming one of my favorite stores in Fort Collins not because I have a pet, but because there are so many things in there that make me smile.

For example, is it just me, or is this octopus funny-looking?

Because every discriminating pooch needs his own lavender octopus! ↩Reply